Coming to a Beach Near You…? 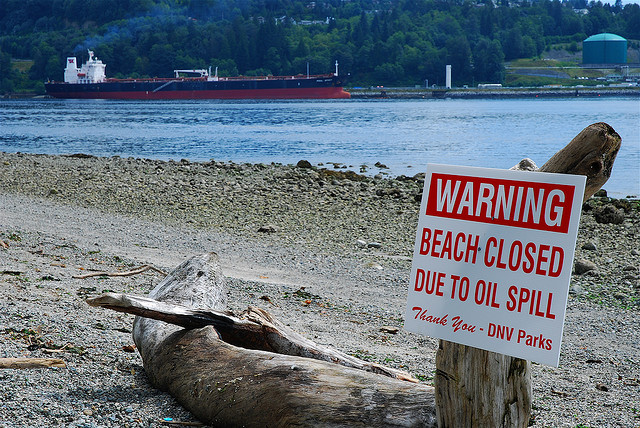 The April 8th bunker spill of highly toxic bunker fuel in Vancouver’s English Bay is a window into a dark future for the west coast if proposals go ahead for more dilbit-carryiing pipelines and tankers. The spill occurred in calm seas in an urban port where notification and containment should be relatively fast. This is not what happened. The slow response to the spill shows that the reassurances of the federal government and its regulatory agencies - that it is safe to add more dilbit pipelines and tanker traffic on the west coast - cannot be trusted.

The news of the fuel leak from a Cypriot grain tanker waiting to be loaded was well covered by local, national and international media. The inadequacy of the response was clear. The CBC noted the many Vancouver beaches affected by what was a relatively minor amount (18 barrels) of fuel.

In a recent interview, Elizabeth May highlighted how this event exposes significant weaknesses in Canada’s ability to respond to oil or dilbit spills. This is entirely under federal jurisdiction. Elizabeth linked the poor response directly with cuts made by Harper’s Conservatives to Environment Canada, the Department of Fisheries and Oceans (especially its Marine Mammal Contaminants Program) and the Coast Guard. Our capacity to prepare for and respond to fossil fuel spills has been decimated. Elizabeth noted a related issue - an oil industry-controlled private company is contracted to contain and clean up fossil fuel spills.

Was This Really a 'World Class' Cleanup of 18 Barrels of Oil? 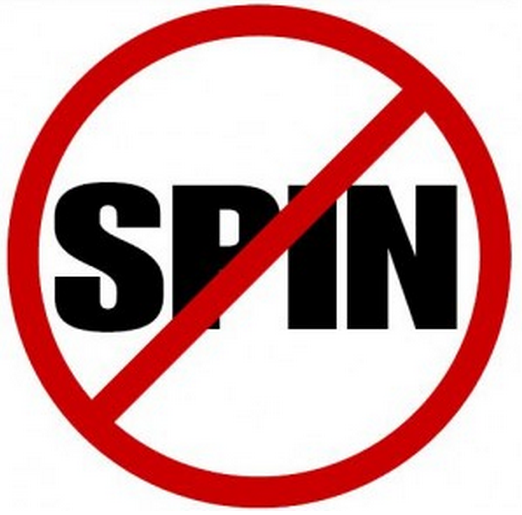 Federal Industry Minister James Moore defended the response by the Coast Guard and the private company, calling it “very impressive”.  Premier Christy Clark and the mayor of Vancouver completely disagreed.  Scientists were not impressed.

The former Commander of the Kitsilano Coast Guard station closed by Conservative cutbacks challenged the claim of 80% spill containment and recovery. He pointed out that recovery is 30% at best, more typically it is only 10% of a spill.

Elizabeth May clearly sees the federal cuts as an underlying problem and wants the Kitsilano Coast Guard station re-opened. This is already a critical problem – each tanker from the existing Kinder Morgan pipeline carries 800,000 barrels of diluted bitumin (dilbit) through the Burrard Inlet.

What's Next for Our Beautiful Coast? 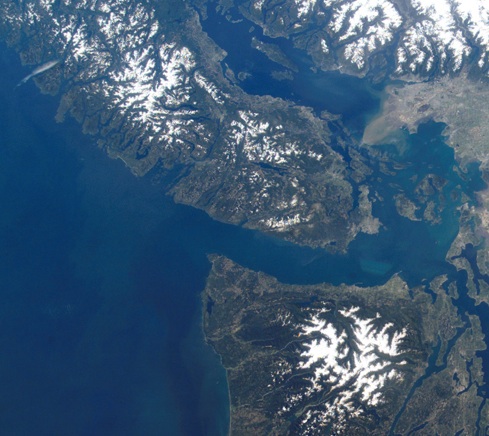 Many groups are concerned about the proposed, substantial increases in tanker traffic and pipelines in BC.

The Kinder Morgan (KM) pipeline expansion proposal would substantially increase tanker traffic from the Burnaby terminal through the narrow Burrard Inlet and into the Straits of Georgia and Juan de Fuca. Vessel numbers will go from five to up to thirty-five tankers monthly. Concerned Professional Engineers state that the KM pipeline expansion, “presents a high risk to the environment and to structures located along these routes.”

The Enbridge’s Northern Gateway pipeline project has Transport Canada's approval for up to 250 supertankers per year, travelling through the narrow Douglas Channel. The spill in English Bay that closed multiple beaches and rapidly spread over 12 km was less than 18 barrels of oil. Each supertanker could carry 2 million or more barrels of oil.

For both the Kinder Morgan and Endbridge projects, the company’s responsibility for cleanup costs ends when the tankers leave the Burrard Inlet or the Kitimat terminal, respectively. Taxpayers will pay for the clean-up of a major dilbit spill if it exceeds the $1.35 billion 'deductible' set aside for a cleanup.

On the positive side, two Green Party amendments to the the Pipeline Safety Act (Bill C-46) were adopted April 23, 2015. The amendments improve the recovery of public funds and compensation of Aboriginal Peoples in the inevitable event of a pipeline spill. These are the first Green Party amendments (of the hundreds proposed by the Green party since 2011) to be accepted for a government bill, and join the select few opposition-sponsored amendments to be accepted in committee in this parliament.

There is much more to do! Sign our petition No Tankers, No Pipelines. Support Elizabeth's re-election campaign. Volunteer for Elizabeth. 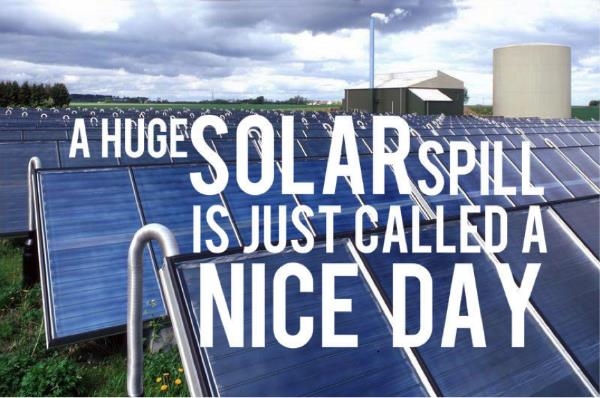 The recent spill in English Bay demonstrates that the federal government does not have the capacity to manage even small oil spills. Elizabeth May and the Green Party believe these risks are unnecessary for a prosperous economy.

This Greenpeace image emphasizes that there is a better future - a prosperous economy without fouled beaches, dead sea life, or oil companies profiting from pipeline leaks and tanker spills. We deserve more than politicians playing the 'blame game', while ignoring the facts that the marine environment takes decades if not longer to recover from an oil spill. Earth is our only life support system.

The Green Party of Canada’s vision is not one of “no oil".  It is “low oil” coupled with energy conservation and proactive policies supporting a sustainable transition to a low carbon economy. The technology for such a future already exists but only the Green Party has the political will and visionary leadership necessary to get there. See Elizabeth's response to a question on pipelines and tankers.

In a 2014 article in Island Tides, Elizabeth May writes, “The Green Party is the only party opposing any and all current pipeline plans. We need to ensure that by 2100 Canada’s bitumen production is going to petrochemical products, not fuel... it is both too valuable and too dangerous to burn.”

The cost of a “fossil-fueled” economy to BC, Canada and the rest of the planet is already higher than typically reported because externalities such as environmental degradation and healthcare costs associated with pollution-related illnesses are excluded. Five years later, BP is still cleaning up the massive disaster in the Gulf of Mexico. After spending billions for cleanup and reparations, it's clear the region will never be the same and the human health costs will only be superficially addressed.

It is not a choice between the economy and the environment. Greens see a future where we innovate in areas such as distributed energy systems, energy storage, and electric transportation AND make the best, highest value use of precious non-renewable resources. See Vision Green.

Pledge Your Vote for leadership based on a realistic “vision of an equitable and sustainable future”.  With you, Elizabeth and the Green Party of Canada can restore our democracy and enable positive change.

Was this newsletter of value to you? Please let us know.

Note: The Re-elect Elizabeth May Campaign Office in Sidney will be closed today for Earth Day April 25th. Please join us and wear green for the Earth Walk at 10:45am at the BC Legislature.

Elizabeth May 4th Anniversary, Friday 29th May, Sidney   Mark your Calendar & Get your Tickets!
How do we show our appreciation for Canada’s best MP?  Let’s celebrate her 4th Anniversary as our MP with a wonderful kick-off to the 2015 re-election campaign.

7:00 pm Program starts with wonderful speakers, more music, Green candidates and a speech by Elizabeth herself. You won’t want to miss it.

Reserve your free ticket here to avoid disappointment, but bring your chequebook.  There will be opportunities to donate to Elizabeth’s re-election with a caucus of exceptional Green MPs.
When: Friday evening May 29th 2015, 5:30 pm
Where: The Hangar at 9800 McDonald Park Road, Sidney