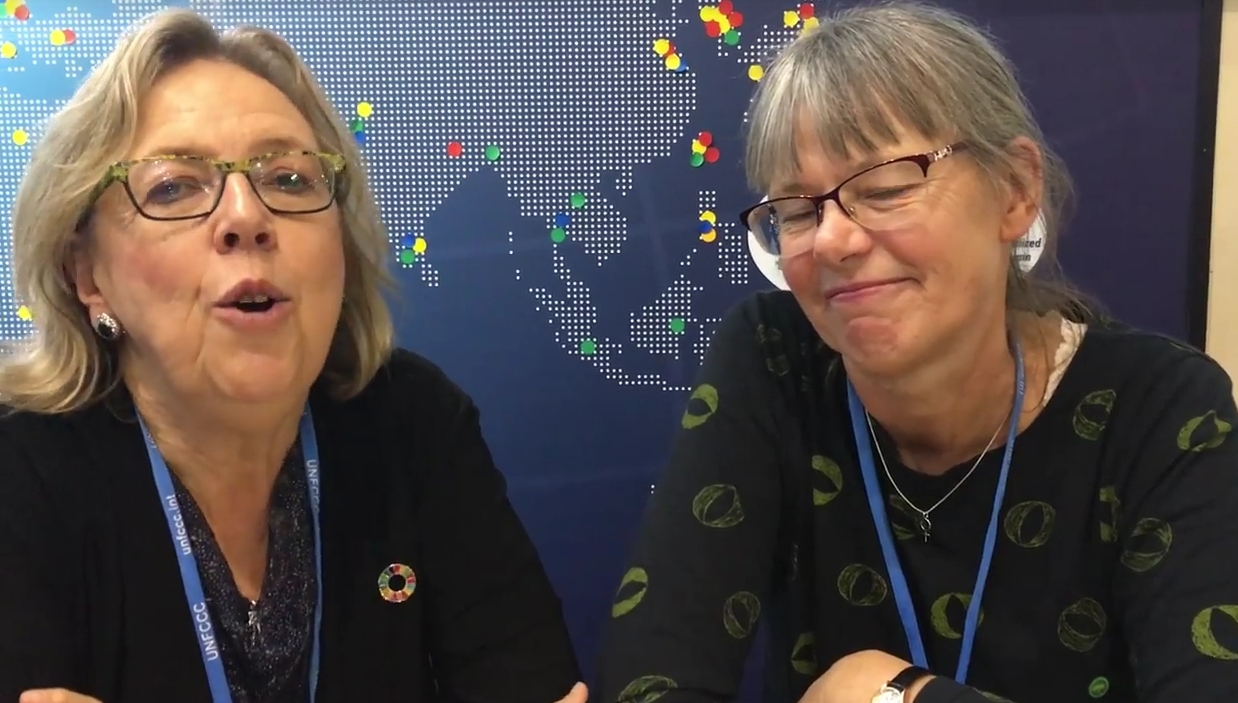 Late Sunday afternoon at Heathrow and changing planes en route home. I really should have written the wrap up blog on Saturday, but my mind played tricks on me.  I felt as though I had written it already from live-tweeting through the conference’s grueling last hours. But unless you were on twitter you missed it. So here’s a recap.

Friday night we were laying bets on when things would wrap up.  Most of the Canadians had left. Catherine McKenna departed on Thursday, and the core negotiating team stayed behind as did our Ambassador to Germany and former COP president himself, Stephane Dion. Dion now lives in Berlin so Bonn for COP was not a long trip. So Dion gave the statement on behalf of Canada Thursday night, but still in the backrooms the slow work of trying to find consensus on sticky points wore on.

“Sticky points” at this point are not deal-breakers.  The Paris Agreement holds, so the work of COP22 in Marrakech (which I missed due to my all-important responsibilities on the Special Parliamentary Committee on Electoral Reform – sarcasm intentional) and COP23 in Bonn have focused on detailed work on the “Paris Rule Book.”  Under the terms of decisions at COP21 in Paris, the rules must be sorted by COP24 next year.  The details include how does the world community assess the honesty and reliability of the self-reporting built into the system (country X promised to do Y; has it been done?), have the financial commitments that have been made proved equal to promises, how do we move programmes negotiated under the Kyoto Protocol over into the Paris Agreement.

Under Kyoto, the world – minus the USA (and yes, these elements were negotiated when Canada was still “in” Kyoto), created a trading system to allow rich countries to invest in carbon reduction plans in poorer countries and claim the reduced GHG from the poorer country to the richer country’s credit. This was called the Clean Development Mechanism, with rules that took years to negotiate. Similarly, Kyoto Parties created an Adaptation Fund to help developing countries adapt to climate change. This Fund had no trading elements. No “credits” move to industrialized countries, but there is a recognition that the rich countries are primarily responsible for the damage that is no laying waste to developing countries through increased intensity of severe weather events. Both the Adaptation Fund and CDM need to be dealt with moving under the rubric of the Paris Agreement.

Since the Warsaw COP, which took place in 2013, two years before Paris, the concept of needing funds for developing countries for direct damage from those events has been on the agenda. The principle of “Loss and Dmage” has been hugely controversial. The Obama administration would not sign off in Paris if it looked as though the US might be held legally responsible for massive flooding and hurricanes. Still, the principle, now caught up in the acronym WIM (Warsaw Implementation Mechanism) was in play in Bonn for further negotiation.

As well, Article 9.5 of the Paris Agreement contains language about future financial arrangements, but without details.

As well, at the opening of COP23, the African nations raised a new agenda item – that the Fiji COP (held in Bonn) deal with more ambitious action before 2020.  So the “pre-2020 action” became a new and critical element of negotiations in Bonn.

These elements were essentially what held up progress – and adjournment – in Bonn.  The US delegation was (no need for a spoiler alert here) unhelpful. But the US delegation did not absolutely derail the process.

Not controversial was the Fiji Presidency’s renaming of what is planned for 2018 at COP24.  In the Paris decision (falling outside of the Paris Agreement, so that is Paris was not legally binding by 2018, this process would still take place), it was decided 2018 would have a first global stock taking of how we are doing in the commitment to hold global average temperature to no more than 1.5 degrees Celsius above what they were before the Industrial Revolution. The COP21 decision called this “a facilitative dialogue.”  The Fiji presidency has renamed it “the Talanoa Dialogue.”   Talanoa is a Fijian word for story telling and the Fiji presidency offered a straightforward framework – one that would resonate with human communities around the world. Throughout 2018, in workshops and sessions around the world, the Talanoa Dialogue will ask:

Where do we need to be?

And how do we get there from here?”

Industrialized country negotiators gushed about how great the story telling approach would be, as there would be no finger-pointing; no blame.

So the late night work, originally set to resume at 8 pm, and then 9 pm, and then…. Resuming at 1 am, worked through til 7 am. Over that time, decisions from three separate bodies were gaveled through – the three bodies being, parties to the UN Framework Convention on Climate Change (UNFCCC- COP23), members of the Kyoto Protocol (CMP 13) and the meeting of the Parties to the Paris Agreement in their second meeting (APA.)  Each body and a number of subgroups, had to approve workplans and new executives and additional meetings to take place in 2018 where the sticky points remain unresolved.

This was a workman-like COP. It achieved minimalist success. One large bright spot was progress in the corridors pushing for adoption of the Kigali Amendment to the Montreal Protocol and to the Doha Amendment to Kyoto.

COP23 had no disasters. And it provided a back-drop for a number of exciting initiatives that encourage the global community. The US states and cities, as well as business leaders and environmental groups, banding together as the “We are still in” Coalition and the UK-Canada initiative for “Powering Past Coal” with the goal of eliminating burning coal for electricity by 2030 fall in that category.

The urgency of the climate crisis is not lost on the most vulnerable. In the wee hours of the morning I tweeted that the Maldives was “speaking truth to process” when it declared that the sense of urgency had diminished since Paris: “We are not moving fast enough. Current targets are far too weak to hold global temperature to 1.5 degrees.” A representative for the world’s youth urged, “Be brave. Be courageous. Be bold – 1.5 to stay alive.”

We have the path for 2018 leading to the worst of all possible host countries – okay maybe Australia would be as bad – but Poland is siting the next COP in the heart of coal production in that coal-loving country. The next 12 months must see citizen movements from all parts of the planet demanding that we stop sleep-walking, focusing on an orderly rule book, and start saving ourselves while we still have time.