Take Action for A Merrier Year Ahead 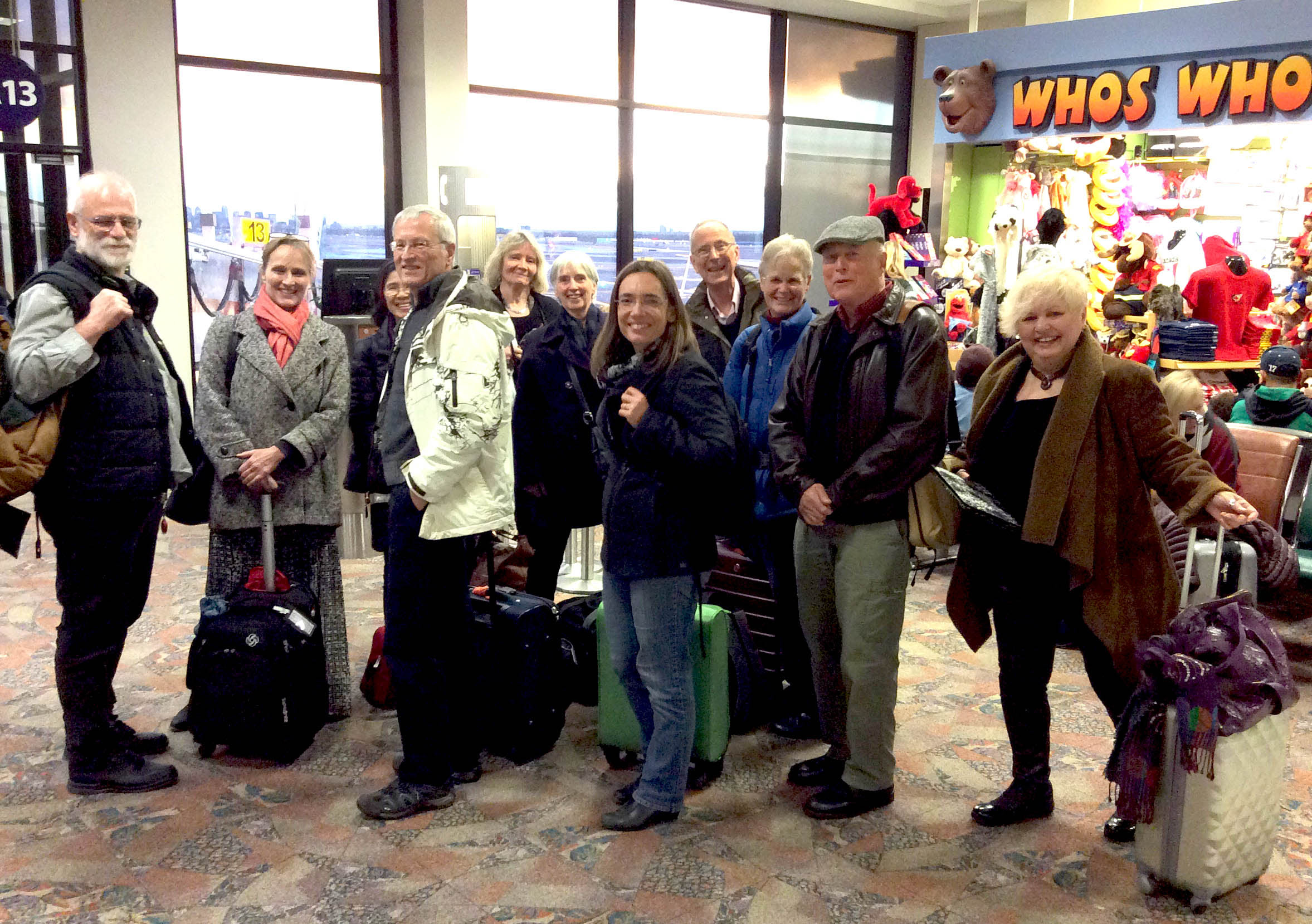 A huge thank you to all who attended, or helped others to attend, the Special General Meeting held in Calgary on December 3 and 4.

Saanich Gulf-Island Greens can be grateful, not only for our wonderful leader and MP, Elizabeth May, but also for the incredible efforts of our own Thomas Teuwen who inspired many participants from SGI and across Canada with his Unity Tour. Thomas encouraged us to be positive and take bold steps to keep building a Party we can proudly support as a real alternative to business-as-usual politics.

On the first day of the meeting, it did not seem quite so promising, more of an example of the saying about policy and sausage (i.e., you don't want to see how either is made). The next day, however, was a beautiful example of the power of working towards consensus. Read Elizabeth May's comments on the meeting here.

In Calgary, members of the Green Party of Canada clearly re-committed to consensus-based decision-making. There was positive action on a surprising number of key issues - strong support for Indigenous rights, including repudiation of the Doctrine of Discovery; a new resolution adding to our long-standing policy seeking peace in the Middle East with a balanced approach for the complex challenges faced by Israel and Palestine; an affirmation of proportional representation; and the first bold steps down the path to an improved process for policy proposals and directives.

Now to make this stick - all members of the Green Party of Canada are asked to support the decisions made in Calgary via an online ratification vote. Email notification of the vote went out December 7th with the subject line '2016 Online Special General Meeting'. The email has a link to the ratification ballot plus a unique password.

Elizabeth urges all of us to please vote in favour of the resolutions passed the Special general Meeting in Calgary! Voting is open until February 6, 2017. 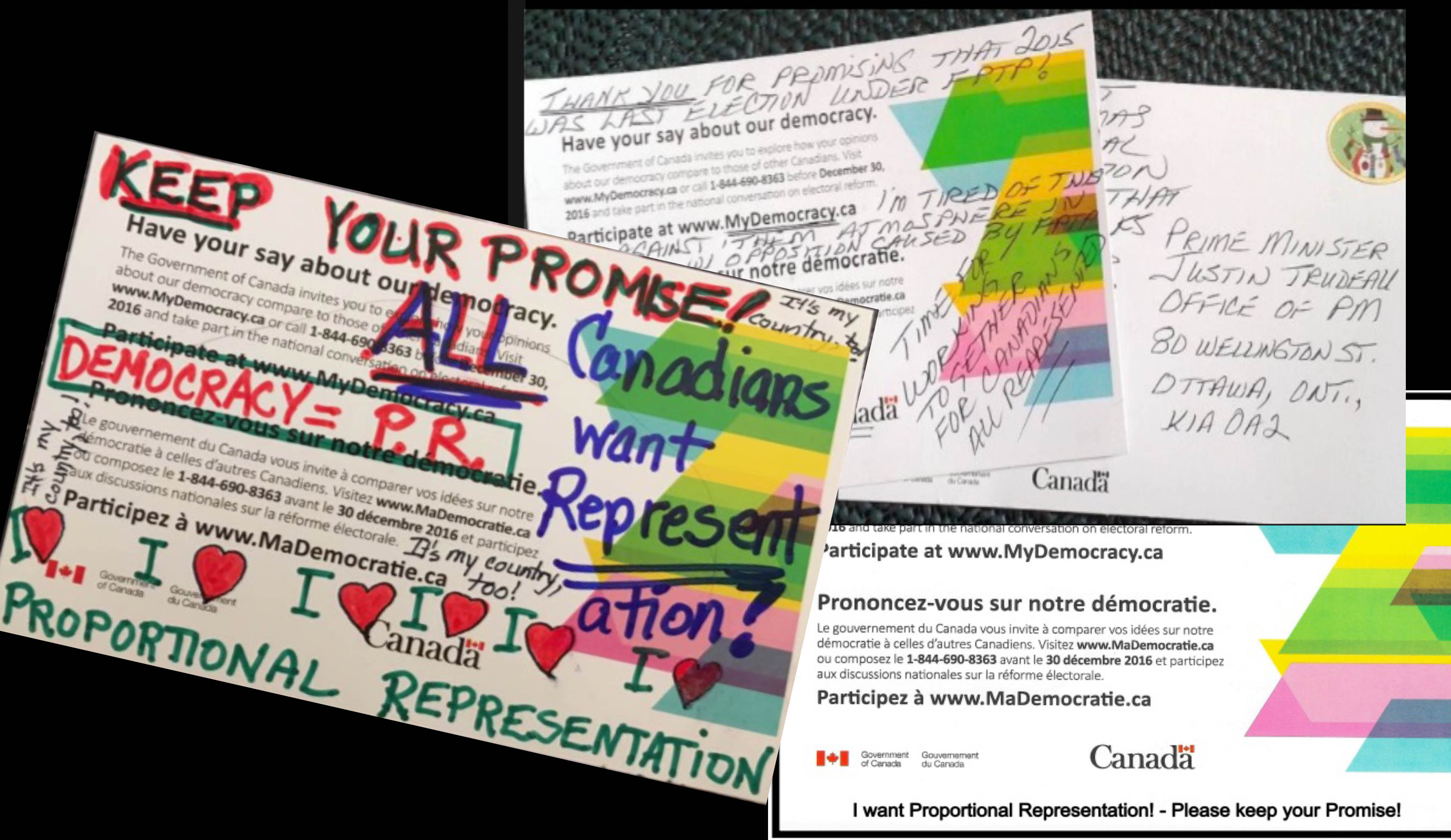 One immediate way that you can help is to complete the online survey by the government that is now underway, at https://www.mydemocracy.ca/. All Canadians were notified of this survey via postcards. Seize this opportunity, encourage others to do the same, and share your opinions broadly.

Although some of the survey questions are misleading, we encourage you to respond. Fair Vote Canada has more information on the survey and its limitations. Check their website here to decipher the survey: the myths, the traps and the facts.

To help ensure that the government receives a tidal wave of interest in electoral reform, our fellow Greens in the Barrie-Innisfil riding, led by CEO Bonnie North, had a brilliant idea - an action kit called "Operation Postcard". This link takes you directly to great ideas and useful tools that you can use to bring people together and make our voices heard via the online survey, social media, letters to the editor, and more. They even have an alternative postcard with 'I want Proportional Representation - Please Keep your Promise! that you can print and mail to Prime Minister Trudeau or Minister Monsef.

And, wait, there's more! There is another survey from the  GPC where you can provide more feedback to the federal government. Let's encourage all Canadians to let them know that we really do care about improving Canadian democracy!

The future really is in your hands!

Just in case you thought Elizabeth May might be slowing down after the herculean effort for electoral reform, here is her MP town hall schedule for January 2017. Please note - these are non-partisan events for all Saanich Gulf-Island constituents.