Another week - Another boost for a hopeful future 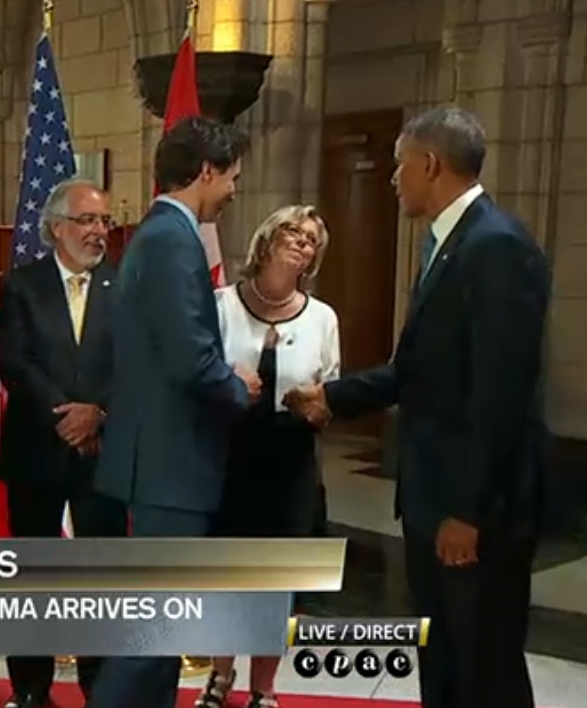 Another amazing week for Canada. Another amazing week for Greens and the values we champion. The North American Leaders' summit was striking in its focus on climate change and building a continental energy grid to transmit clean energy from region to region so we can move away from fossil fuels as quickly as possible. There was no mention of pipelines and refreshingly the word energy was not synonymous with oil. The primary focus on hydrocarbons was the commitment to curbing the wasteful and destructive methane leakage at existing facilities and a commitment to addressing shipping and aviation sources of CO2. But most significantly there was a clear signal that the Harper targets will be abandoned in favour of a shared 2025 target that aims firmly at the 1.5 degrees we championed in Paris.

Even the focus on trade in Prime Minister Trudeau's and President Obama's speech was deeply encouraging as there was no attempt to hide the disparity between those that have benefited in the past and those that have not. There seemed to be a recognition that in order for trade to be open and acceptable to the people of Canada it needs to address this injustice. I was still somewhat trepidatious about the sincerity of this until I listened to The House yesterday morning and heard the interview with Christa Freeland. When asked about Obama's focus on this injustice during his speech to Parliament, (around 3:10 in this audio file) minister Freeland reminded the audience that she wrote a book called 'Plutocrats. The rise of the global super rich and the fall of everybody else’  and it was her “very strong conviction and the result of my research that led me to write that book.” She goes on to recount how it was at her Toronto book-launch that she first met Justin Trudeau before he became the leader of the Liberal Party.

The CBC program then interviews Elizabeth (at 18:36). "It's a focus on climate as we have not seen it in the last ten years." You can also see an interview with her on CPAC where she talks about the need for new and aggressive Trudeau targets. And if the above picture isn't symbolic enough, this interview last Sunday with Elizabeth on Power Play underscores the role that Greens play in all this progress.  But that's not all, Elizabeth also attended the second meeting of the Special Committee on Electoral Reform and although it was in-camera and we don't have a video clip for you, the timetable is now set and the process is under way to create a made in Canada alternative to our broken electoral system.

On another front, this past week the Federal Appeal Court confirms what Elizabeth has been saying all along, that the Enbridge Northern Gateway pipeline consultation was inadequate. “We find that Canada offered only a brief, hurried and inadequate opportunity…to exchange and discuss information and to dialogue,” the court’s majority decision reads. And in this Financial Post article, which places the decision squarely back in the hands of the Liberal Cabinet, Sven Biggs is quoted as saying: “Either when they come to reconsider this decision by the court or whether it’s through the North Coast tanker ban, the Liberals will find a way to stop this project.” Well if that is true you can bet the oil lobby will push them all the harder after this ruling so let your voice be heard. Give them the support to shut this pipeline down. Investing in old world infrastructure really makes no sense as we move off our carbon dependency.

And speaking of making your voices heard, Fair Vote Canada has reached out to us to connect their letter writing team with ours. Elizabeth and Dan Palmer, our press secretary in Ottawa, keeps reminding us that writing letters and articles, especially to local newspapers on a regular basis, is such a powerful way to build public awareness about the issues that matter to us. They long for reliable sources of material that they can slot in when the opportunity presents itself so it's important we keep them coming.

We all know that Electoral Reform is extremely important for Canadian Democracy and now that the committee is getting under way we have the opportunity to support this initiative and help make it happen. So if you are a letter writer and would like to add your voice to this campaign please let me know and I will connect you with this national network of letter writers.

Come march with Elizabeth! Now that the Special Committee on Electoral Reform has a schedule Elizabeth is finally able to make some plans to be home for the summer. They include marching with Pride in Victoria next Sunday July 10th. Visit this events page to get the latest on where and when to meet. For other opportunities to meet up with Elizabeth this summer keep an eye on this calendar as it will now get populated with events.

The Pride Parade is followed by a multi-faceted festival, with two stages of entertainment, a beer garden, a food court, a giant vendor area, a kids' camp, and this year a newly added politically-oriented Queer Town. When the parade finishes at MacDonald Park (approximately 1:00 pm), BC Greens will have an information booth in the vendor area. If you would like to volunteer at the parade or at the festival booth, please contact Dekan Delaney at [email protected]

And finally on Saturday July 9th there is the paddle for the Saanich Inlet. Please RSVP to let them know that you may attend and receive updates. This event is weather dependent. By sharing your cell phone number it will allow the organizers to text and email you if they cannot "Paddle" due to weather.

Have a glorious week,
Thomas.
PS If you were inspired by Ann's newsletter to consider coming to our Green Party of Canada Convention, August 5-7 in Ottawa, just a reminder that there are some pretty awesome seat sales on right now you won;t want to miss.