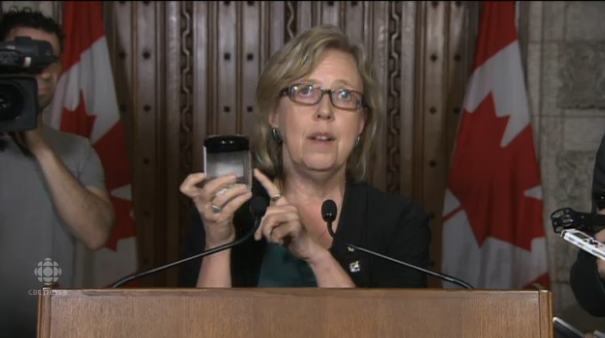 So if you are one of my readers who still believes that Greens don't make a difference, this might change your perspective. In 2014 when the NEB and the conservative cabinet gave the Northern Gateway pipeline the thumbs-up, Elizabeth made it clear in this interview that this was not in the national interest: "Raw Bitumen does not flow easily through pipelines..." And then she holds up a jar of the stuff and turns it upside down. Mixing bitumen with diluent is a particularly dangerous scheme. Why is any of this needed? "Because they don't want to build the ancillary infrastructure that Peter Lougheed and other Albertans had in mind so there would be upgraders in Alberta to turn this solid bitumen into Synthetic Crude that could then go to a refinery."

Later that year Elizabeth gave a TED talk in Calgary where she focused on our slipping capacity for innovation. "Value added sectors boost innovation. They spend more on R&D, they're looking around for things." So it's pretty relevant that during the same period of time that innovation and productivity was declining, we were moving towards more export of unprocessed raw resources. "At the end of the 1990s according to Statistics Canada, 60% of our exports were value added. Today, 40%. So we're tilting towards raw exports, things like bitumen that hasn't gone through refineries yet." Then during the campaign last year, Elizabeth reiterated that stance.

And now Robert Hage, a senior fellow at the University of Ottawa’s Graduate School of Public and International Affairs, had this to say in I-Politics: "The question of whether to refine oilsands crude in Canada has been hanging over the energy industry for more than a decade." He gets a few things wrong in this article, like implying that we might support an upgrader in Kitimat (give your head a shake), but he does recognize that Greens are winning this debate. "Many might think the Green Party opposes pipelines completely. Actually, the party’s literature and public statements by its leader, Elizabeth May, reference their opposition to “pipelines of unprocessed product to either coastline.” The critical issue for the Greens is the nature of the oilsands bitumen and diluents in pipelines (diluents are chemicals added to allow the bitumen to flow). The Greens’ solution is to set a level of managed growth for oilsands production and build upgraders and refineries near the Alberta resource; shipping a finished product, they say, involves a far lower risk of environmental impacts in the event of spills."

And so it is with other issues we champion. Greens believe in finding solutions that make sense and opposing those that don't. Greens believe in considering the long term consequences of our actions to safeguard the world for our grandchildren. Greens believe in conserving the principle in our environmental assets and focusing on spending the interest to build a sustainable economy. Greens believe in environmentally and socially responsible development as the world is waking up to a new reality. A year ago Elizabeth said: "We need a national carbon price and it needs to be fair to all regions." On Friday Bloomberg News reported: "Canada to Introduce National Carbon Price in 2016, Minister Says."

When LNG Canada refers to the 'turmoil' in the energy industry they are talking about a growing realization that the age of carbon based energy dominance is coming to an end. CEO Andy Calitz said in a conference call Monday that a drop in natural gas prices around the world, particularly in Asia, has made the Kitimat LNG project too expensive. So even the false assertion that we need Site C to power lucrative LNG development is now obsolete. Green values are permeating public discourse. To paraphrase Peter Bevan Baker, the leader of the Green Party of Prince Edward Island, "If you work hard and stick to your principles the almost impossible becomes almost inevitable." 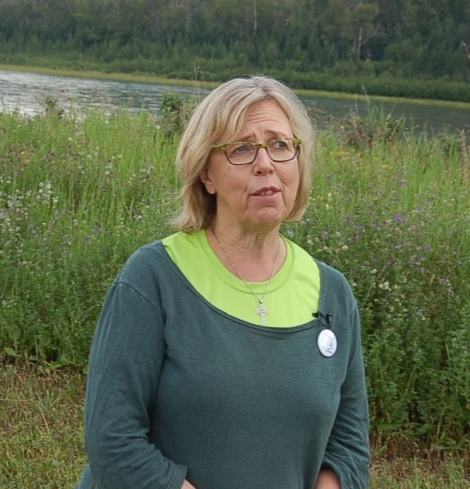 Greens believe in hard work and staying engaged. That's why we are building a national network of Greens active on social media. That's why we are writing letters. That's why we were paddling for the Saanich Inlet last weekend. That's why Elizabeth was paddling for the Peace the same day and then after coming home to march in Pride and dish out ice cream at the Saanich Strawberry Festival, attended the Assembly of First Nations Annual General Assembly in Niagra Falls Ontario. Last year Elizabeth was the only federal leader to get a standing ovation at this gathering. This year four ministers were present.

Carolyn Bennett, the Minister of Indigenous and Northern Affairs, Jody Wilson-Raybould, the Minister of Justice and Attorney General of Canada, Jane Philpott, the Minister of Health Canada and Catherine McKenna, the Minister of Environment and Climate Change all presented at this year's Assembly. Starting at 8:33 minutes Minister McKenna had this to say: "I've learned that true partnerships rely on sincere relationships. It's only through mutual respect and acknowledgement of the rights of Indigenous People that we can have a truly strong partnership... ...Unfortunately when our government came to power, trust in environmental assessments was very low... ...Our government is launching a comprehensive review of federal environmental assessment processes so we can take a hard look at what needs to be improved including with respect to the Canadian Environmental Assessment Act, the National Energy Board, The Fisheries Act, and the Navigable Waters Act. I ask you, please get involved."

And on Monday we have the opportunity to be involved again right here in our own community by participating in this nonpartisan Town Hall at the Mary Winspear Centre in Sidney. Elizabeth has invited the Honourable John McKay (@JohnMcKayLib), Parliamentary Secretary to the Minister of National Defence to hear from you. For more information click here.

Until next week week,
Thomas.