There are lots of activities to share with you this week so let's get right to it. But first a couple of takes on Trudeau's first year in as Prime Minister.

Trudeau's Report Card
"We are in new territory now and we need new tools. This is an administration with potential. While we firmly believe parliament and Canada need a much larger caucus of Green MPs, we hope for the Liberal administration to do the right thing – for Canada and for future generations. The challenges we face are too critical to be blindly partisan.

We measure the Trudeau administration’s performance against the Liberal platform promises and against the Speech from the Throne. The over-riding priority of climate change is one that touches many portfolios. As Bill McKibben has explained: This is literally a math test, and it’s not being graded on a curve. It only has one correct answer. And if we don’t get it right, then all of us—along with our 10,000-year-old experiment in human civilization—will fail." 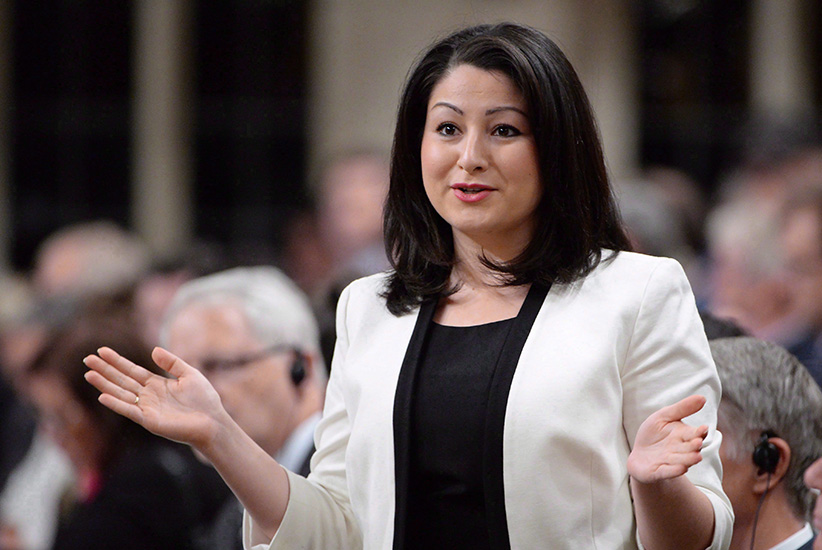 Electoral reform: Can the Liberals get it right?

"​The Liberals are in a bind on sweeping electoral change. But subtle fixes are in the works,"​ McLean's reports. "[They are] A long way from a breakthrough." And yet Elizabeth is confident. As this "Excellent summary of our process" from Fair Vote Canada shows, "Consultations Provide Strong Mandate for Proportional Representation." Elizabeth also prepared and submitted this in depth report about the town halls on ER held in her riding. Maybe some of that confidence comes from this observation that appears later in the McLean's article: According to Green Leader Elizabeth May, who knows her way around the federal corridors of power after decades of work on environmental issues, the change is already palpable. Political aides in Harper’s Prime Minister’s Office micro-managed almost any politically sensitive file. May says non-partisan public servants tell her Trudeau’s PMO staffers are far less prone to that sort of aggressive meddling. “Justin Trudeau is actually dismantling the concentration of power of the PMO,” she says.​ 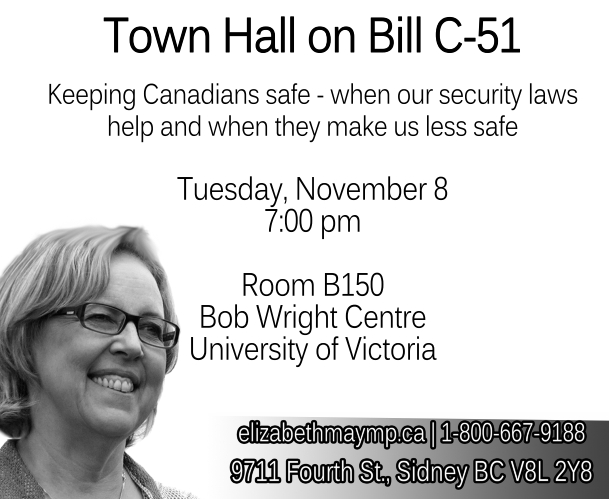 On March 4th, 2015 I shot this video of a fantastic Town Hall organized by the U-Vic Greens. Elizabeth was the first MP to ring the alarm on C-51, two weeks before the other opposition parties determined what strategic position would serve them best in the election campaign on the horizon. The Liberals decided to vote for C-51 and there was a point when it seemed that his miscalculation could cost Trudeau the election. On Tuesday November 8th you can get an update. Elizabeth is holding a town hall on Bill C-51 “Keeping Canadians safe - when our security laws help and when they make us less safe”  7pm  Room B150, Bob Wright Centre, University of Victoria. Twitter has already been active and you can read this backgrounder in which Elizabeth states: "The Liberals are pledging to get rid of any sections that are dangerous.  That’s pretty much the whole bill.  Here are its five parts and a rough sketch of what they do..."

Thursday November 10th join Adam Olsen - Deputy Leader of BC Greens, Elizabeth May - Leader Green Party of Canada, Jo-Ann Roberts - Moderator and Derek Masselink - Island Trustee for an open, public discussion at the Mary Winspear in Sidney - 7:00 to 9:00pm. They want to hear what you're passionate about and share what is important to you in BC politics. For more information, go to www.adamolsen.ca or visit https://www.facebook.com/events/1752602781656548/ and let them know your going.

You don't want to miss this event. Maude Barlow, National Chairperson of The Council of Canadians, is coming to town for our 'Eminent Speakers Series' event November 20th - Reserve your tickets now! This is an opportunity to hear from one of Canada's treasured activists, who among many other causes, has worked tirelessly and internationally for the human right to water! http://www.sgigreenparty.ca/maude_barlow  Please go to our Event page on Facebook & click 'Going'! And then please share from there, to show you care! 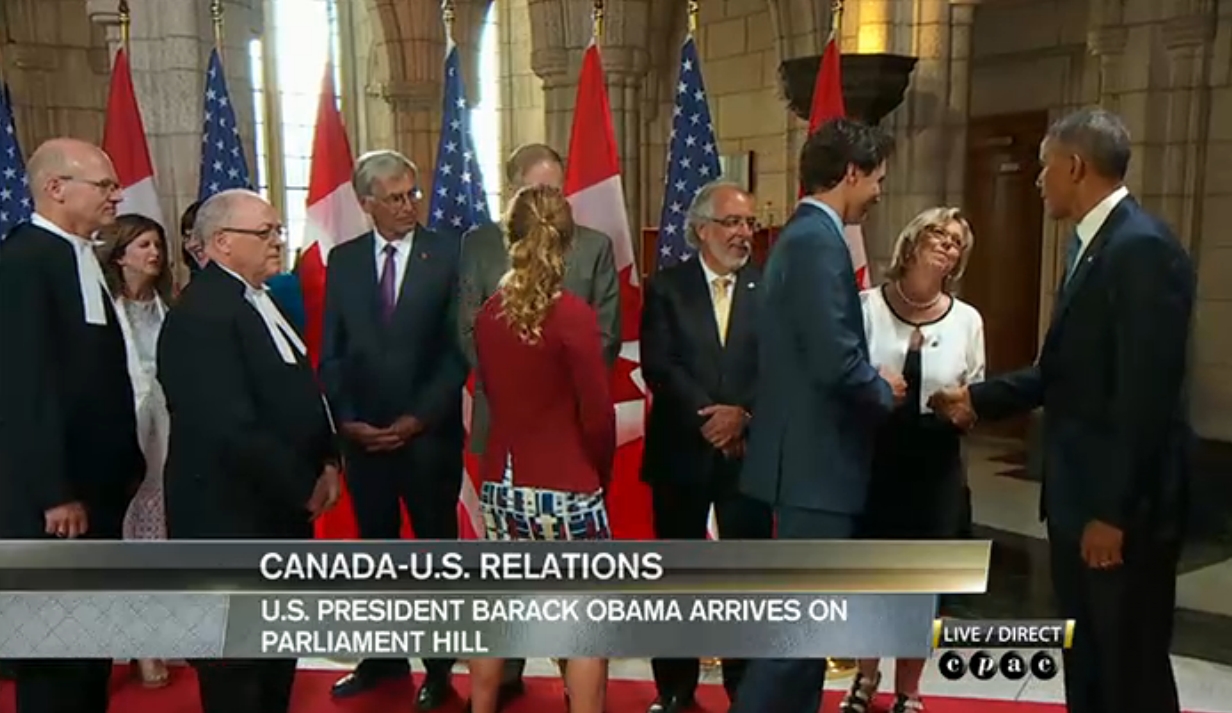 On the Road to Calgary

Now that the results are in from the ratification vote and Green Rules have been preserved, the discussion is shifting because we feel consensus in our bones. Even though it seems that activist organizations on both sides of the BDS divide have recruited new GPC members in time so they can vote at the Special General Meeting (SGM) in December, there is renewed hope that consensus can carry the day.  Our Unity Tour is drawing attention. Four more locations have expressed interest in our tour and we are now expecting to have nine events from coast to coast. They include Fredericton, Barrie, Ottawa, Guelph, Calgary, Vancouver, Salt Spring, Sidney and the Courtney/Comox region of Vancouver Island.

In preparation for the SGM, and in anticipation of Electoral Reform, it's time for us to collectively examine Who We Are so we can be clear in our support of our Leadership and our Federal Council. Other parties, including Greens in Germany and New Zealand have matured past this critical point in their evolution towards a governing party. With your help and participation we can too. Please join us in Calgary.

To start the discussion, these events will explore some of the current challenges facing the GPC, review three visions for the Green Party of Canada and how they can run at cross purposes to one another, and present some of the opportunities to learn from our German cousins by drawing on their experience. Then we will have plenty of opportunity for questions and comments to share our views on these important topics.

For the Sidney event you can register here. If you would like to attend the Salt Spring event please register here.  I've updated our Unity Tour page so please feel free to share with fellow Greens.

I'm looking forward to seeing you at one of the events.

Until next week, stay dry :)
Thomas