You've all received Ann's newsletter earlier this week reminding you how important it is to ratify the resolutions that we passed in Calgary. For those of you still unsure about the significance of these resolutions we've update our Calgary blog for your reference. Among other things you will find this link to our new revised policy on the Israel/Palestine conflict which, once ratified, will replace the controversial policy resolution passed at last summer's convention.

Many of you have also received the fabulous update from Elizabeth's Hill Office with the subject line "Elizabeth May: Week in Review." Here is an excerpt. 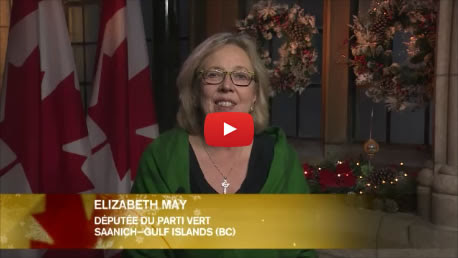 For the first time in Canadian history, a Parliamentary committee recommended that the government take concrete steps to move away from the archaic First Past the Post voting system and toward a proportional system of electing Members of Parliament and the Government

The report, an unprecedented document that compiles the best public and academic evidence available, will be an important milestone for reform. It confirms that the overwhelming majority of those who testified to the Committee favoured proportionality. Further, it tasks the government with designing an electoral system according to specified guidelines which will achieve acceptable levels of proportionality. By 2019, in the words of the Liberal Speech from the Throne, ‘every vote will count.’

Click here to watch the press conference held by the committee upon the release of the report.

Click here to read the full text of the report. 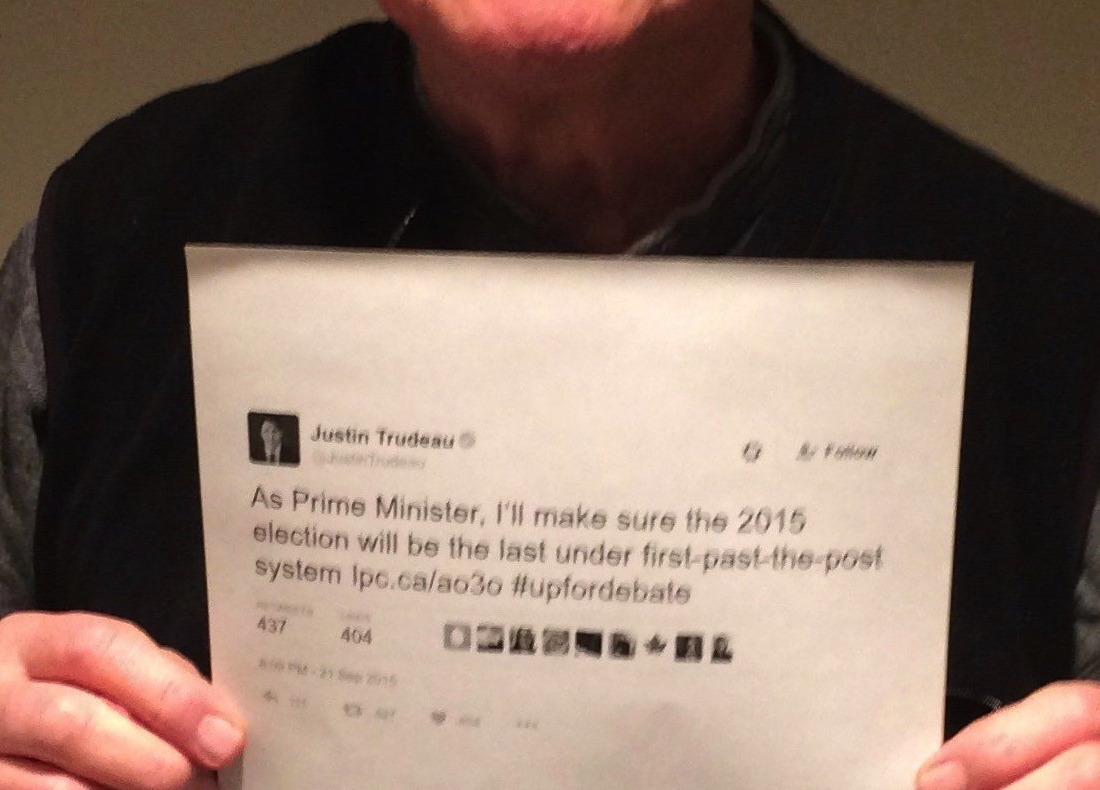 Unfortunately, following the tabling of the ERRE report, the Minister of Democratic Institutions responded, rather appallingly, that the Committee had taken “a pass” on the task assigned to them. She has since apologized and Elizabeth has accepted her apology.  However, it remains disappointing that the on-line survey  (MyDemocracy.ca) fails to build on the committee's work. Instead, it appears to ignore the work.

Despite these unfortunate missteps, Elizabeth believes the Minister and Prime Minister must be held to the promise in the Speech from the Throne – to make 2015 the last election under First Past the Post and to make every vote count. As the Committee’s report lays out in detail, there is a clear path toward reforming our electoral system by 2019.

If you are looking to further the cause of electoral reform, you are urged to get involved. Write a letter to the editor demanding the government keep its promise and write the Prime Minister and Minister of Democratic Institutions to let them know how you feel as well. Go to MyDemocracy.ca and fill out the survey, but let your opinion be known by following up with the Prime Minister and Minister Monsef telling them you want a proportional Parliament (a question unasked in their survey). Take part in education campaigns that discuss reform with neighbours and friends.

Elizabeth is going to keep fighting for a fair voting system, and hopes you will too.

What: A free webinar featuring Elizabeth May, M.P. and Leader of the Green Party of Canada, and Nathan Cullen, M.P. and NDP Critic for Democratic Reform

Join the Broadbent Institute for this special opportunity to learn more about the Canada-wide ERRE consultation, the evidence presented and the committee’s findings.

After a recommendation for a proportional system with local representation, Cullen and May will map out how the government can move forward before the next federal election and make good on its promise to make every vote count. 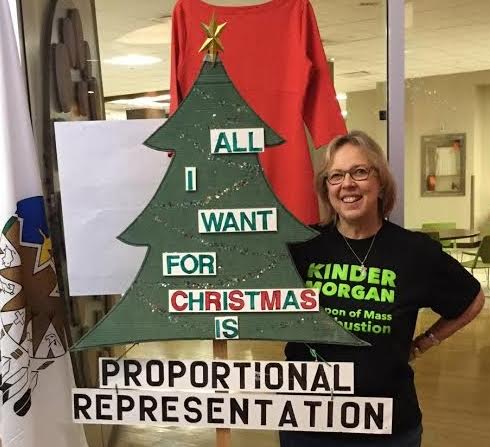 Then you can help elizabeth make her Christmas wish come true by filling out a 2-minute information-gathering survey and GPC will automatically send an email to Prime Minister Justin Trudeau & Minister Maryam Monsef. And if you are still wondering what to do with those mydemocracy.ca postcards? Follow the advice on "Operation Postcard" Tweet a picture of your postcard out on #operationpostcard and then send them postage free to:

On a lighter note you can get the latest low down on this and other hot stories on the Canadian Political Scene, watch the ‘Air Farce New Year’s Eve’ special when it returns on Dec. 30th. There will be appearances from Hockey Night in Canada’s Ron MacLean, political party leaders Tom Mulcair and Elizabeth May, and MPs Tony Clement and David Christopherson.

Kinder Morgan is of course also still front and center on our radar. In this opinion piece by Elizabeth in reply to a letter to the editor in the Peninsula News Review, she points out that: "The decision to approve KM was not based on science. It is all politics. It is all about the federal Liberals trying to help the Alberta NDP. The Alberta economy requires urgent help. But it must not be delivered at the cost of B.C.’s economy and environment. It is possible to help Alberta without sacrificing B.C" ~ Elizabeth May​ 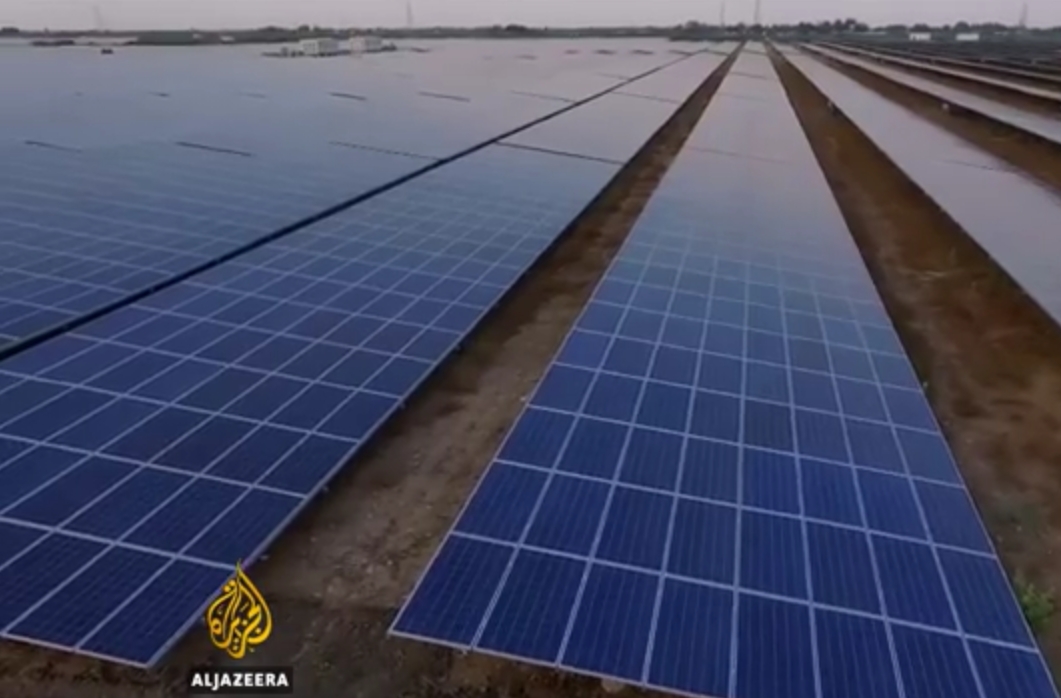 Here are two videos Elizabeth has asked us to promote. Combined with the latest news about Global Solar they make a pretty wonderful Christmas message by giving us a powerful one-two punch against Kinder Morgan and all Dilbit pipelines. Guess what Prime Minister, they are obsolete. One of the videos reminds us how critical it is that we do everything we can right now to curb climate change. The other shows us that it's going to get easier to fix the problem. I would recommend both as part of your holiday viewing pleasure.

If you want to help Greens globally, here is something you may not be aware of: #Greens2017 is the very first Joint Congress of the Global Greens and the European Green Party. It's taking place from the 30 March to 2 April in Liverpool, England. Nearly 90 Green parties from countries as different as Monglia, Uganda and Bolivia will be represented.  They are fundraising to support people from low income countries with travel and visa costs.  Here`s our tweet: https://twitter.com/SGIGreens/status/809840149936816129

Closer to home Elizabeth is participating in the #ChristmasBlessingsChallenge She was nominated by Lisa Helps, Mayor of Victoria, and is nominating Tess Van Straaten and Andrew Weaver. You too can participate. Click on the link to find out how.

Hope this last week of holiday preparation finds you in good health and spirit. Whether you celebrate the Winter Solstice, Hanukkah or Christmas, may you enjoy the peace and happiness of this special season.