A new way of doing politics

Elizabeth has often reminded us that our biggest challenge in the world today is that we are afraid to abandon our cynicism. Perhaps it's our fear of being labeled naive. Perhaps we are infected by the cynics that surround us. But in our hearts we know that we long for something better. We know this because when we see it, when we catch a glimpse of how things could and should be, we are touched deeply. So deeply in fact that it can move us to tears. That's what happened to me as I watched Arnold Chan address the House of commons this week. 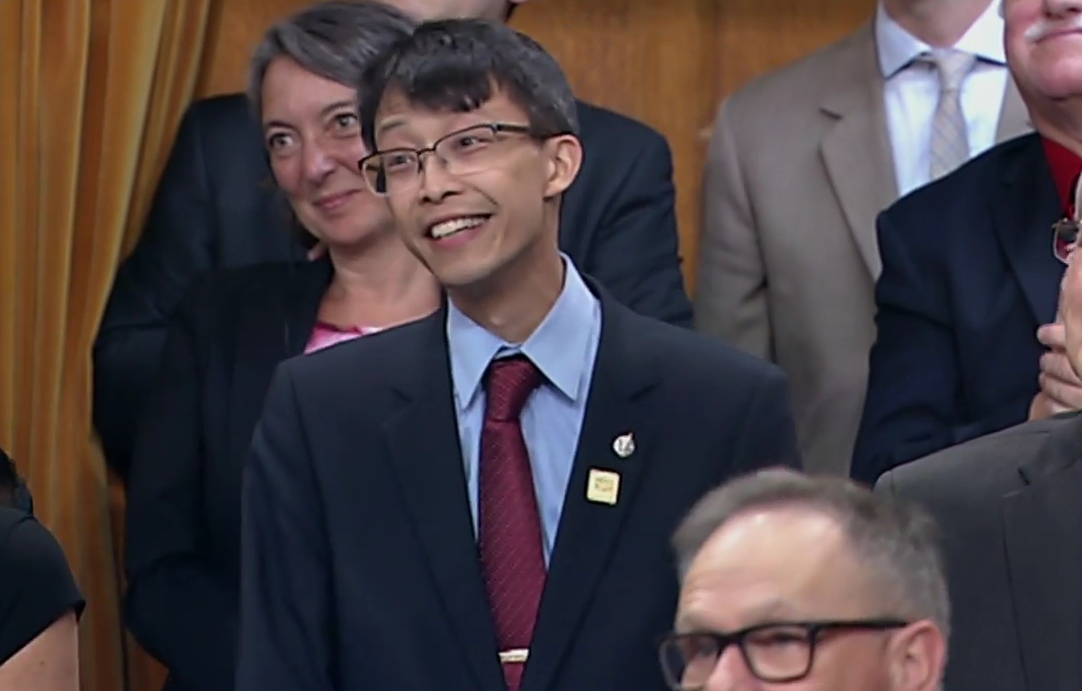 "I would beg us, to not only act as honourable members but to treat this institution honourably. And to that extent I want to make a shout out to our colleague from Saanich-Gulf Islands, a parliamentarian. Despite the fact that we are not in the same party, despite the fact that we may disagree on some substantive issues quite vehemently, I consider this particular member to be a giant. Not simply because she exhorts us to follow standing order 18, but more importantly I've observed in her practice, Mr. Speaker, that she reveres this place, she is dedicated to her constituents, she practices both here and in committee the highest standard that any parliamentarian could ask for. Despite perhaps strongly disagreeing with the position of the government of the day, she does so in a respectful tone and I would ask all of us to elevate our debate, to elevate our practice, to that standard. We Must!

"It is only through that practice, that I believe she so eloquently demonstrates, that Canadians will have confidence in this democratic institution that we all hold so dear." Arnold Chan's full speech and the responses it drew from all parties in the House, is well worth listening to. He goes on to call on his fellow members to "ditch the canned talking points" and listen to one another: "I think it's more important that we bring our experience, that we bring the experience of our constituents, here, and impose it on the question of the day, and to ask ourselves how do we get better legislation, how do we make better laws. We can disagree strongly. In fact we should. That is what democracy is about. But don't just talk to formalitic talking points. It doesn't elevate this place. It does not give Canadians confidence in what democracy truly, truly means.

"The other thing I would simple ask all my colleagues to consider, while we debate and engage, is to listen to one another despite our strong differences. That's when democracy really happens. That's the challenge going on around the world right now. No one is listening. Everyone is just talking at one another. We have to listen. And in so doing we make this place a stronger place." He goes on to eloquently articulate the foundation of common acts of civility and decency, that make us what we are, that make Canada great.

It is that vision of a more civil society, of political discourse that seeks to build our country up and not just tear each other down, that lies at the root of why Greens believe in democracy. Reaching across the political divide, not by capitulating to opposing ideologies but by respecting that the voices of disagreement bring valuable perspectives to a civil debate.

Most of us dare not dream. But when dream turns to reality we rejoice nonetheless. It is the example of those with the courage to dream that inspires us to create that new reality. And those examples are often found in the most unlikely places. Like in the most remote corner of the people's house. And when we rejoice together we realize that the outmoded paradigm of winner-take-all hyper-partisanship, with the singular objective of power, is losing favour with the people. 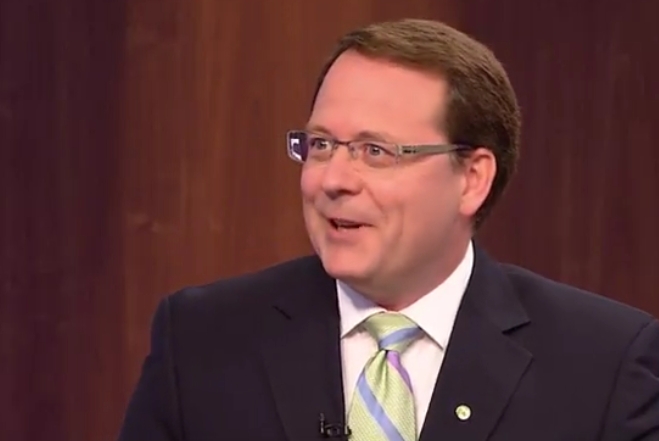 "What Andrew Weaver and the Greens in British Columbia have shown is that they can work cooperatively and collaboratively with any party, which I think is what Canadians want their politicians to do." The biggest takeaway for Mike Schreiner, the leader of the Green Party of Ontario is that voters are hungry "for a party that's basing its agenda on honesty, integrity and policies that put people first, ahead of their own partisan self interest." He explains that people are looking for a new way of doing politics. "People are tired of the lack of decorum, the partisanship, the political games, the spin. They want straight answers on the biggest challenges we face."

In New Brunswick David Coon, who initially proposed a bill last year to get big money out of politics, just two weeks ago celebrated that the governing Liberals held their "Last Supper," a $500 a plate fund raiser that marked the end of pay to play financing rules in that province. And in PEI Peter Bevan Baker continues to champion a Basic Livable Income (endorsed by Barack Obama and Elon Musk as a critical component of the new economy) by co-hosting one of the forums that brings together MLAs from all parties to discuss this critical and innovative issue. 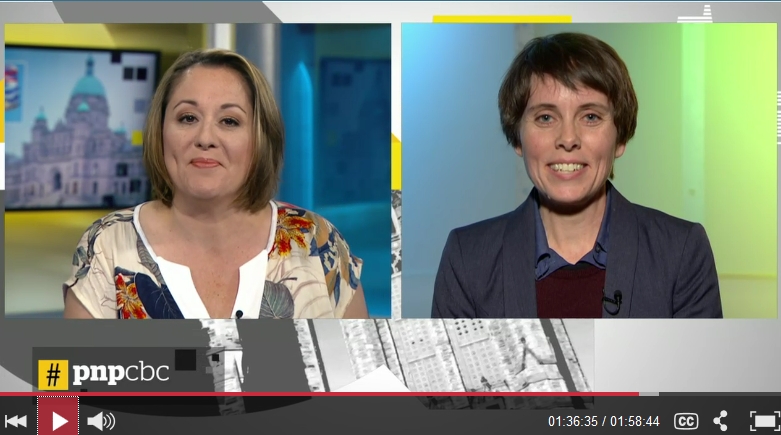 Back here in BC, even though Rosemary Barton clearly had a hard time wrapping her head around this new paradigm in politics, in this interview Sonia Furstenau (starts at 1:30:10) reminded her of the values that Greens exemplify. "The reality is, we have the most exciting political outcome in BC in over 50 years. We have a legislature that is far more representative of the will of the BC electorate than we’ve had in a very long time. We don’t have a false majority where literally 24% of eligible voters give 100% of the power to one party. And we have this opportunity to see a new era in politics where everybody can be working together and bringing forward good legislation.”

When Rosemary insisted on perpetuating the paradigm of divisive, winner-take-all politics by arguing that the Liberal strategy around the speaker issue is 'fair game', Sonia was quick to remind the viewers that this is exactly what's happening. "There are some games being played... but what the people of BC really want to see is a different kind of politics." Sonia makes it clear that wherever the speaker comes from, it's the job of all 87 MLAs to govern. She also suggests that the no confidence vote is based on the track record of Christy Clark, not last minute promises. But she is enthusiastic that if the Liberals now decide to change their tune and bring forward good policies for the people of British Columbia, the Greens will be happy to support those policies. 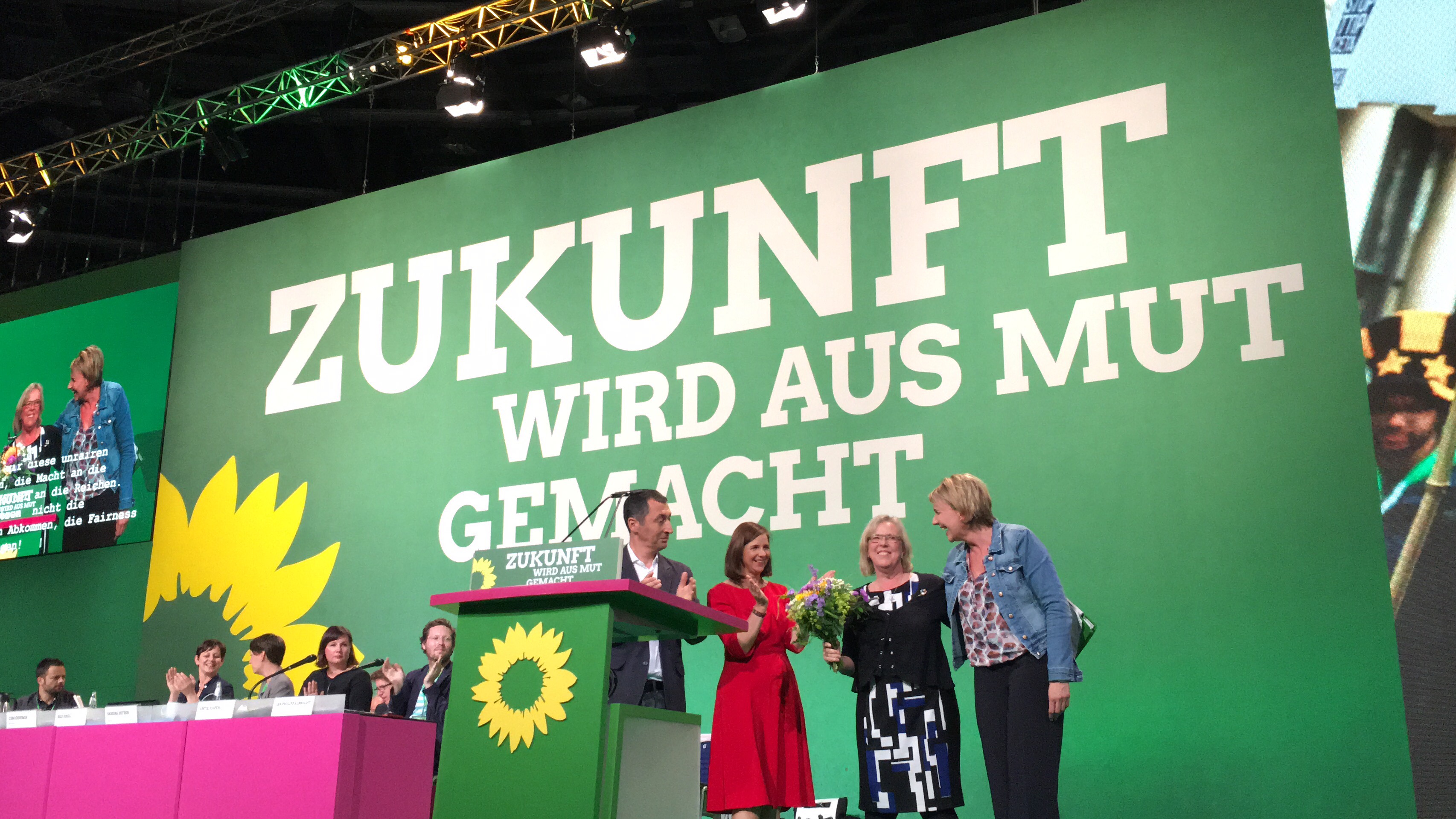 "Zukunft wird aus ­Mut gemacht." That's the theme of this year's BDK2017, the AGM of the German Greens in Berlin. Fittingly it roughly translates to: "The future is built on courage." It takes courage to break out of our old patterns and reach for excellence. True to form, Elizabeth addressed this gathering yesterday and received a warm welcome her keynote on CETA. No doubt she inspired her audience to embrace the future with trade agreements that actually serve the people, not the corporations.

And that is what the Aboriginal Day Paddle and Potluck for the Saanich Inlet this coming Wednesday is also about. Putting the needs of the people before the interests of large corporations. And doing it by building bridges with First Nations and embracing our shared values for responsible stewardship of this emerging place. We recognize that our family extends beyond the boundaries of our next of kin but includes the islands on which we stand and all the creatures who share our world with us. It includes those yet unborn who deserve to inherit a world that is at least as rich as the one we inherited from our parents.

Arnold Chan's words touched me so deeply because he asked our parliamentarians to move beyond the power paradigm. He asked them to embrace their differences and to accept their individual responsibility to respectfully, and with reverence for our democratic values, work together to address the challenges of our time. Perhaps he reminded us to expect nothing less of our representatives. Perhaps it's time for these words to be etched in marble as Elizabeth suggested.