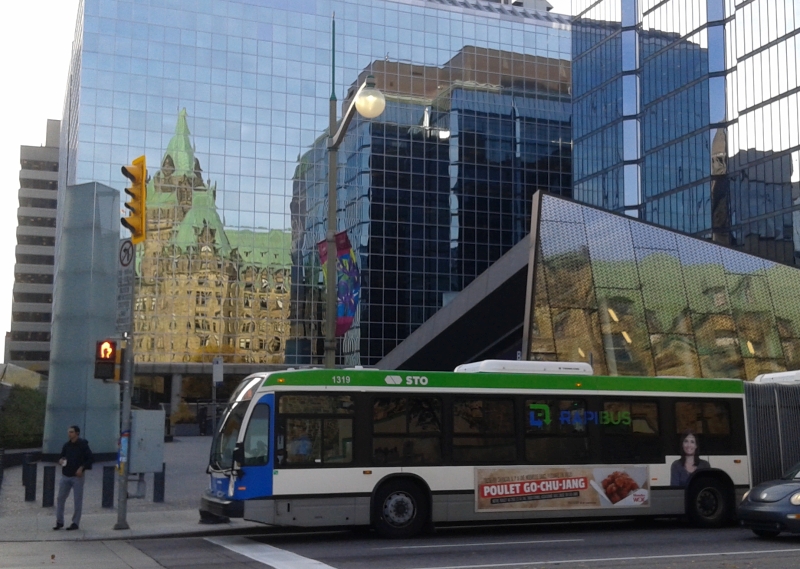 Trust, honour and credibility are the currency of exchange for parliamentarians. Wikipedia tells us that the term "Minister" comes from Middle English, deriving from the Old French word ministre, originally minister in Latin, meaning "servant, attendant." Even after decades of abuse by members of all three mainstream political parties, there is still a public expectation that our elected members in the House of Commons honour our trust and credibly demonstrate their dedication to serving the public at large.

Last week I was encouraged to attend the two day meeting of the Green Party of Canada's Federal Council, as a member/observer. These dedicated volunteers usually meet by video conference but twice a year they gather in person to attend to the business of the party. They are a Policy Governing Board under the Carver Model, setting the party's direction and objectives, and giving instruction to our Executive Director. The Council itself is elected by the membership and includes the co-chairs of our Young Greens. Our two Deputy Leaders and Executive Director serve as ex-officio members without voting privileges.

So I cashed in some points and reconnected with old friends who operate an AirBnB in Ottawa. As is often the case when one travels on points at the last minute, the flight schedules were grueling. I caught the red-eye going east and was booked on a 5:27am departure coming home. All day long on Friday folks were arriving from across Canada to start discussions that evening. Saturday's sessions started at 8:30 in the morning and continued past 9pm that night. Sunday's start was delayed just a little to accommodate church and ended early afternoon so people could make their way home. 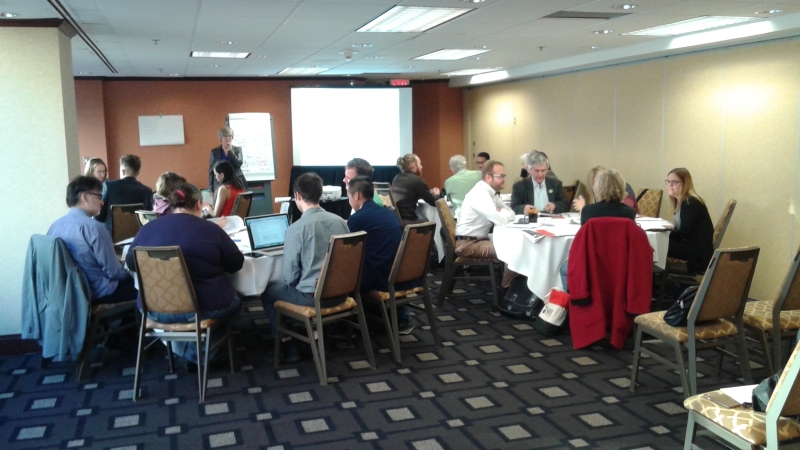 The debate was intense at times but always respectful. More than once I had the feeling that these people, while bringing a broad range of viewpoints to the table, are all dedicated to the vision of an inclusive, responsible, and fair democratic process. Most sessions were open to the membership and those that were in-camera offered me the time and opportunity to write last week's Good Sunday Morning while camped out in the lobby of the hotel. It also allowed me to connect with some of the other observers which helped to broaden my understanding even more.

On Monday I visited the national office of the Green Party of Canada on Albert Street. I was grateful for the opportunity to connect face to face with some of the new staff whom I had only met via video conferences and webinars. I was struck again by their sincere dedication to use our limited resources to maximum effectiveness in striving for excellence. We talked about providing a safe space for young greens to familiarize themselves with politics and the responsibility that the rest of us have, to reach out to them. We talked about showcasing the fabulous work that Elizabeth is doing as a Green MP and possibly engaging members to take pictures and videos of our favourite parliamentarian in action. We talked about what it means to be Green and the Vision that unites us all. 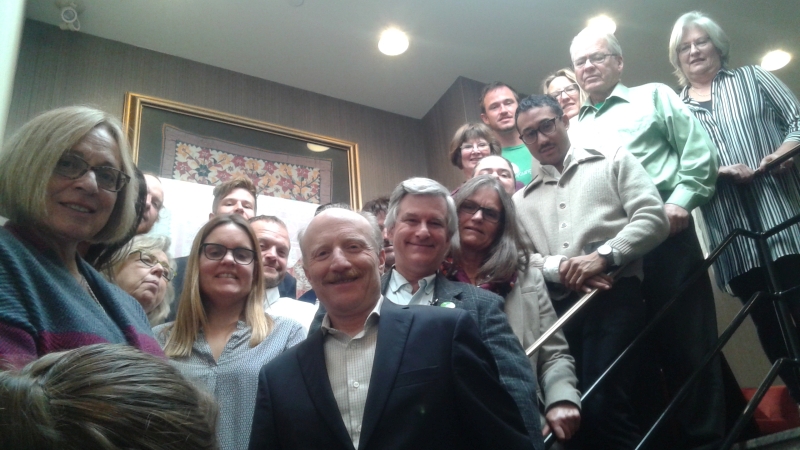 Throughout the weekend I found myself in conversations about the need to do politics differently. That there is value in looking beyond the singular objective of getting MPs elected, to offering people hope. Hope that a stronger Green voice in parliament will secure the future well being of our country and strengthen the role we play on the world stage. That it's not about power but about responsibility to future generations was re-enforced again and again. This commitment to strive for the highest level of integrity continues to inspire my dedication to this organization.

Under Elizabeth's leadership, our party offers an alternative to the bait and switch, morality by convenience approach offered by mainstream politics. There have been times when we have been tempted by the lure of "winning at all costs" but our culture of respect and integrity has always prevailed. And that culture is growing and strengthening as our party matures. More and more I see a commitment to earning the trust of Canadians by breaking the mold. By appealing to the higher angels of our democratic institutions and championing not what is, but what could be.

Halfway through Monday morning I received a text from Debra, Elizabeth's Chief of staff, asking if I would like to attend Question Period. QP is that infamous ruckus that attracts most MPs to the chamber for the opportunity to stand before the cameras. Unlike the rest of the parliamentary sessions when the House is often sparsely attended, Question Period promises lively political theatre. Last Monday was no exception. 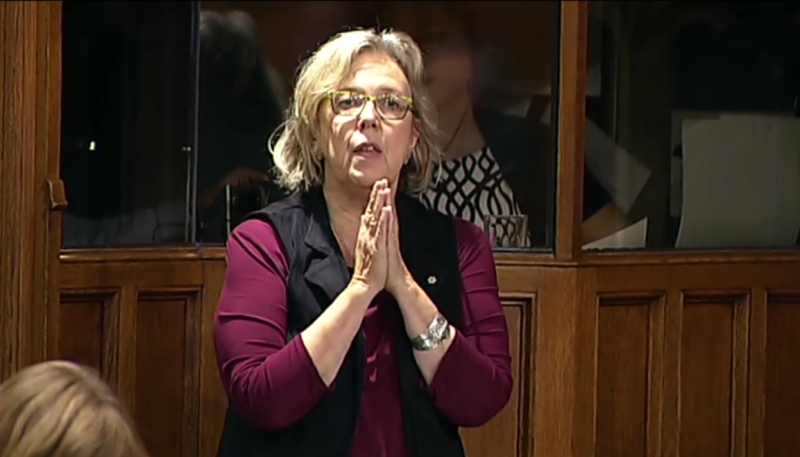 Much of the "debate" was scripted questions, carefully read from speaking notes, followed by carefully delivered "answers" that went out of their way to avoid actually addressing the question. This week it was of course all about Bill Morneau and his indiscretions. It reminded me of the plot in the novel 1984, where two of the three superpowers were always aligned against the third. Which two, changed periodically. And when it did the history books were re-written to make it appear that it had always been that way.

Yes it was a déjà vu moment, a throwback to the Harper years. Only this time the Conservatives and the NDP asked the pointed questions and the Liberals responded by carefully staying "on message" with their non-answers. Every time Minister Morneau opened his mouth he sunk deeper into the quagmire of mistrust and deception. The jeering and cat calling that caused Elizabeth to call out the opposition for "schoolyard bullying" only served to underscore the opportunistic nature of this charade.

Is it any wonder that a solid majority of Canadians are simply fed up, cynical to the point of disengagement, leaving the mainstream political parties to poach each other's ever shrinking base of support, in an us-against-them game of chicken. It will take more than short term opportunism to address the challenges of our time. It will take more than promises to earn the trust of Canadians, especially young Canadians, that their political institutions can serve their interests.

It will take a commitment to serving the public good, of reaching beyond self serving interests to a place where we put people before politics. It will take a dedication to unpacking the hard issues with forthright integrity and reaching across political divides for the best solutions. Although my trip to Ottawa took its toll on my sleep patterns, it was totally worth it; reaffirming my pride in the dedication that our Green family has to re-inventing politics. From the grassroots through EDAs and our Federal Council, up to our Federal Party Leader, we are determined to offer Canadians a sincere alternative to the status quo. "And that," said one proud conservative who voted Green in the last provincial election here in BC, "is something I can vote for."