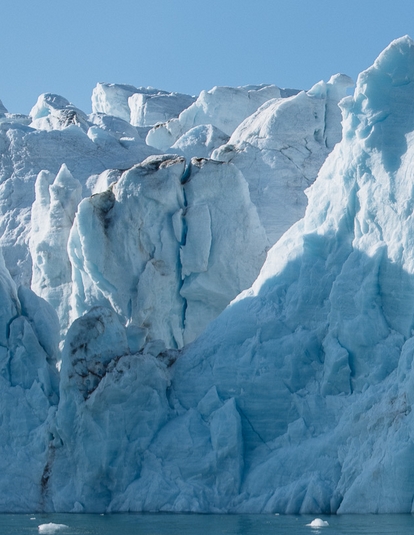 It's always been known that we Canadians huddle against our southern border like children around Santa Claus. There are many reasons for this, including our close economic ties with the United States and our weather. But so much of our country, in fact the vast majority of it, is totally unlike anything most Canadians experience or may ever experience. It's not called the Great White North for nothing. Its vastness is almost unimaginable.

In celebration of 150 years of confederation, Canada C3 has embarked on an epic 150-day sailing journey from Toronto to Victoria via the Northwest Passage. As the map indicates, the ship visited some of the remotest communities in Canada as it practically circumnavigates the entire country. It's a trip that has been made easier because arctic sea ice is vanishing far faster than anyone thought possible.

But the warming that is causing the sea ice to vanish is triggering a complex chain reaction that could have even more far reaching effects. Massive permafrost thaw documented again last winter, portends a huge carbon release triggering a feedback loop that could dramatically accelerate climate change to catastrophic proportions. As permafrost melts it starts to decompose, releasing its carbon stores in the form of methane. Methane, being a much more potent greenhouse gas than CO2 in the short term, intensifies the warming which melts more permafrost which releases more methane and so on.

Bob Berwyn wrote in Inside Climate News: "A series of studies on the National Institute of Health's Arctic Health website documents how the widespread thaw of permafrost is already having direct impacts on people. Warmer water and increased sediment loads are harming lake trout, an important source of food for native communities. Changes to the land surface are also disrupting caribou breeding and migration, and in some places, the disappearing permafrost has destroyed traditional food storage cellars, researchers have found."

"The great concern is the rapid rise, over the last three years, in methane levels in the atmosphere," states this piece in Phys.org. "Methane is a gas with 28 times the planet-heating power of carbon dioxide. Scientists estimate there may be as much as 5 trillion tonnes of it locked in permafrost and seabed deposits. There is mounting evidence that, as the planet warms due to human activity, these vast reserves of greenhouse gases are now starting to melt and vent naturally. The Earth's past history shows this could unleash runaway global warming, driving up planetary temperatures by as much as 9 or 10 degrees Celsius."

The piece quotes Julian Cribb, author of Surviving the 21st Century: "At such temperatures, some scientists consider there is a high risk the planet would become uninhabitable to humans and large animals. Runaway heating and nuclear war are the two most likely triggers for human extinction – and it is time everyone took them both a lot more seriously." The implications for global climate and weather, and for animals and people in the North, are enormous.

We have been told about this before. NASA keeps reporting that "Sea Ice Extent Sinks to Record Lows at Both Poles." David Suzuki, Andrew Weaver and Elizabeth May have been warning us about this for years. The science is clear and successive governments have been briefed. And yet the pattern repeats itself. Our path is set, our strategy negotiated, our decision made. Don't confuse us with the facts. The "Rachel needs a pipeline" narrative is so pervasive that even a letter sent to Trudeau on Nov. 21, 2016, that was based on an assessment of more than 9,000 pieces of scientific literature could not change their minds. This recent article in the National Observer is based on information that was released through the access to information act. It confirms that the "paper was authored by eight academics, peer-reviewed and published in a scientific journal, Frontiers in Ecology and the Environment."

“There are large unexamined risks to the marine environment from oil sands products,” the scientists wrote in their letter to Trudeau. The piece outlines how "The letter also told Trudeau that it would be “scientifically unfounded” to assume that damage from these products can be lessened. Yet, some government officials quickly labelled the paper “wrong” and “not true,” picking apart its conclusions about industry secrecy, the availability of scientific data and the impact of the oilsands on climate change."

There is plenty of evidence that the message is getting through to the Liberals that climate change is a most pressing issue. But where it conflicts with the established agenda it seems to matter little that the message is grounded in science. The promo page for the 150 day journey states that: "The Canada C3 journey is giving Canadians new perspectives, triggering unexpected connections and sparking fresh ideas on how to build a better Canada. As our ship travels from coast to coast to coast, more and more Canadians add their voices to Canada C3 through our events in coastal communities, cross-Canada Museum Hubs, interactive map, live video and more." I went through the web site and although this voyage reaches into the heart of a deeply affected region, there was little evidence that climate change was a serious focus.

Next Wednesday, October 25th at 10:30, Elizabeth will be welcoming the expedition when it arrives at the docks on Saturna Island. Joining the expedition for its final leg, Elizabeth will accompany it to Ganges on Thursday and into Brentwood Bay and the Todd Inlet on Friday, to an official welcome by Tsartlip First Nation Chief and Elders. Saturday will be the final port of call when the ship will dock on wharf Street in Victoria where Elizabeth will disembark. You can find out more about these and other expedition events by visiting the C3 Facebook page.

To keep in touch with other great events and activities, don't forget to check out the fabulous "Week In Review" that Elizabeth's Hill staff published again this week. And if you feel strongly about the need to act on climate change, next Saturday there is an opportunity to register your voice on the Kinder Morgan Pipeline Expansion. Construction has begun. It's time to join with First Nations and show that the science on this project has been ignored and the risks are not justified. Are we really prepared to sacrifice our Orcas for Rachel Notley?


It takes more than promises,
Thomas