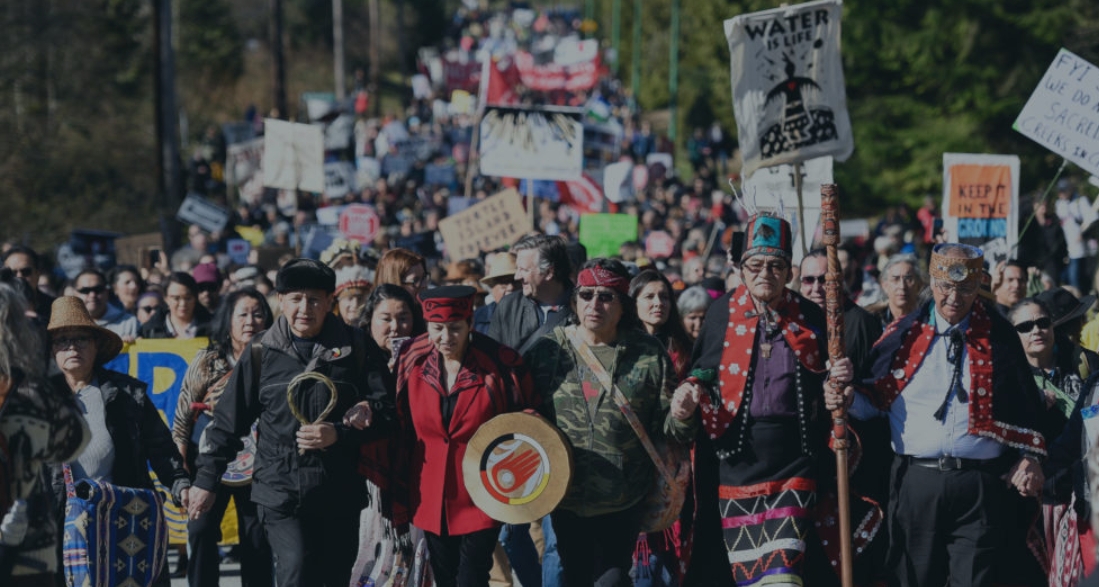 What an amazing day. The ceremonies and speeches were moving. They relayed personal stories of heartbreak and despair, resolve and success, determination and victory. But perhaps the most inspiring part was the sheer volume of people that showed up to take a stand. The crowd just kept on growing. Upwards of 10,000 people climbed Burnaby mountain today in solidarity with First Nations leaders who stand in firm opposition to the Kinder Morgan pipeline expansion.

If you followed us on Facebook you will have seen the crowds. Interestingly, the media reported thousands because they dared not estimate the full magnitude. They also covered the other side; the rally for Kinder Morgan pipelines. That "other big crowd," as one media outlet described it, numbered "at least 200." 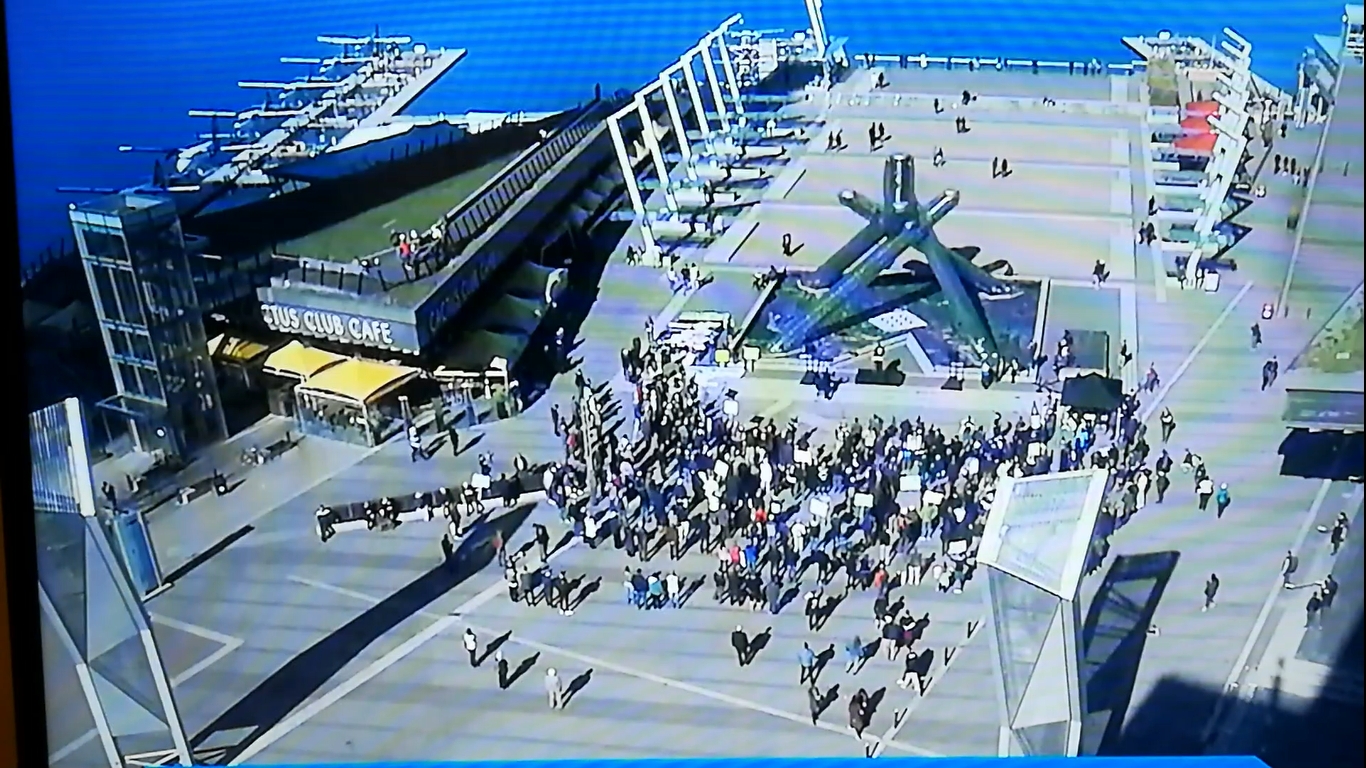 Besides conservative politicians from Alberta and BC, speakers included an oil-worker, who called himself “The Roughneck,” Vivian Krause, who investigates funding of environmental groups, and Stewart Muir, executive director of Resource Works Society. According to their website, Resource Works, Canada Action, Debunk, Generation Screwed, Rally for Resources, Northwest BC for Responsible Growth & Prosperity and other organizations brought together a diverse group of resource supporters for a Rally in Vancouver For Our Shared Future.

Truth be told there were probably more than 200 Albertans at the march today. Watching the media reports and having actually been there it was confirmed one more time how biased the main stream reporting is in favour of the oil industry and the ad revenue it generates for them. To headline this day's events as "two big rallies, for and against the Kinder Morgan expansion" is fake news at its finest. It's hard to believe we have sunk this low in Canada. 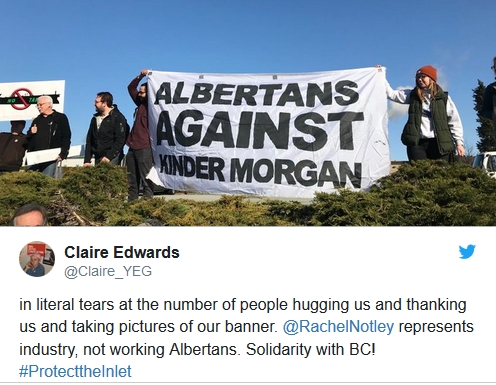 They dutifully deliver the spin. While Rachel Notley's threat to curtail oil shipments to BC is starting to come off as close to hysterical to some of us, it's reported to frighten the public. The line is that we are somehow to blame for Alberta not getting the price it deserves for it's dilbit and if we don't capitulate, Alberta will punch our lights out. Well, the Energy Mix published this analysis by Paul McKay last week that sets it into context.

It points out that a newly opened Louisiana Offshore Oil Port (LOOP) terminal was built to allow Very Large Crude Carriers (VLCCs) with a capacity of 2 millions barrels, to bring oil from the Persian Gulf, Nigeria, Russia, or Brazil. They can carry it to China, India, Indonesia, or Europe, at a shipping price lower than smaller tankers. And because the LOOP bi-directional pipeline can pump oil at a mind-bending 100,000 barrels per hour, supertankers can arrive with one load for refining and take off with another, by barely dropping anchor.

"These important changes in tanker and terminal technology and scale are no secret in the oil industry outside Canada. Nor is the dirty chemical composition of tar sands/oil sands bitumen. Nor is the cutthroat competition among global oil producers, refiners, shippers, and speculators, in which nickels per barrel of oil delivered are fought over fiercely. 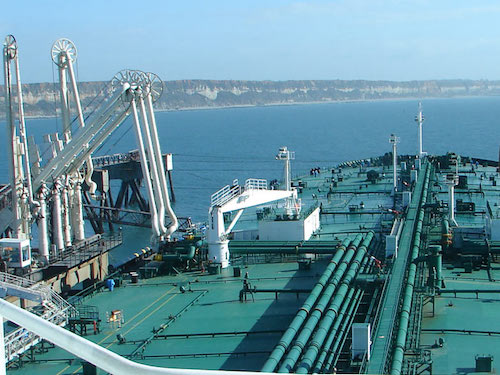 "In fact, the bad news for Alberta’s oilpatch has been building for a decade. That’s when shipbuilders in South Korea, China and Japan began constructing what has become a global fleet of about 750 VLCCs (with 50 more ordered for 2018), and the scrapping of Aframax class tankers began accelerating. This in turn drove down the benchmark price for ocean oil shipping, triggered the LOOP terminal upgrade, effectively consigned oil terminals like those in Burnaby, B.C. to minor league status, and left oil deposits far from deep port tidewater at a significant cost disadvantage. 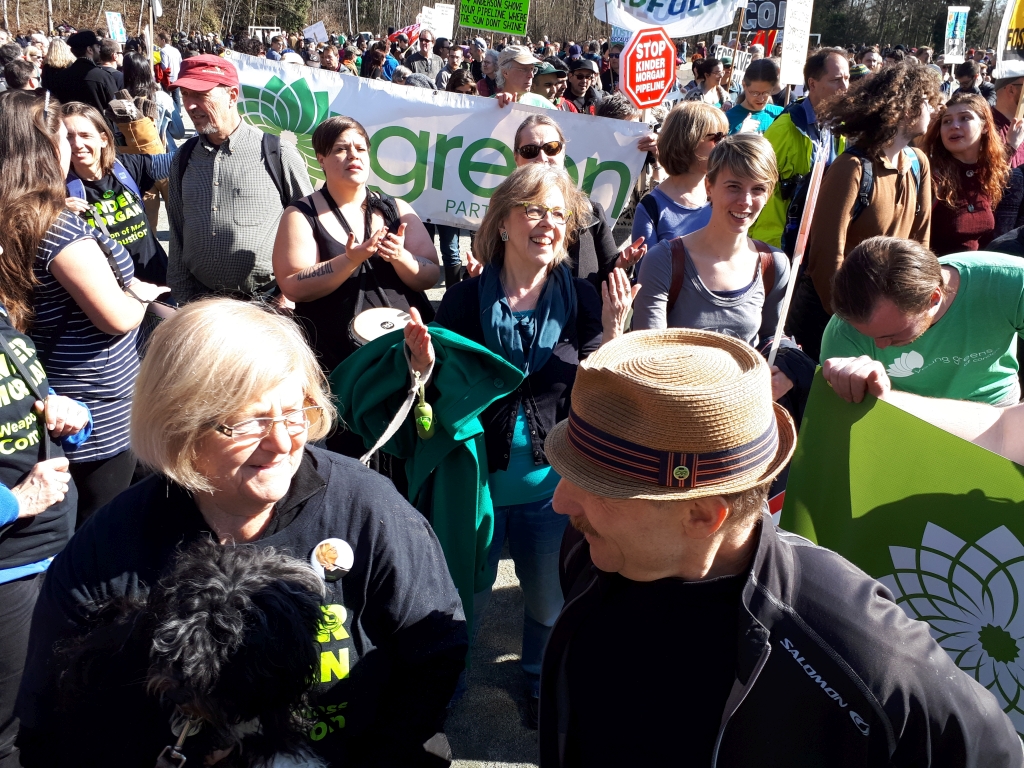 "No refiners will pay the same price to process sweet light crude and bitumen because they have to make costly capital outlays to configure their refineries to extract higher sulfur and heavy metals like copper and lead, make up the hydrogen deficit of bitumen, then dispose of the mountains of chemical crud left over. So refiners—anywhere on the planet—will charge Alberta producers more to process each barrel of bitumen.

"These facts are readily evident to those at the back end of the global oil supply chain. Alberta’s huge tar sands/oil sands deposits cost too much to dig up, refine, and ship. They are in the wrong place, far from tidewater. And they rank among the dirtiest to refine into gasoline, aviation fuel, or home heating oil.

"These are the reasons—hiding in plain sight—why Western Canada bitumen fetches the infamous “discount” price per barrel compared to oil supplies shipped from Texas and the North Sea. The LOOP terminal for VLCCs will magnify that spread, and no mythical Asian refiner, trader, or nation is likely to purchase for long a dirtier product that costs more and arrives on slower, smaller boats."

It's that global reality, combined with the looming technological convergence that we've written about that has Notley and Trudeau panicked. As the demand for oil plummets due to the success of alternatives and the autonomous electric vehicle fleets, no one will want Canada's dirty oil anymore. Sadly, instead of embracing the future they are desperately clinging to the past. 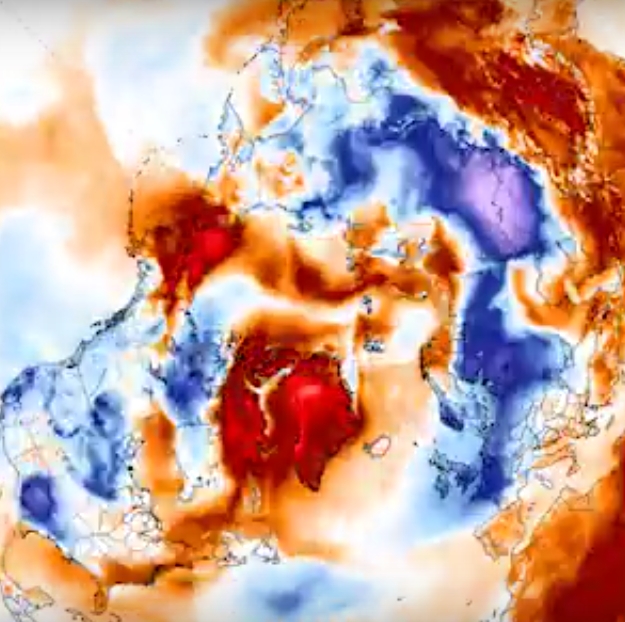 And they are doing that, even though everyone recognizes that in order to come anywhere close to meeting our Paris targets we have to develop a whole new approach to energy in this country. Science tells us that it is a climate emergency. As we reported last week, the polar vortex is collapsing and the consequences are unimaginable.

That's all for now but next week I'm planning to bring you a bunch of good news stories from around the globe.