Self respect is what we earn when we do the right thing, even though we could have done anything. 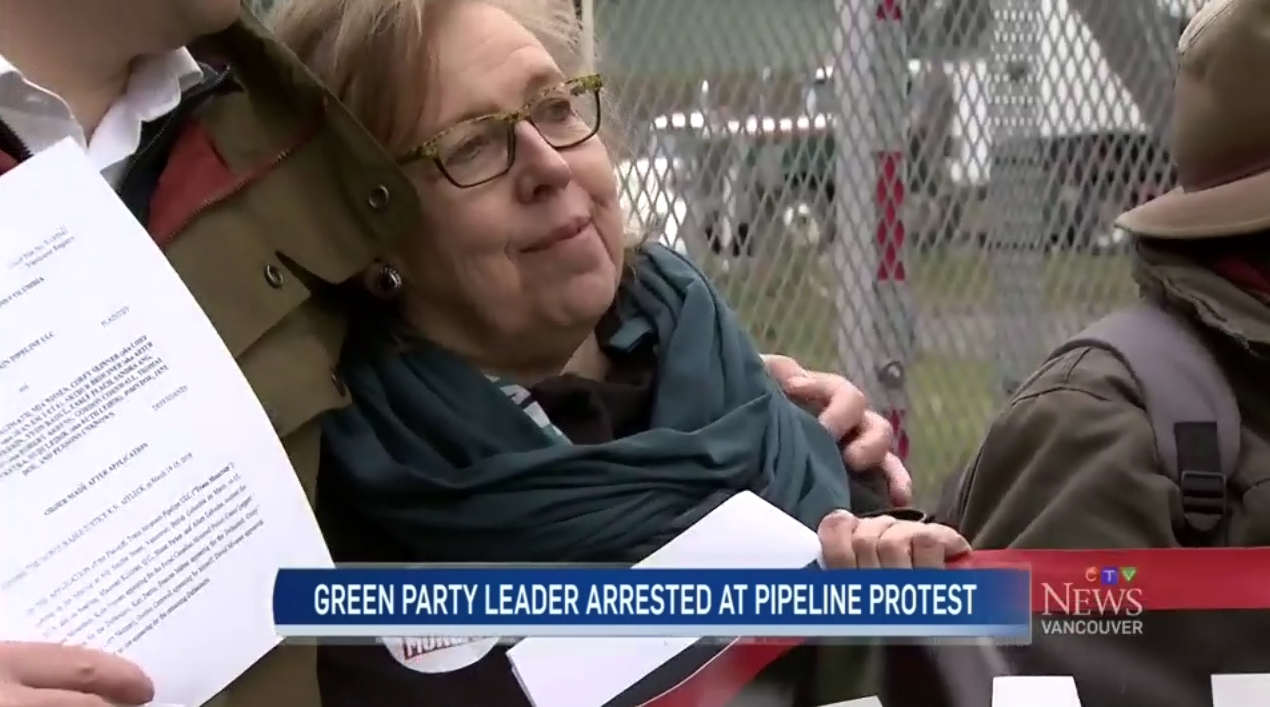 What a week it's been. Where do I start? How about with something quintessentially Elizabeth.

“I feel in my heart that I’ve done the right thing,” she told reporters. “I’m just doing my duty in reconciliation [to Indigenous communities] and in climate action and on behalf of the constituents of Saanich-Gulf Islands who are vehemently against seeing our Salish Sea have seven times more tankers loaded with bitumen. This is a project that does not have the permission of British Columbians.”

RCMP officers asked Elizabeth, Kennedy Stewart and other protesters (including Tom, Marcelle and Alexis, volunteers from our own Electoral District Association) to step away from the gates. When they refused, Mounties told them they were under arrest. Elizabeth locked arms and chatted with the officers as she was led into a tent set up by RCMP as a processing centre. 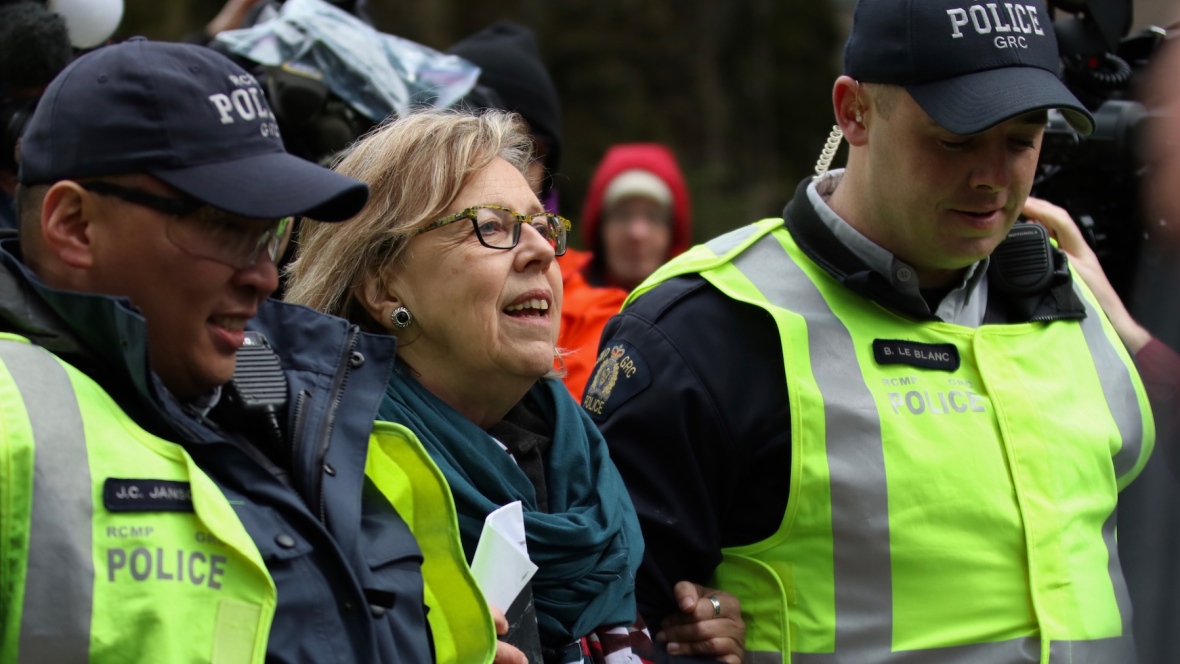 “It was a very gentle and kind arrest,” she said, hugging the two arresting officers before she left about half an hour later. She then appeared on Power Play and other news broadcasts to explain that she was charged with civil contempt for blocking a road, which is not a criminal charge. She said she must appear in court on June 14 and was released on condition that she not return to violate the injunction. "I'm a lawyer, I have deep respect for our courts, I have deep respect for the rule of the law."

“I feel very strongly that it was important as MPs to stand and say: ‘This is our responsibility, and the federal government has made a very large mistake in betraying their commitment and promises.’ When you’re fully conscious of your role in leadership, I really don’t think you have much choice other than to engage in non-violent civil disobedience if that’s the course of standing up against a wrong-headed, climate-disastrous project that violates Indigenous rights.” 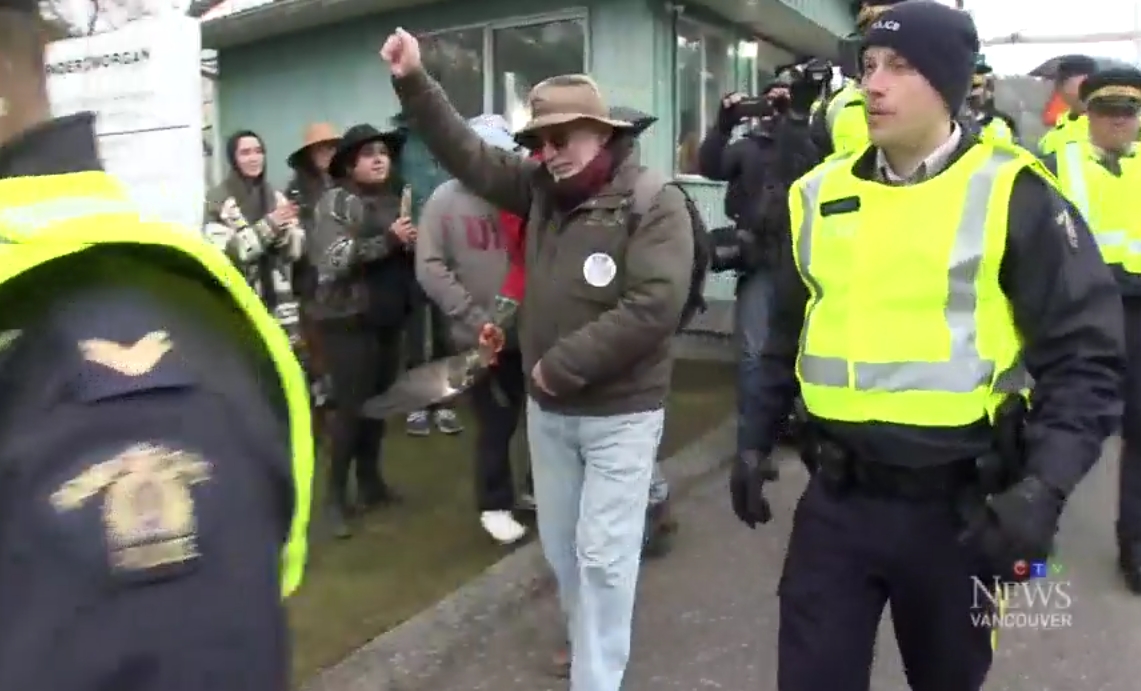 While Elizabeth and so many other supporters of this action were standing in the sleet on Burnaby Mountain, some of us were busy sharing the events on social media as they were unfolding. All day I received a continuous stream of calls, emails and even a few spontaneous donations, in support of Elizabeth and her public stand.

Scanning the various news reports on Friday I came across this article on the price of Gas and how it's all tied to the fact that we desperately need this pipeline expansion. What struck me again was how blatantly the facts are misrepresented and how the public narrative is charged with that misrepresentation. Written by a former Ontario MP turned petroleum analyst, it claims that “A twinned pipeline is the only viable option — and it could drop local gas prices dramatically.”

But Economist Robyn Allan explains the math behind what really happens after the pipeline expansion is completed. "Right now, it costs about $2.50 a barrel to get gasoline to the Lower Mainland market and after the expansion, to help pay for the expansion that doesn't serve our market, it will go up to about $5.90 a barrel. That equates to about two cents per litre increase at the pumps. I've calculated that about $100 million a year will be siphoned away from our economy." 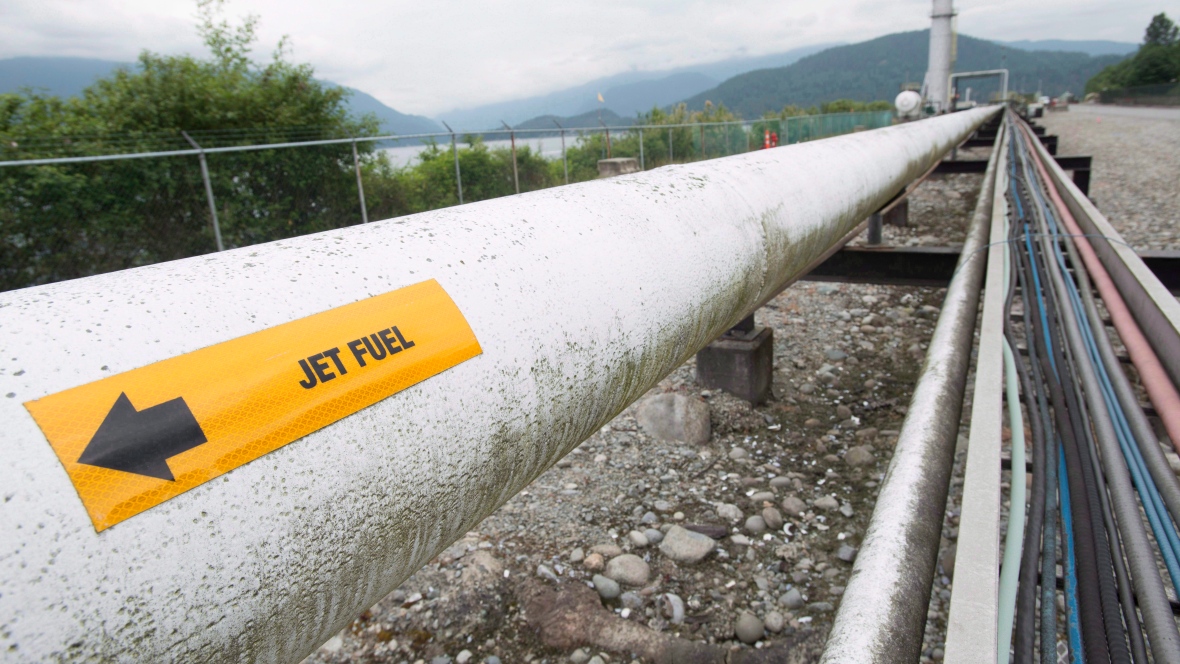 Allan points out that the intention of the expansion is not to increase refined product shipments for jet fuel or gasoline but to ship dilbit for export. Still many news stories persistently suggest that the Burnaby refinery (which by the way is one of those many Canadian oil assets that the multinationals - Chevron, ConocoPhillips, Shell, Statoil - have already sold off while the selling is good) will be able to increase its capacity and therefore lower gas prices if we twin Trans Mountain.

Before swallowing that, consider this:

The fact that the pipeline can move a variety of products allows the mix to shift from month to month to maximize profits. Any shortage in supply to BC can be easily made up by simply changing the mix. Robyn Allan is absolutely right. The gas hikes are part of a strategy to maximize profits. But they also build fear and villainize the people standing up for our right to protect our coast. 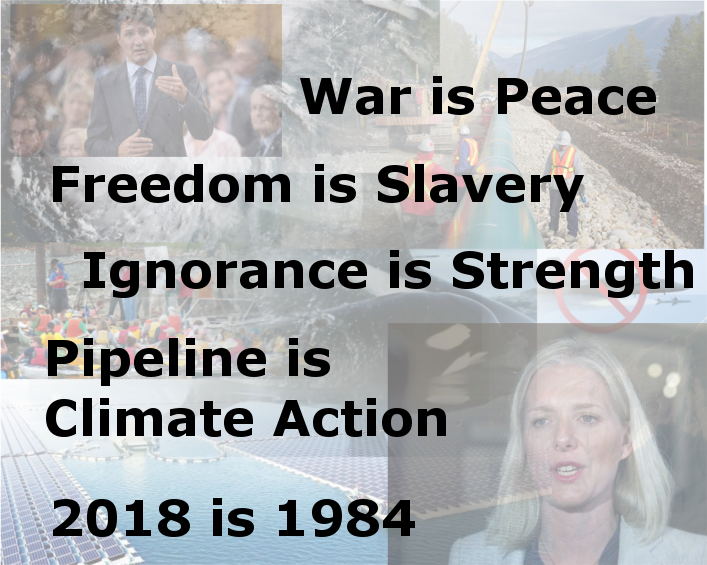 The reason all this matters, is that we are constantly fed a stream of doublespeak around this issue. Environment Minister Catherine McKenna said again last Monday that the pipeline fight puts the national climate plan in peril. No pipeline no climate action. And while offering $500 million in incentives for new ideas on how to curb climate change (how about phasing out the tar sands responsibly?) they are offering $1.5 billion in what amounts to a subsidy to big oil so they can sell the pipeline expansion to the public. Ever hear of a "world class spill response" for solar or wind?

Trudeau's credibility continues to slide and, loyal to a fault, Catherine McKenna is following him down the rabbit hole. Rachel Notley is still clamoring to increase CO2 production from 70 to 100 megatonnes and now John Horgan has declared that he too will try to outdo his predecessor by not only supporting but incentivizing fracked LNG in British Columbia with tax breaks. If these incentives cause the project in Kitimat to proceed, it will make living up to the confidence and supply agreement with the BC Greens close to impossible.

Although some members of the press are confused by the complexity of the issue, Andrew Weaver laid it out pretty well in his press release. "The BC Government still has not identified any concrete measures to reduce greenhouse gas emissions... It makes no sense to continue the generational sellout and further extend the government handout to a hypothetical LNG industry..." Adam also addresses the issue in his weekly Public Circle Live on Facebook. 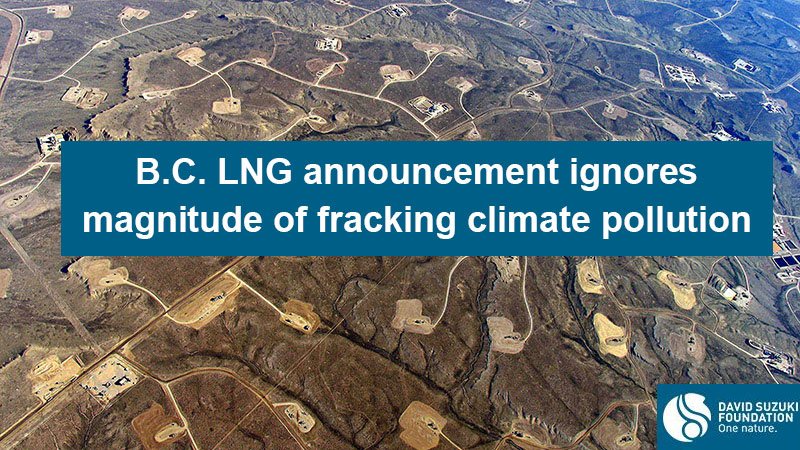 The sad reality is that none of the three mainstream parties can be trusted to put the considerations for future generations ahead of their political aim of achieving power. John Horgan is riding high in the polls and is now using Trudeau's line with LNG: "The previous government could not develop the industry but we can." When a party campaigns on one set of principles and then governs on another, it makes it very hard. Especially for those who signed an agreement based on "Good faith and no surprises."

And in the middle of this betrayal, the world is coming to grips with the nomination of our very own Trump Junior as leader of the Ontario Conservative party. With the provincial election in June and Mike Schreiner on a province wide campaign swing, an Op/Ed in the New York Times explains why interest in the Ontario Greens has exploded in the last couple of weeks. Mike represents all that Doug Ford is not. Still with the latest poll showing Ford in the lead, one has to wonder if our political landscape is more polluted than the Alberta's tar sands.

Thankfully there are still a few politicians who stand up for what they believe in. It will be complex for our BC Green caucus to navigate a situation where both major parties are dancing with the dinosaurs. But we know their values are rooted in inter-generational equity and fairness. So are those of Mike Schreiner, David Coon and Peter Bevan-Baker, who by the way continues to be the most favorite leader to be the premier in PEI. And so are municipal politicians, Kennedy Stewart, the MP from Burnaby and Jay Inslee. The Washington Governor hopes BC’s attempt to stop Kinder Morgan is successful: ‘You need to skate to where the puck is going to be... clean tech.’ 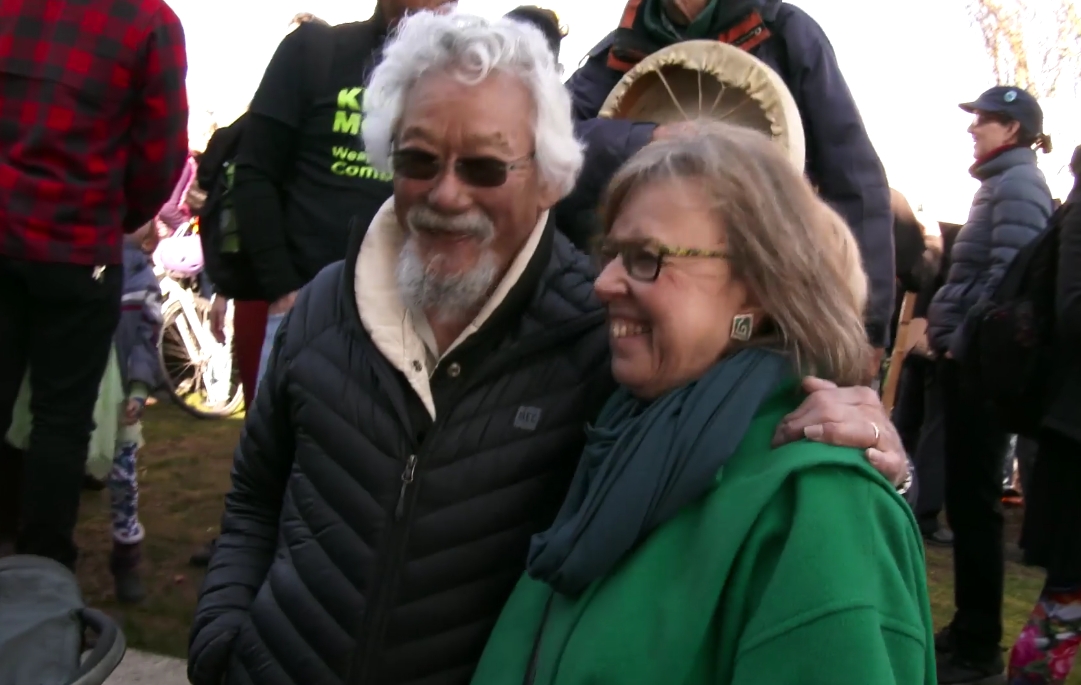 There are a lot of people dedicated to standing up for what is right. This fantastic video captures the thousands that stood with First Nations on March 10th. And now hundreds remain vigilant, taking a stand in front of the gates to the Kinder Morgan site in Burnaby. Every day 20 or more people are arrested in a steady stream that continues in the proud tradition of non violent civil disobedience. It comes from a spirit that knows the difference between right and wrong. A spirit that respects the law but also knows that throughout history, there are times when we must unite as a people and exert ourselves.

This is what Elizabeth said to the crowd just before she was arrested on Friday: "I'm a grandmother! And anyone who'sf looking at what's happening in the climate crisis on this planet, who doesn't recognize it's an emergency, is sleepwalking towards the precipice." Thank you Elizabeth. We are honoured that you lead us with such courage and conviction.

Take good care of each other,
Thomas