A new way of doing politics 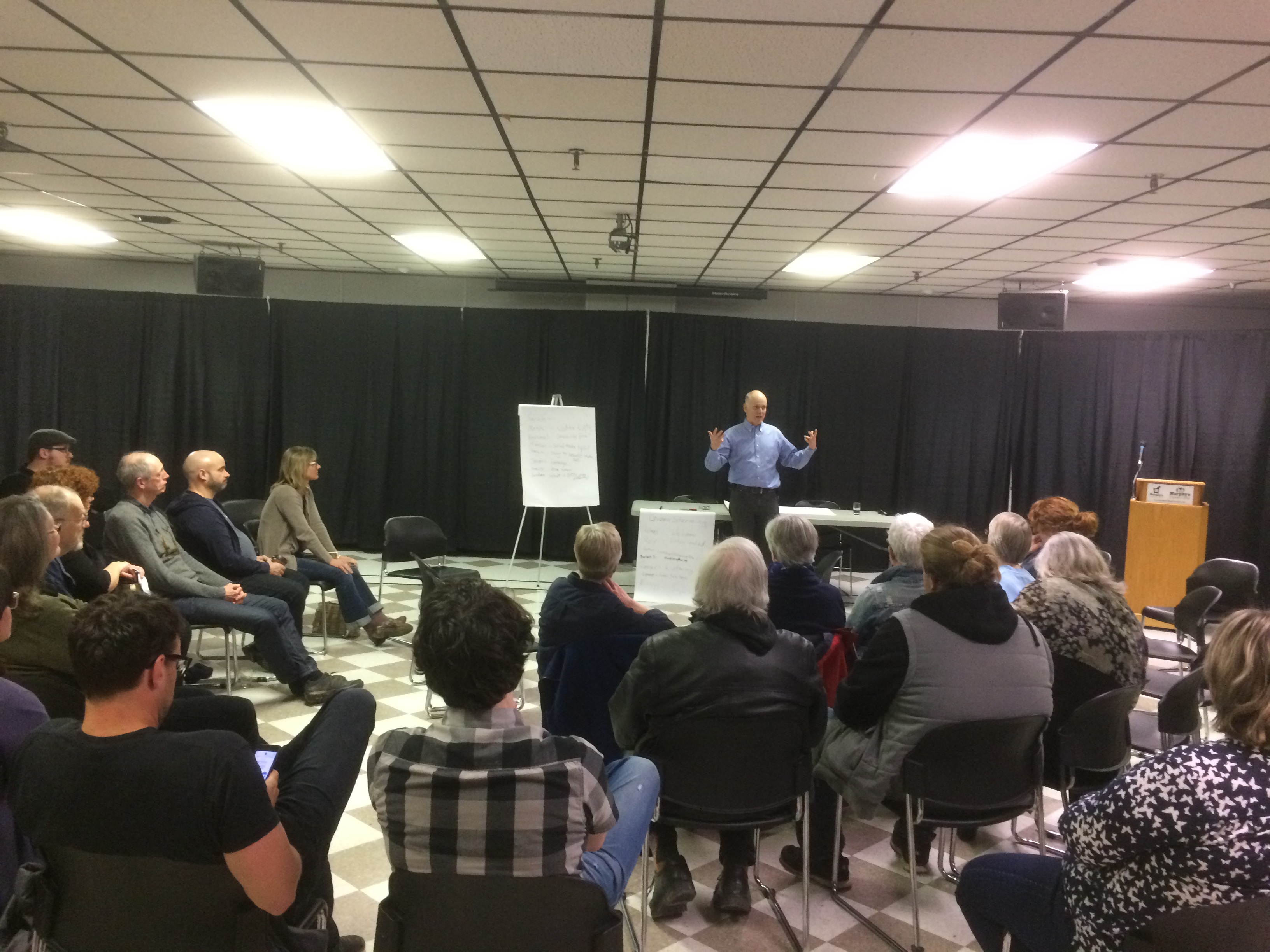 Shortly after clicking send on last Sunday's blog, I had the pleasure to facilitate a very special workshop with Greens in Fredericton. It resulted in one of the longest GreenStorming session I have ever had the pleasure of leading. We crystallized some powerful principles of community engagement and citizen participation. I was also invited to a discussion the next day in Nova Scotia and to lead another workshop on Tuesday in PEI. My little tour was made possible by volunteer contributions of air travel points from members of EDA 2.0. An ad-hock assemblage of Green EDA (Electoral District Association) leaders from across Canada, these folks are committed to a Green movement that champions integrity in politics and effective citizen engagement to build a better world for all.

Whenever I have an opportunity like this, to personally interact with Greens in other parts of the country, I am inspired by the common dedication we all have to reach beyond the partisan divides and embrace our common future with gusto. We recognize the urgency of our time and know that community engagement is the key to addressing the challenges we face in a fair and sustainable way. 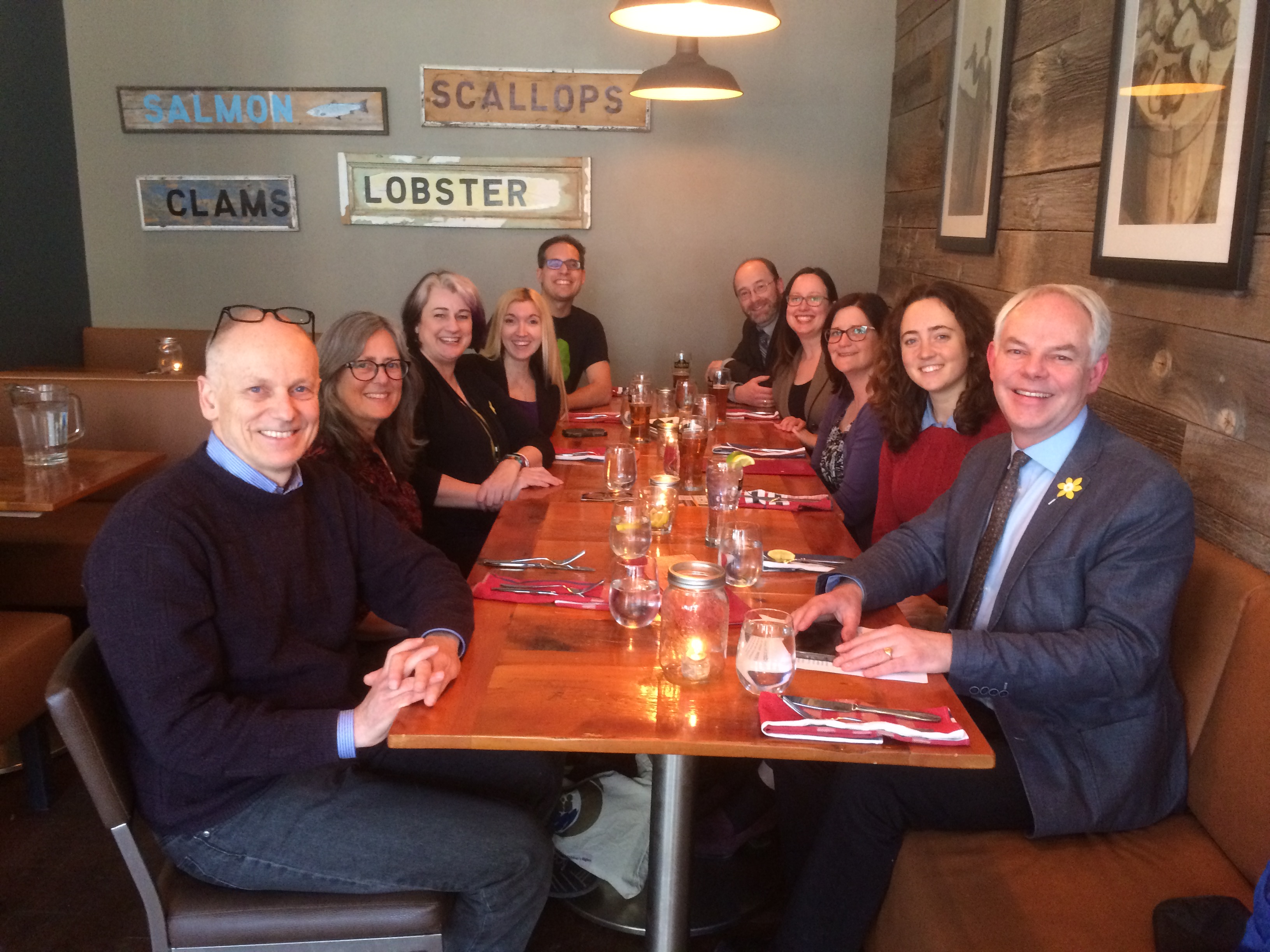 The great thing about the Green movement is that in addition to helping build awareness around issues, we have the opportunity to affect change in government by electing representatives that are willing to work hard for their constituents. "Our Home, Our Future!" is a common refrain that reflects a sense of responsibility to strive for inter-generational equity so that we leave a viable future for our children. David Coon, Peter Bevan-Baker and Hannah Bell have demonstrated how effective their voices are in changing public discourse. They exemplify a new way of doing politics in the Maritimes.

Like bookends of Canada we have three Greens in the provincial legislatures on both the East and West coast. And in June there is an opportunity to add Mike Schreiner to that lineup when the citizens of Guelph elect him as their voice in Ontario. Mike has been championing fairness and prudent, responsible governance as leader of the Ontario Greens. Dropping in to his campaign and accompanying him on a typically packed day of door knocking, radio interviews, community events and panel discussions, has been hugely inspiring. 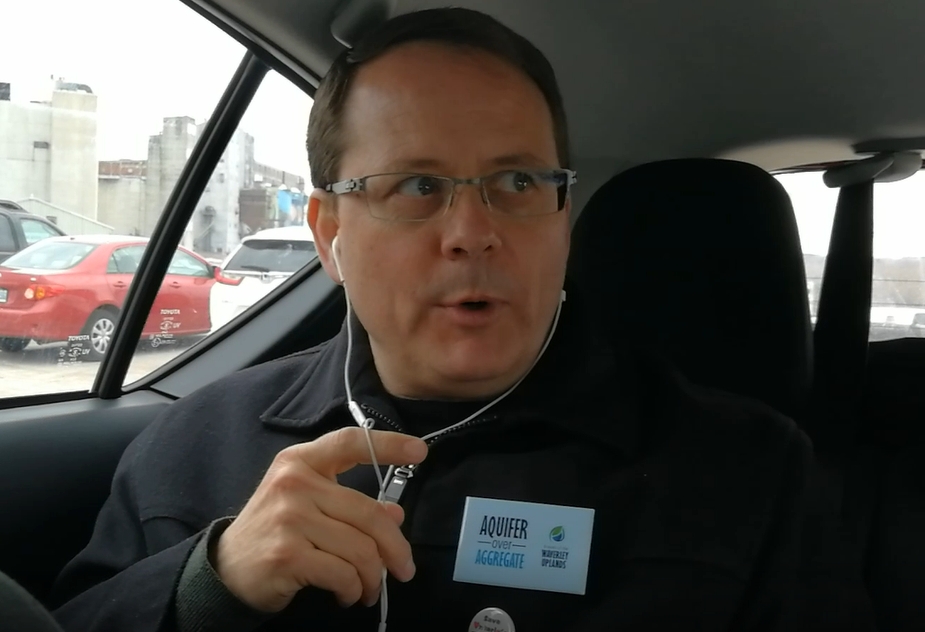 Mike has an incredible team that is pulling out all the stops to challenge the false narrative that we are stuck with mainstream political parties and somehow need to tease change out of entrenched power politics. Not only do the Ontario Greens have a fabulous vision for the future of that province but they know that in a changing world, we will need to reach across partisan divides to forge the best solutions for our time. It was a thrill to canvass with Mike and see first hand how he reaches the hearts of voters in Guelph. Mike's riding is as big as Saanich-Gulf Islands and if you are thinking of helping his campaign in the next six weeks, you can sign up here.

Now that the premier of PEI has decided not to call a spring election, Ontario is first to go to the polls on June 7th. PEI will likely be next and then New Brunswick in September. All represent great opportunities to build the Green Wave and give Canadians more authentic representation in government. And with the pipeline battle heating up, it's clear that integrity in politics is needed now more than ever.

Last weekend Kinder Morgan issued an ultimatum. It announced that it was suspending all “non-essential” spending on the Trans Mountain pipeline expansion and not investing any more funds in the project unless it can get agreement from the province of British Columbia to stand aside by the end of May. Premier Notley responded by committing to buying the Kinder Morgan pipeline and threatening Premier Horgan.

Trudeau for his part released a video on his Facebook page that drew the headline: "Trudeau defends approving Kinder Morgan in new video." In fact, if you watch the video neither Dilbit nor Kinder Morgan are ever mentioned. The people interviewed talk about increasing the safety of shipping traffic that now exists, totally sidestepping the issues raised by British Columbians. Trudeau added to the showmanship by interrupting his international tour to "summon" the two premiers to Ottawa for private talks today. 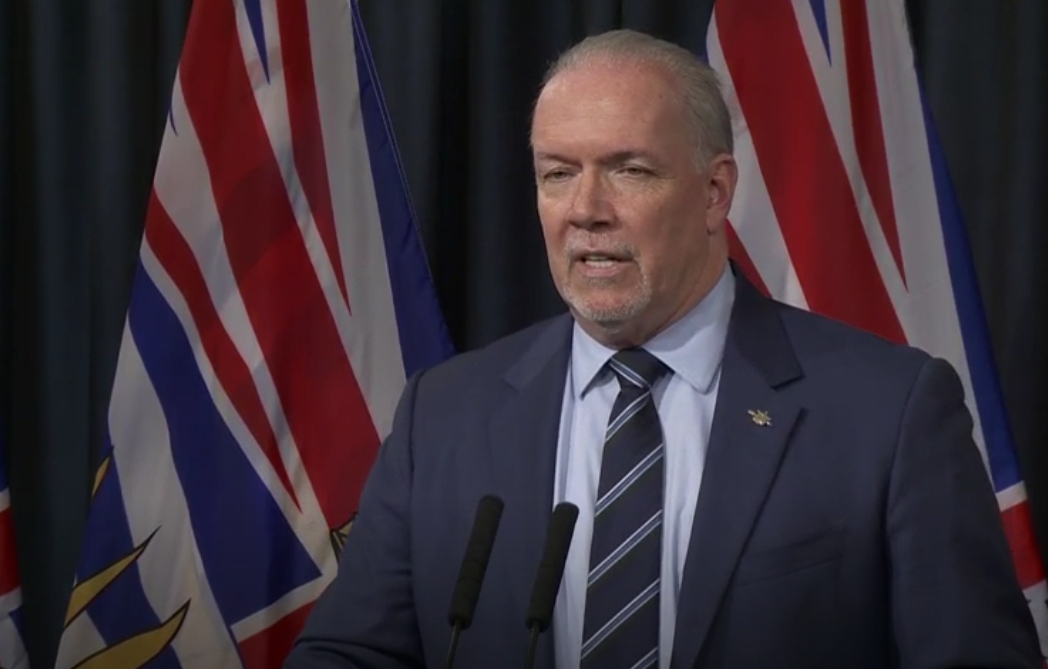 Meanwhile, John Horgan is the only voice in that meeting who will actually stand up for Canada's interests by echoing an argument that Elizabeth has been making for years; to build more refineries so oil sands bitumen can be turned into fuel and used at home, rather than diluted and shipped overseas. "If they have disposable billions, I would suggest a better course of action would be to invest in refining capacity so that we Canadians can benefit from the jobs and we Canadians can benefit from this natural resource rather than sending it in raw form to another jurisdiction," Horgan told reporters Thursday.

While John may be the only rational voice in that meeting other voices are starting to wake up to the threat that this kind of bullying poses to our democratic sensibilities. Quebec, has just sounded the alarm on the implications of the "national interest" argument being used to ram federal agendas through over the objections of provinces. It's easy to imagine how other provinces will follow suit.

In response to the CEO of Kinder Morgan Canada blaming BC's NDP government for being openly in opposition, Andrew Nikiforuk asked the tough questions: "Aren’t democracies supposed to challenge projects that impose unprecedented economic and environment risks on their citizens? Wouldn’t a tanker spill of diluted bitumen in the Salish Sea, where one-third of western Canada’s population lives, be an economic and environmental catastrophe, devastating tourism, property values and marine life?

"Wouldn’t the doubling of tolls on the expanded pipeline, as approved by the National Energy Board, raise gas prices for British Columbian motorists by $100 million a year? The pipeline now supplies southern B.C. with most of its petroleum. Won’t Alberta, by exporting diluted bitumen to Asian refineries, repeat the original Canadian sin of failing to add value to resources at home, giving up thousands of jobs and billions in revenue? 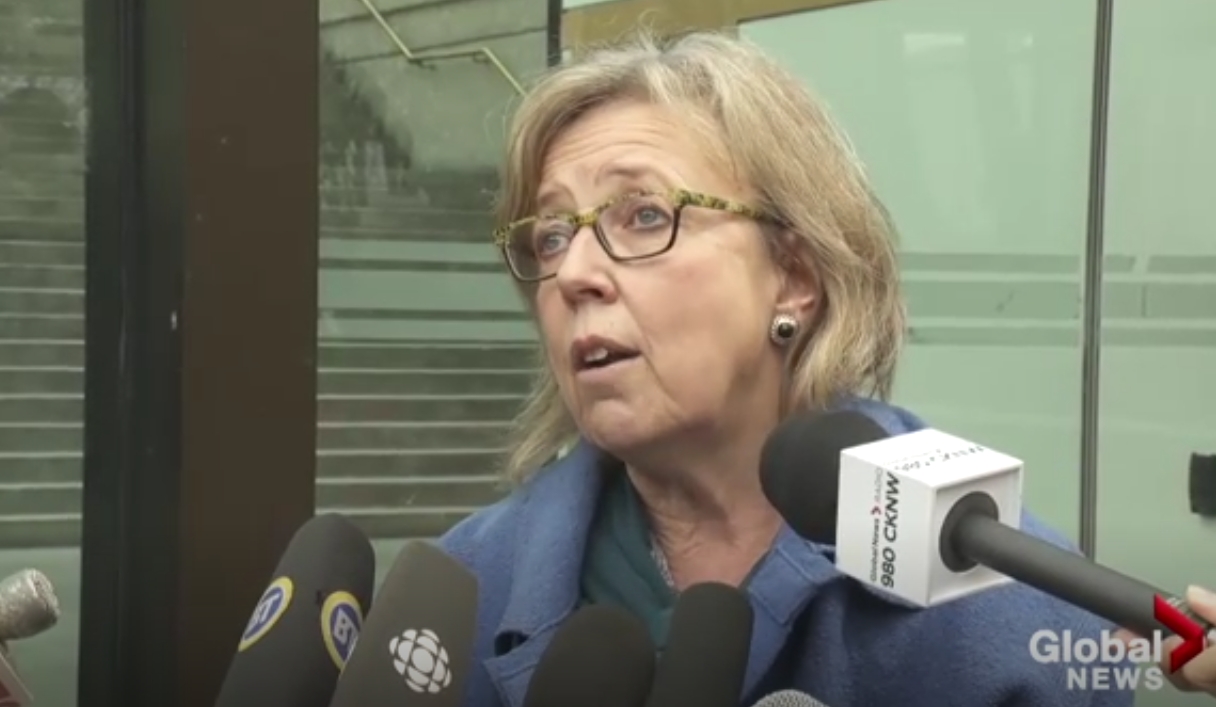 "How can exporting one of the world’s most carbon intensive fuels help fight climate change? And can’t corporations with viable projects accommodate citizens, courts, First Nations and economists who think such costs and liabilities should be properly accounted for? But Kinder Morgan prefers bluster and blackmail instead of the reality that the project was never a sound venture because it was about privatizing gains and socializing costs.

"Economist Robyn Allan has repeatedly argued that Kinder Morgan is no ordinary company and the Trans Mountain expansion project has been uneconomic since day one. She told The Tyee that Kinder Morgan is looking for an exit strategy, but it likely includes a need to demonize Ottawa in order to set the stage for a suit under NAFTA.”

As Martyn Brown points out in this commentary, "It [Trudeau's Kinder Morgan debacle] is an ugly scar on the face of our nation; one that threatens to forever mark Canada as a climate outlaw and as a patently dishonest country that has no serious plan to meet its Paris Agreement greenhouse gas reduction commitment to cut its carbon emissions by 30 percent by 2030. It is an environmental crime against future generations, born of gross negligence, undue risk, scientific ignorance, and willful disregard for the life-ending consequences of heavy oil spills and human-induced global warming. It is a crime against Aboriginal peoples that now threatens to drive a knife in the heart of Canada’s collective search for a new relationship rooted in mutual respect and reconciliation."

And that is the reason why elections matter and why citizen engagement and vigilance is so crucial between elections.

Through our network of Green Writers I learned about an individual who wrote to the Globe and Mail a couple of days ago because they were so tired of the one sided coverage over the Kinder Morgan issue. They objected to the way any one who is against the expansion is labeled an “environmentalist" which they believe is a way of separating us out from everyday British Columbians. They made it clear that there are a broad range of people, kids, moms, dads, grandparents, from all walks of life, who for many reasons do not want to see the pipeline go ahead.

Apparently the Globe went back and looked at their coverage and agreed. They have now assigned a reporter to do a story on who we all are. They asked if we knew other "interesting British Columbians" they could talk to. So if you know of anyone who would be a good example of the regular people who are worried about the risks to our province and are willing to be interviewed, we can pass their information on to the person who has made this contact with the reporter. 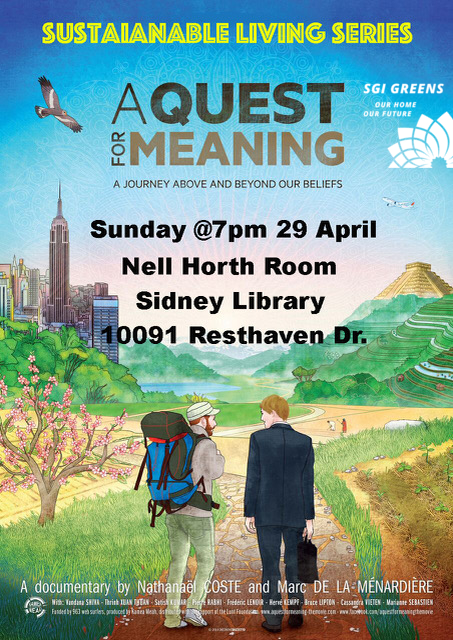 While we can't for a moment take our eyes off Kinder Morgan, there are other ways to stay engaged as well. If you are in the mood for some inspiration, you might enjoy our next event in our Sustainable Living Series entitled, "A Quest for Meaning." The documentary will be shown at the Sidney Library on April 29th.

And if you are a Green Party of Canada member and wish to participate in shaping the future direction of the party, you can now participate in our new policy development process. Submissions for motions to be considered by the membership will be accepted until April 30th. This new process, which is the result of extensive member driven consultation last year, offers more equal opportunities for active and meaningful engagement.

Finally, if you live in Sidney or North Saanich and would like to help Greens support the local food bank, you can participate in the Green table at this Sidney Lions Food Bank breakfast fundraiser. Just drop me a line and let me know that you would like to contribute.