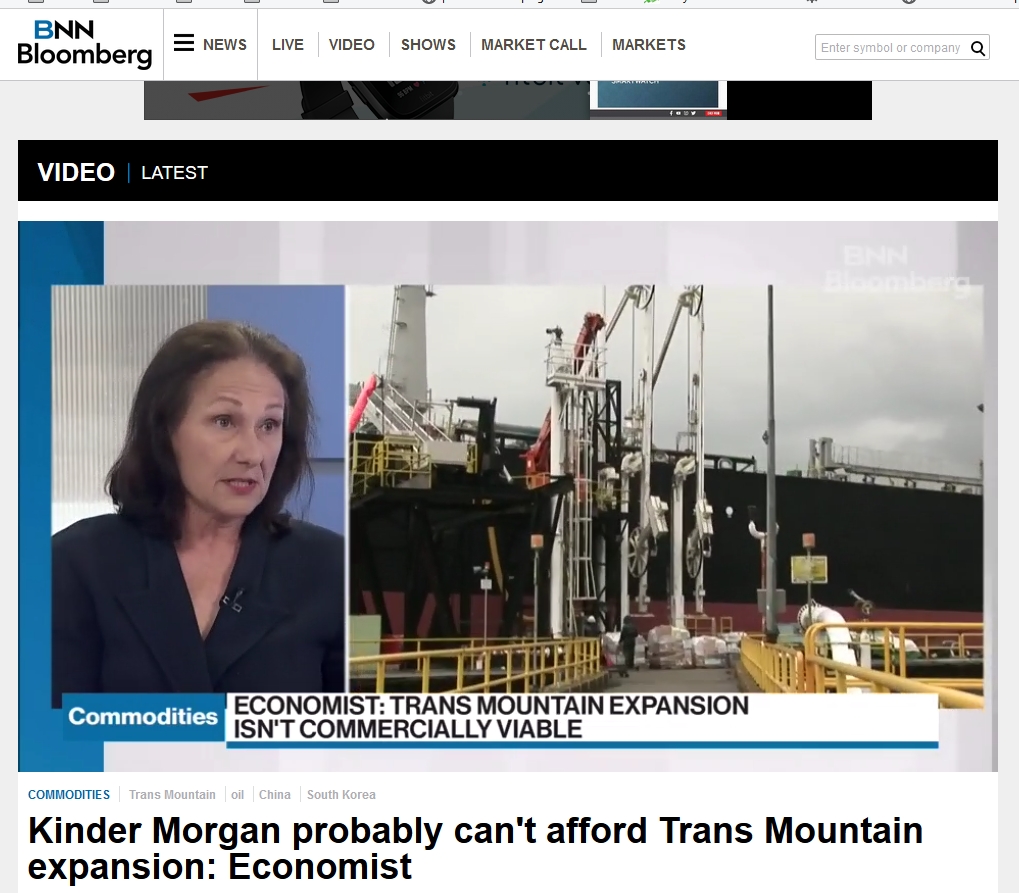 We are less than a week away from the deadline Kinder Morgan has set to allow it to pull the plug on this project without risking default on their credit obligations. As Robyn Allan explained again on Bloomberg last week Kinder Morgan probably can't afford the Trans Mountain expansion and there is no way anyone else can take over the project without buying them out completely. If that happens, Kinder Morgan will have successfully shed a dying asset before it is deemed worthless.

One of the triggers that Robyn points to that will make it worthless is a new IMO 2020 regulation, coming into effect in only three years. It will reduce sulfur emissions among the biggest consumers of heavy oil. Well Resources Inc. effectively made the case for refining or upgrading in Alberta when it had this to say back in October of last year:

"To date, global refiners have led the discussion on how to tackle IMO 2020. At the core of these discussions lies the question: What makes the most economic sense? While some refiners have signaled that they are looking into revamping their operations to produce lower sulfur product from existing feedstock, other refiners are tendering the idea of simply changing to lower sulfur-containing feedstock altogether. 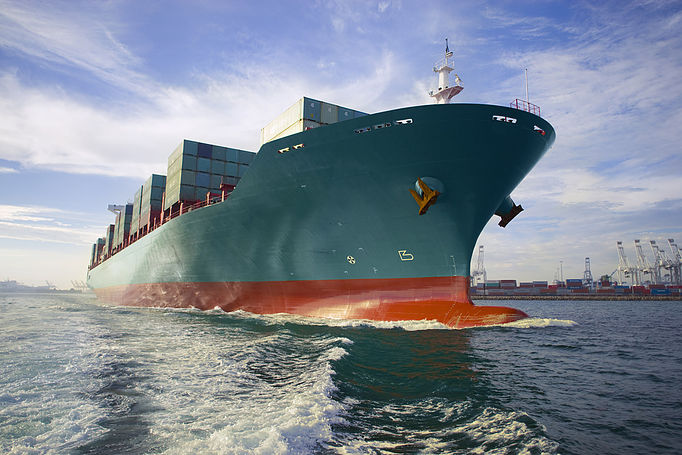 "From Canada’s perspective, this shift could be devastating as the majority of our exported raw bitumen contains 2.0-5.0% sulfur content. By sitting back and allowing the status quo to run its course, the Canadian petroleum industry could very quickly find itself in a weak bargaining position. According to Houston-based William Edwards, president of Edwards Energy Consultants, the effect of new sulfur limits will lower heavy oil prices, increase competition between heavy oil-producing jurisdictions, and ultimately force Canada to shut-in some of its production due to economics..."

John Horgan has held firm in his conviction to not only protect our coast but to protect the sovereign rights of British Columbians. As was pointed out in this panel discussion following a screening of Directly Affected, in order to get this pipeline built the authorities of municipalities and provinces have been trampled on. And if that can happen in British Columbia, that can happen anywhere in Canada.

We elect municipal and provincial governments to protect our local and provincial interests. And of course we elect a national government to protect our national interest. Throughout the history of Canada these, sometimes conflicting, interests had to be negotiated. From the very moment of confederation, through the National Energy Program to Meech Lake, there have been challenges to reconcile jurisdictional rights. In many cases, from health care to police services, jurisdictional boundaries are often complicated.

That's why accurate information is so important. And why the claims that are made by proponents who ask us to carry the risk while they reap the profits, need to be examined carefully. Elizabeth did that yet again when she stood in the House last week and debunked the top five whoppers from Kinder Morgan. 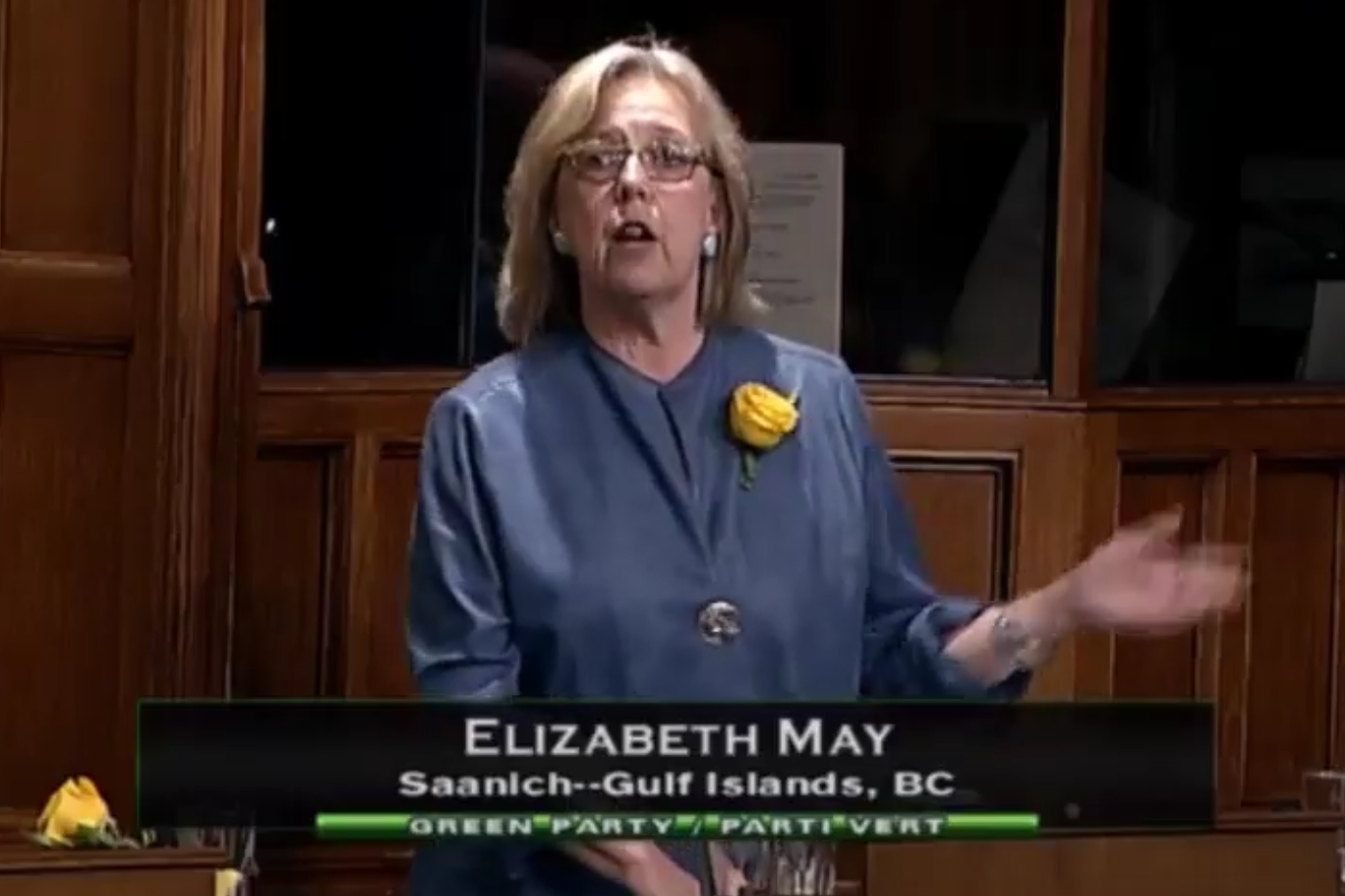 First: The pipeline will create 15,000 thousand jobs.
Kinder Morgan’s own submission to the National Energy Board said its project would create a grand total of 2,500 jobs a year for two years and 90 permanent jobs.

Second: This pipeline has been operated by Kinder Morgan since 1953, shipping dilbit with no problems.
In 1953, the pipeline was run by TransCanada and it was shipping crude, not dilbit. Only in the early 2000 after Kinder Morgan purchased Trans Mountain did it start to ship small amounts of dilbit. (Dilbit still only makes up a fraction of current capacity.)

Third: Dilbit is just like crude and anyone can clean it up.
Kalamazoo, Michigan proved otherwise. The dilbit separated, the diluent floating to the surface made the surrounding neighbourhood sick. Then the bitumen sank to the floor of the river. Studies approximating ocean conditions, show that in ocean water with sand, bits of seaweed, and so on, the same thing would happen.

Fourth: There is a $73 billion benefit to the Canadian economy over 20 years.
That comes from a study, by a company that was widely discredited, which Kinder Morgan submitted to the NEB process without cross examination.

Fifth: "In my last seven seconds, is the claim that we lose $40 million a day, which is totally false."

Instead of actually reconciling the false claims and substantiating the numbers they have thrown around, with the support of mainstream media, the Federal Liberals and Alberta NDP have stuck to their increasingly discredited talking points. Perhaps it would serve them better to listen to the advice of Wal van Lierop, president and CEO of Chrysalix Venture Capital, who wrote this in the Globe and Mail last Sunday: 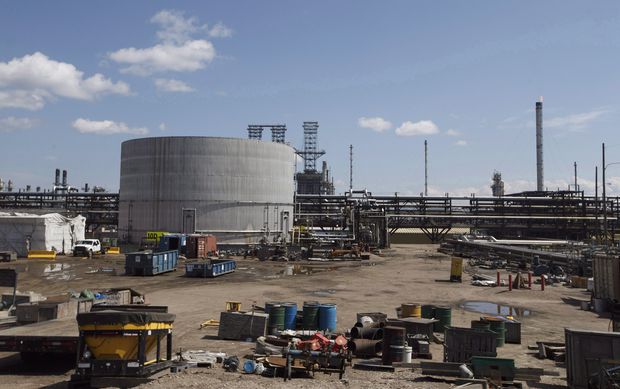 "Let’s get honest about the real outlook for the oil sands. Let’s get some facts. The energy transition will not happen overnight, but the cold numbers may tell that the “high on the cost curve oil-sands oil” will not just strike out much sooner, but much earlier than the fans had hoped for. Are we trying to cheer on a team here that doesn’t have the strategy to win the future game? As such, we may need a Plan B for Alberta sooner, rather than later.

"In particular, the hard-working people in the energy industry in Alberta deserve this. It could be that they are risking their future based on the belief these are sunny times again. They may take out mortgages for new houses and have to pay for those long after the Kinder Morgan pipeline has been written off. The personal stakes are serious. Let’s coach a smart game based on the hard numbers, not environmental idealism or politics, and, in turn, give all the stakeholders some investor certainty. The people of Alberta deserve that."

When Al Gore tweeted about Kinder Morgan recently he was giving us the same warning. The world is moving and as the global economy tilts towards a renewable future, energy dinosaurs will find themselves eclipsed by market forces. That's why building capacity for the new energy technologies is the way to economic prosperity. And no, we don't need the old technologies to finance the new. Buggy whips did not finance the auto industry. Typewriters did not finance the computer industry. Whale oil did not finance the petroleum industry. New industries flourish when the conditions are ripe. 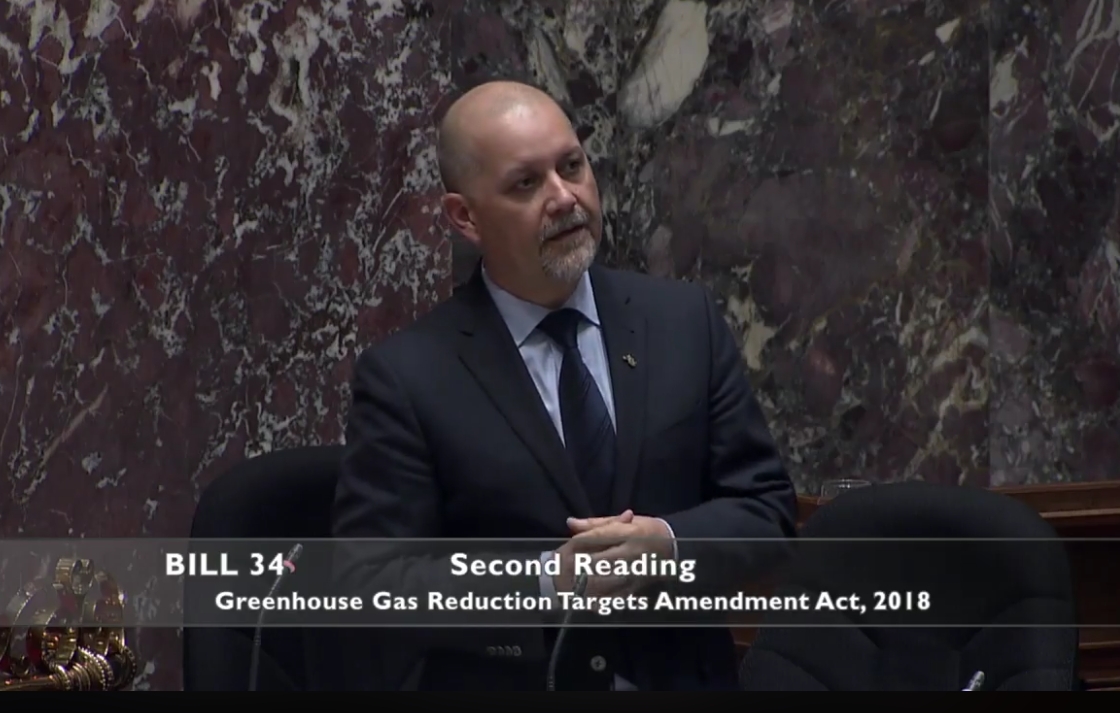 Adam Olsen said it so eloquently in the BC legislature when he spoke to the newly renamed "Climate Change Accountability Act." He reminded the members that they have a responsibility to more than the election cycle of politics. "We have a responsibility that goes much further into the future than four years." He encouraged members to move beyond the rhythm of career politicians seeking re-election and spoke about the inter-generational responsibility he feels as a father.

"We used to be a leader in climate action, and we have an opportunity to regain that position of leadership." Adam points out that Bill 34 is not the action. It is simply the goal setting. It's important to set these goals, create the tone and send signals to the market place so that they know that once again, British Columbia is going to be a leader in climate Action.

We don't have to be held hostage by companies like Kinder Morgan. Being a leader in climate action is something we can all strive for in Canada. Mike Schreiner held a press conference last week where he challenged the two leading parties in the Ontario Election to commit to powering the province with 100% renewable energy by 2050. He also did a one hour interview with the editorial board of The Star where they explored his passion for embracing a new economy. It's a great piece to listen to while cooking dinner if you really want to get to know Mike. 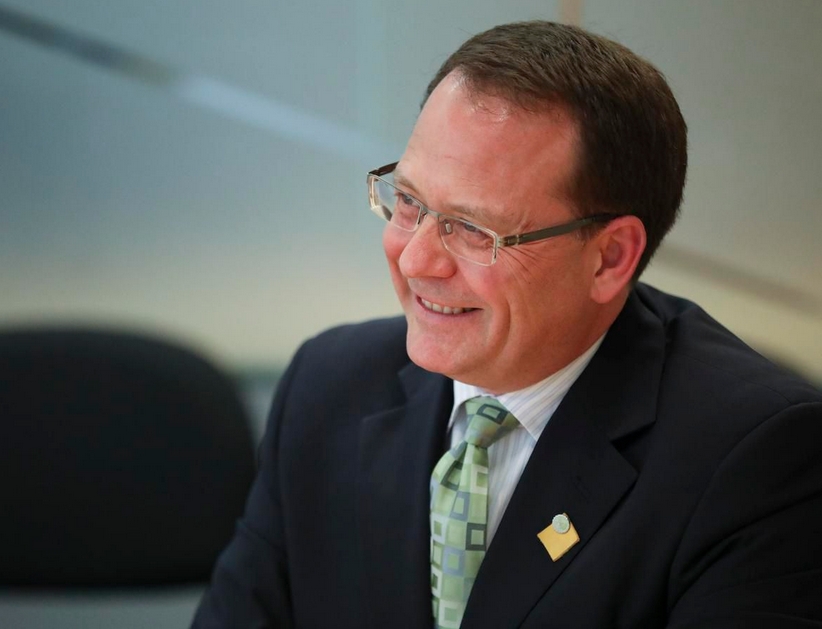 The editorial board was so impressed that they suggested "Guelph voters should consider making history and sending the Greens’ Mike Schreiner to Queen’s Park." But getting to know Mike is an opportunity that the millions of people who tune in to the televised leaders debates in that election have been deprived of. Today at 5pm Eastern there will be a silent protest against Mike Schreiner being excluded from the debates. But Mike is intent on making history anyway. At 6:30pm Eastern Mike will be going live on Facebook to offer commentary on the (unfair) leaders debate. You can tune in here.

Now that the polls have shifted and it's becoming a tighter race between the Ford Conservatives and the Horwath NDP, Ontario is providing a case study for the perils of first-past-the-post no matter where on the political spectrum you sit. As was pointed out in this panel discussion on Electoral Reform that included MLA Sonia Furstenau, just a few percentage points in the vote could give either party a false majority and set one of two diametrically opposed trajectories for Ontario. Talk about economic instability.

Electoral reform, like climate action, is gaining traction in spite of Trudeau's broken promises. In BC we may well learn next week what question will be on the ballot of this fall's referendum. And in PEI the official referendum on PR will accompany the next provincial election. Now Quebec is also in play and as Chantal Hébert writes in The Star, the only party not committed to implementing PR if they win the next election perhaps stands to gain the most from such an outcome. 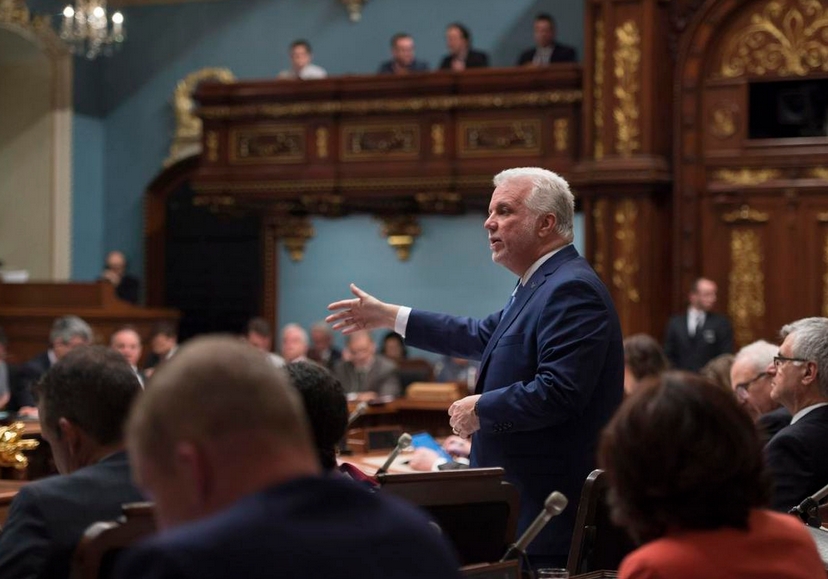 This is significant because without their false majorities won under first-past-the-post, neither Rachel Notley nor Justin Trudeau would find it as easy to push their agenda without providing factual information. PR governments may well still champion pipelines but they would be held more directly accountable and therefore would likely have to make a better case in order to do so. In 2016, during the ERRE hearings Gérard Deltell actually put the question to Professor Russell, “What harm has ever come from first-past-the-post?” The answer: "climate change." Since the early nineties polling has shown that 80% of Canadians have wanted action on climate change but successive 'majority' governments have not delivered.

Finally, before I go, here are a couple of things you might be interested in. On Wednesday May 30th Festival of Oceans Films will be showing in Victoria. On Friday June 1st Adam Olsen's Public Circle Live will feature his legislative wrap up. On Tuesday June 5th there is a Voices of Saanich event entitled "Indigenous Solutions to Environmental Violence, Grounded in Cultural Practice." Our SGI Green Media Group and Events Team will be meeting for potlucks again next week and if you are a member of the Green Party of Canada and live in Saanich-Gulf Islands don't forget we have our AGM coming up on June 17th.