Our Home - Our Family 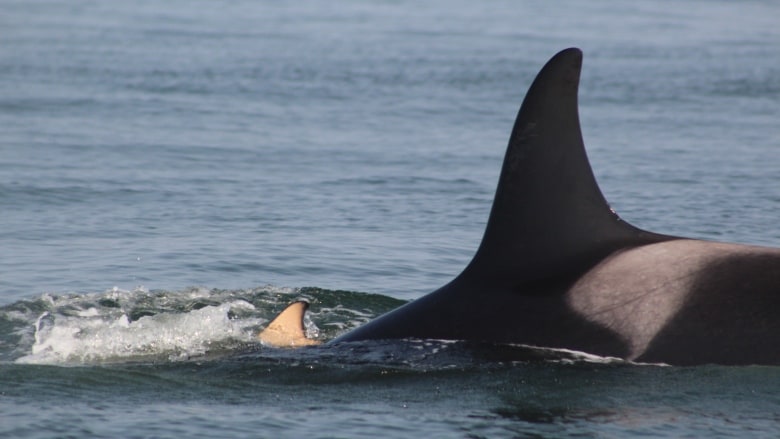 No, that's not a typo. I am in mourning today. In fact, I'm in tears. The Salish Sea is my home. It's the only place on this planet where I feel I truly belong. I have lived in Germany, California, Ontario and Nova Scotia but no place has reached so deeply into my soul. I have drifted on its tides and sailed in its gales. I have watched raccoons scour the beach and crabs scurry through the tide-pools. I have played Mozart to the porpoises as they swam in my bow wave and been surrounded by Orca, waiting patiently, in silence, as they pass me by.

Seventy five percent of all pregnancies in the last two decades have not been viable and it has been four years since any newborn has survived past infancy. The recent images of a grieving mother lifting her dead baby from the depths for eight days were heart wrenching. The baby Southern Resident Killer Whale (SRKW) died a short time after it was born near Victoria, British Columbia on July 24, 2018. The newborn whale was reported alive and swimming with its mother, J35, and other members of J pod near Clover Point on the Victoria shoreline in mid-morning.

A Center for Whale Research (CWR) team was on the water in Haro Strait at the time and immediately responded to photo-document the newborn calf for the long-term census study they maintain for the US and Canadian governments. Unfortunately, by the time the CWR crew arrived on scene, the newborn calf was deceased, and the pod had traveled several miles eastward of the reported sighting location. The baby’s carcass was sinking and being repeatedly retrieved by the mother who was supporting it on her forehead and pushing it in choppy seas toward San Juan Island, USA.

The mother continued supporting and pushing the dead baby whale throughout the day until at least sunset. A resident of San Juan Island near Eagle Cove reported: “At sunset, a group of 5-6 females gathered at the mouth of the cove in a close, tight-knit circle, staying at the surface in a harmonious circular motion for nearly 2 hours. As the light dimmed, I was able to watch them continue what seemed to be a ritual or ceremony."

For the next eight days, reports kept coming in that Tahlequah, so named by the Whale Museum in Friday Harbor, was not giving up. Continuing to raise her newborn to the surface, perhaps hoping someone would notice the desperate plight of her family. The CWR and other organizations like Raincoast have been sounding the alarm for a long time. The southern resident killer whales are starving to death. Researchers are already worried that another young whale in the pod — J-50 — could be the next to die. The four-year-old is becoming increasingly emaciated.

"We as a species are failing, we humans are failing all of the other species around us." Adam Olsen mourns this member of our family in traditional fashion, by telling family stories, personal stories. He reminds us that as we see this matriarch mourning the loss of her calf, we need to recognize that the time now is very short, that we don't have the luxury of dragging our heels and we need to turn talk to action. "We are responsible for this. We have a responsibility to lead." 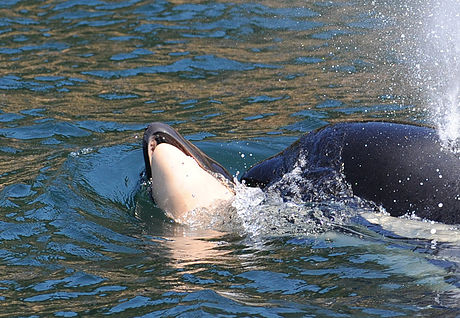 The National Energy Board assessment of the Trans Mountain Pipeline project made it perfectly clear. Even if there are no spills and no accidents, the increased tanker traffic spells doom for these Orca. They need to echolocate their food and communicate over long distances and since they don't have the option of eating tofu like some of us, they are almost totally dependent on finding the Chinook Salmon for their sustenance. The dramatic decline in Chinook, combined with increasing noise pollution is causing this travesty in our back yard.

While this story was unfolding, a judge, enforcing a corporate injunction in Burnaby, heard this statement from the Crown just prior to sentencing: "Seniors are the population that must be deterred and the day has been reached that the sentence they receive must ensure that they are deterred!" Two seniors were sentenced to 7 days each behind bars and more will follow on August 15th. They have not broken any statutory laws. They have simply disobeyed an injunction issued at the request of a Texas multinational corporation to protect a permit whose validity is still being challenged in the courts.

Governments and legal systems acting on behalf of big oil and against the interests of our citizens and our environment is the subject of Kevin Taft's book, Oil's Deep State. News Flash: Efforts are currently underway to organize a Kevin Taft Tour with at least five speaking engagements on the lower mainland, Salt Spring Island, and Vancouver Island: West Van on September 9th, Vancouver on September 10th, Ganges on September 11th, Victoria on September 12th and Courtenay on September 13th. Watch this space for details, links and ticket information.

In the meantime, here are a number of ways you can stay engaged.

On August 15th, Elizabeth will be hosting the very first Wildfire Preparedness and Prevention Town Hall Meeting at the Mary Winspear Centre in Sidney, in conjunction with the North Saanich Wildfire Prevention Committee and Adam Olsen, MLA for Saanich North and the Islands. The purpose of this meeting is to educate the public on the need for wildfire preparedness in North Saanich, and to discuss and brainstorm methods for preparedness and prevention. Click here for details.

On Thursday August 16th, you can participate in a very special Voices of Saanich event in Sidney. The Saanich North and the Islands Provincial Riding Association is pleased to host the BC Greens Platform Director, Liz Lilly, in a review of the Party's vision for BC in the 21st Century. This is the first in a series of meetings to be held around the province where Liz will present the rationale that was applied in developing the 2017 BC Greens election platform, as well as an overview of the prevailing economic paradigm and why it is failing to deliver a “sustainable, well-being economy”.

Elizabeth is home for the summer and starts her fall series of town halls on September 4th. Town halls will be held in the following communities: North Saanich, Sidney, Galiano Island, Saanich, Mayne Island, Salt Spring Island, Pender Island, Central Saanich, Saturna Island and Piers Island. An invaluable opportunity to engage with her constituents, Elizabeth looks forward to hearing their concerns and priorities. She will also offer updates about her latest work in the House of Commons. Click here for details. 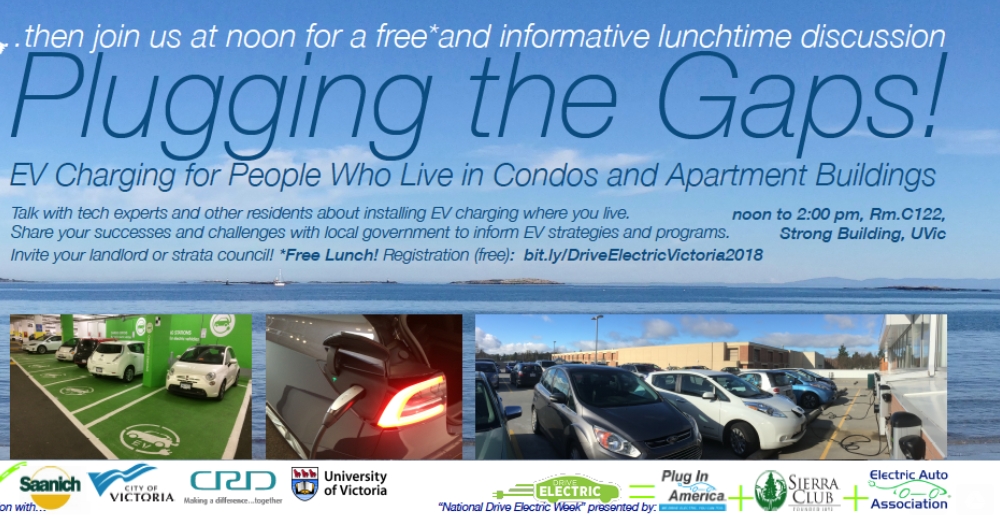 And if you missed our fabulous Electric Car Rally last weekend, you can put this event on your GPS for September 9th. They need EV drivers to give EV Scenic Rides to Oak Bay Marina and back, and some to offer EV Test Drives around Ring Road to inspire others to get off fossil fuels. For people who live in condos and apartments, they are co-hosting a lunchtime discussion with the District of Saanich, City of Victoria and the CRD, on how to help people get EV charging in Multi Unit Residential Buildings. Register here.

While you are considering if an EV is in your future, you might want to take a listen to this CBC podcast and get a glimpse into how Electric Self Driving Cars might change transportation, city planning and lifestyles, in very fundamental ways. People all over the world are building a fossil free future and creating a world of community-led renewable energy. And California is mandating that every new home be fitted with solar panels by 2020. 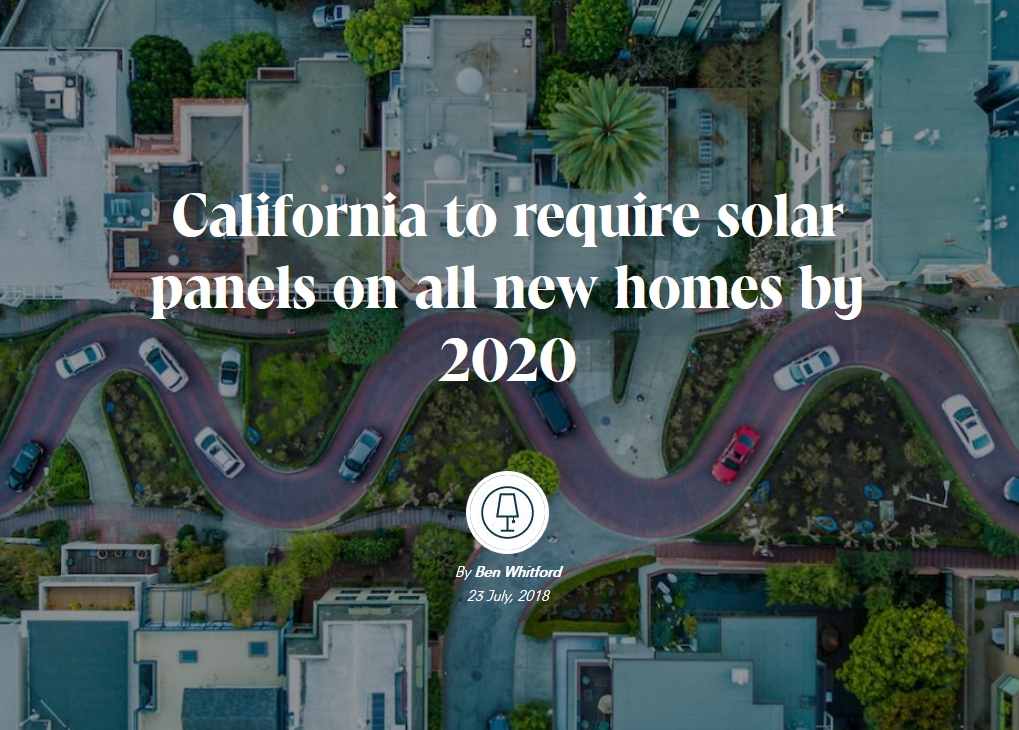 That move, which could see 65,000 solar installations a year in the so-called Golden State, won plaudits from the construction industry, and more cautious praise from environmentalists, amid hopes that it would curb statewide carbon emissions and boost values for homeowners. “This adoption of these standards represents a quantum leap,” California Building Industry Association engineer Robert Raymer told the CEC. “You can bet every state will be watching to see what happens.”

Meanwhile, Bill Henderson laments in the Georgia Strait that back home here in Canada, we currently lack the will that's required: "We need leadership in confronting the reasons why we have failed over the past three decades. We need leadership in opening up the debate about what effective emission reduction entails," writes Bill. "The Trudeau government will be the fifth consecutive Canadian government to promise needed climate mitigation but then do nothing effective to actually reduce greenhouse gas emissions at a scale now required."

Lynne Quarmby gives us eleven compelling reasons why we need to stop the Trans Mountain pipeline and a recent report from the International Renewable Energy Agency (IRENA) shows that renewable energy and energy efficiency can, in combination, provide over 90% of the necessary energy-related CO2 emission reductions.

Everyone tries to do their part to build awareness but all this effort might not be enough to stop what amounts to the extermination of our Southern Resident Killer Whales if we continue down our current path. They are warning us that both our actions and our inaction have consequences. That the life which has existed here for thousands of years can be extinguished by our recklessness in a heartbeat.

"We do know her family is sharing the responsibility of caring for this calf, that she's not always the one carrying it, that they seem to take turns," Jenny Atkinson, director of the Whale Museum on San Juan Island, spoke to CBCs As It Happens. "Grief affects individuals in different ways... Ceremonies can go on for days [and] even though this calf is no longer with them physically, emotionally and spiritually this calf will always be a part of this family group."