Are Canadians "ordinary" or extraordinary? 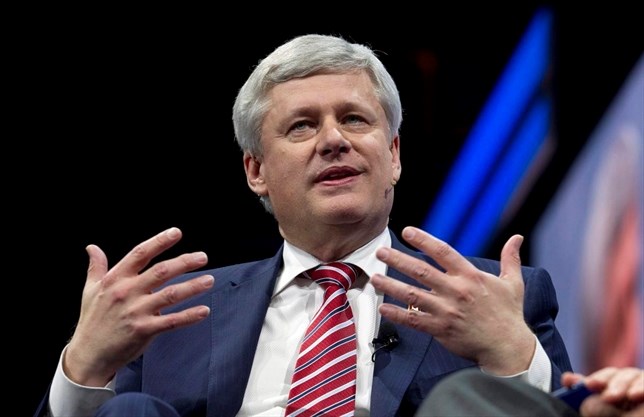 "In his new book, Stephen Harper warns that standing up for the environment makes for bad politics, especially in a populist age when parties are looking for the votes of 'ordinary' people." Susan Delacourt quotes a new book entitled Right Here, Right Now: "Political parties, including mine, have won elections just by opposing a carbon tax. The reason is simple. It is ordinary voters who pay carbon taxes."

But Delacourt goes on to point out that "not surprisingly perhaps, Green Party leader Elizabeth May holds exactly the opposite view. In a speech to her party's convention in Vancouver last month, May said ordinary Canadian voters are more than ready to hear the truth about the climate crisis in the 2019 campaign. She intends to build her campaign around the idea that Canadians are ready, even eager, to have politicians telling the truth to them, and climate change is a perfect entry into that discussion.

"May says climate change can be presented as a "hope" issue to the Canadian electorate, but it might just be the hope of avoiding a fearful future, as laid out in the new and disturbing report of the Intergovernmental Panel on Climate Change (IPCC.) The report warned that the world has only about 12 years to get its act together to avoid climate catastrophe. Or, to look at it in political terms, about three federal election cycles. 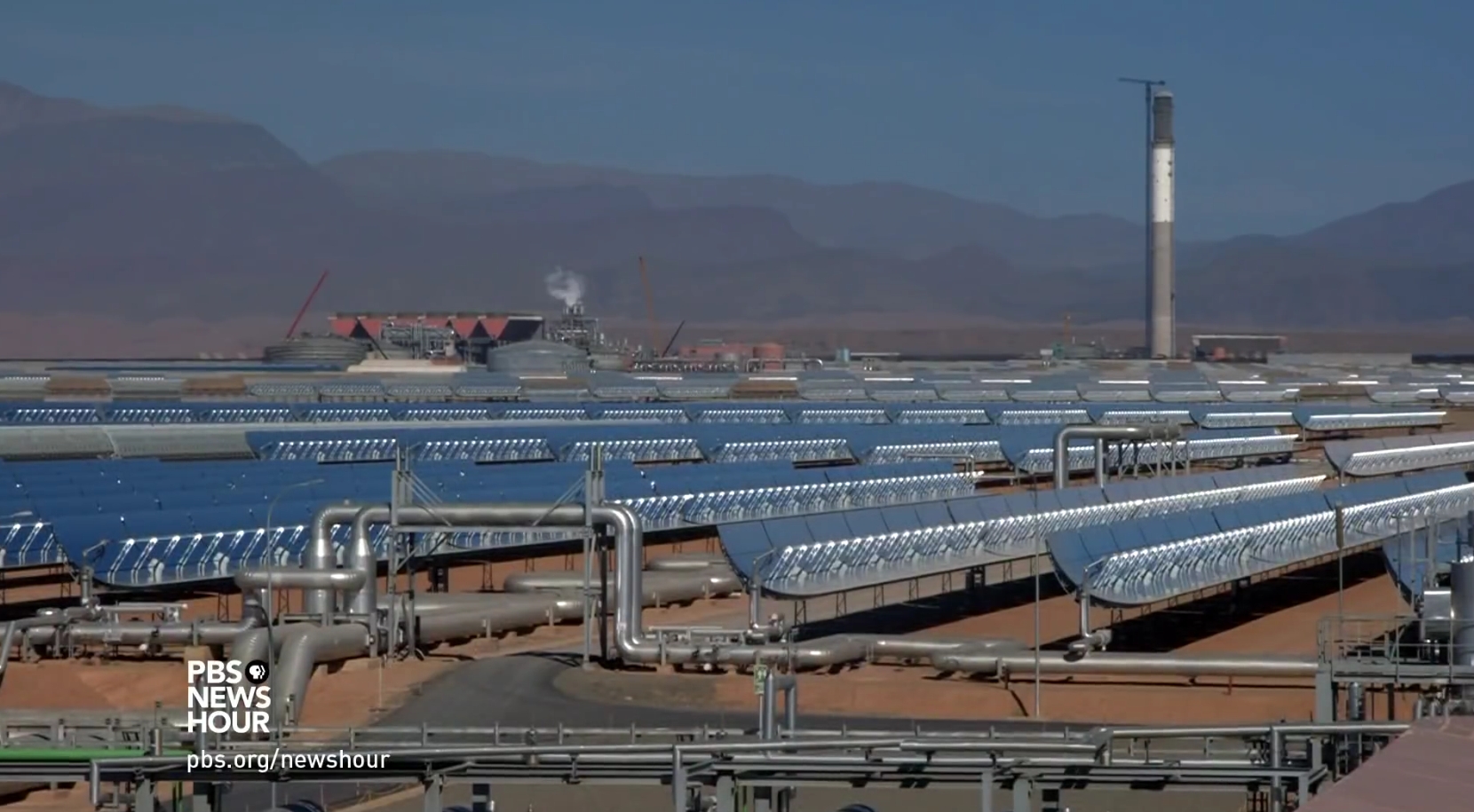 "That means that some of the people currently sitting in Parliament — or vying for office in 2019 — could still be in the Commons when it becomes too late to act for the survival of the planet." To underscore that point, Delacourt quotes Elizabeth: "We're no longer talking about future generations. We're talking about the lifespan of our own children, who are alive right now."

That reality, while apparently still lost on most politicians, has been recognized by the carbon industry for some time. Just like Kinder Morgan, who is laughing all the way to the bank now with our 4.5 billion dollars in their pocket, smart oil money is looking for ways to dispose of their stranded assets. And governments hungry for power are just gullible enough to buy what they're selling. Jeff Ruben was clear when he was interviewed by Bloomberg just after the cancellation of Energy East that the tar sands are a stranded asset and the market case for them expanding just isn't there.

We've written about $10 a barrel equivalent solar energy on this blog for two years now. We recently highlighted that "Electric has gone Audi" and last week Reuters reported that Chernobyl is going solar. “It’s not just another solar power plant,” Evhen Variagin, the chief executive of Solar Chernobyl LLC, told reporters. “It’s really hard to underestimate the symbolism of this particular project.” In Northern Africa, Morocco is working hard to become the Saudi Arabia of solar and be part of a network of desert states that will supply Europe with solar energy. And in Montreal there is a new all electric Taxi company that is quickly gaining popularity. 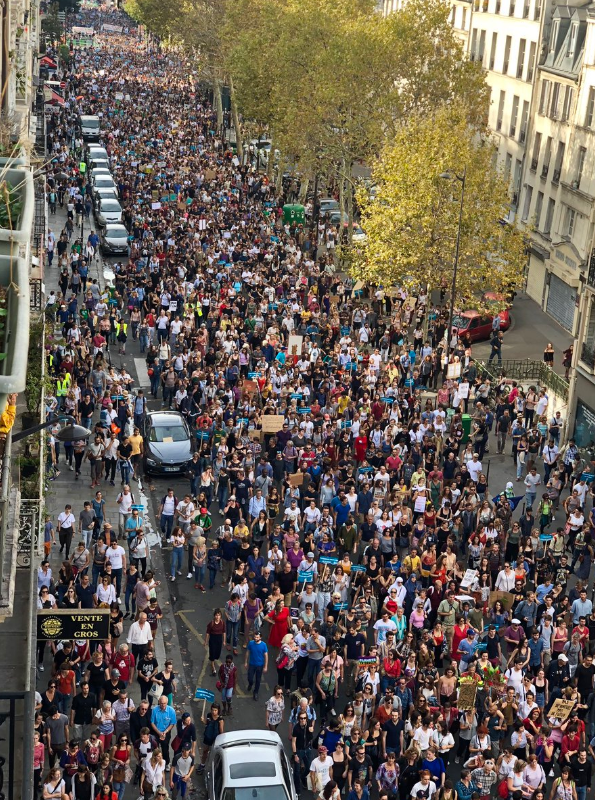 Even before the latest IPCC report was released, the world was waking up. But now it seems that as up to 50,000 take to the streets in France, the media may finally be taking note. Margaret Sullivan wrote in the Washington Post last Monday: "This subject must be kept front and center, with the pressure on and the stakes made abundantly clear at every turn. There is a lot happening in the nation and the world, a constant rush of news. Much of it deserves our attention as journalists and news consumers. But we need to figure out how to make the main thing matter.

"In short, when it comes to climate change, we — the media, the public, the world — need radical transformation, and we need it now. Just as the smartest minds in earth science have issued their warning, the best minds in media should be giving sustained attention to how to tell this most important story in a way that will creates change. We may be doomed even if that happens. But we’re surely doomed if it doesn’t."

The same day the BBC hailed it the final call to save the world from climate catastrophe. "We used to think if we could keep warming below two degrees this century, then the changes we would experience would be manageable. Not any more. This new study says that going past 1.5C is dicing with the planet's liveability. And the 1.5C temperature "guard rail" could be exceeded in just 12 years, in 2030."

On Tuesday Crawford Kilian asked this question in the Tyee: "And how are our politicians responding? Good luck finding the term “global warming” on the Canadian Conservative Party’s website. The Liberals offer lots of opportunities to support Trudeau (and get on the Liberals’ mailing list). The NDP promise vague generalities: “Establishing binding targets and clear standards to cut greenhouse gas emissions,” etc. Only the Greens offer real numbers that roughly match those of the Special Report."

The report he is referring to is of course the Intergovernmental Panel on Climate Change (IPCC) report Elizabeth warned us about last week. Kilian: "The IPCC doesn’t even seem to think most citizens will read it; the summary is for “policymakers,” the wonks and their political masters, who will translate its findings into whatever they think will get them re-elected. That will take considerable spin, because the Special Report tells us we’re screwed. Even to be a little less screwed, we’ll have to overturn everything in our society, politics, and economy — just to keep the global temperature from rising more than half a degree Celsius." 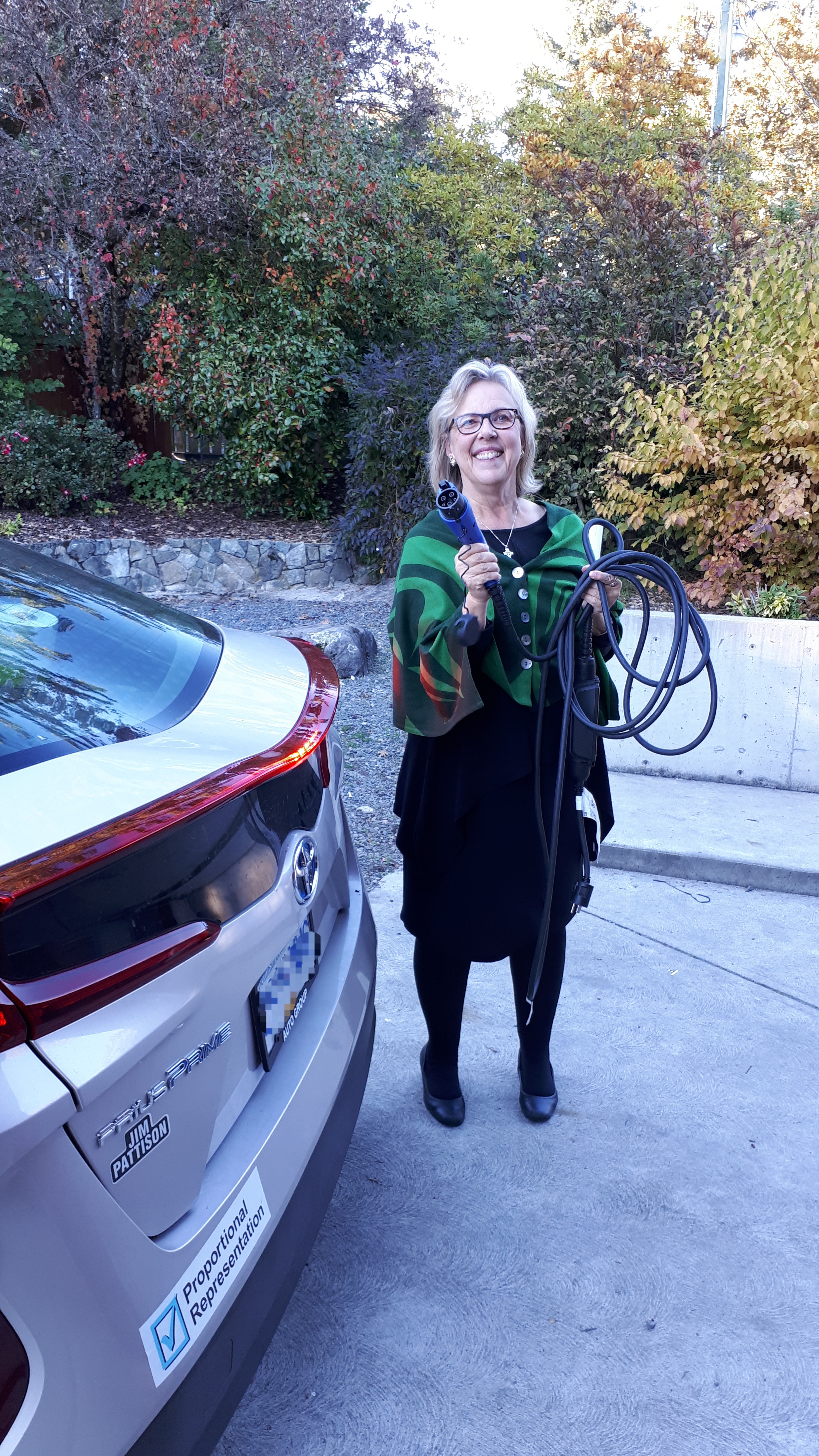 This barometer suggests that the majority of his readers are either angry or frightened. Reactions that are likely shared by anyone who is prepared to comprehend the reality of what we are facing. "The bottom line," Sue Andrews and Jan Slakov wrote in the Times Colonist, "the world we have inherited, the world we love is in danger and it will take an unprecedented mobilization to protect it.

"Citizens Climate Lobby is a group that empowers everyday citizens to work for change. Since its inception in 2007, hundreds of groups have been formed in the U.S., as well as more than 30 nations, ranging across the alphabet from Australia to Ukraine. Canadian members are headed to Ottawa this week to meet with their MPs. Their message? Working to protect the climate is a matter of survival. It makes sense for everyone, regardless of political or other divides."

Although Pete Poovanna (scholar, research fellow, engineer and writer) doesn't mention electoral reform by name, he points to the instability of our ideologically driven, dog whistle politics, and the inherently unstable and short term policy framework they generate, when he suggests that Canadian democracy isn't up to the challenge of climate change. Perhaps it's not in its current form, but it could be.

Yesterday we hosted a joint fundraiser with our sister EDA (Electoral District Association) where we raised $30,000 from 80 generous and concerned citizens, in 20 minutes. Elizabeth spoke of our role as Greens in reshaping the discourse, embracing what is really happening and instead of false promises, offering Canadians hope that is grounded in honesty, integrity and a vision for a secure and viable future for our grandchildren. But it was David Merner, the other speaker, who personified the compelling change that is possible.

You see, David ran for the Liberals in the last election in the very same riding where he has just been nominated to run as a Green. David is doing it because he is a man of principle. He told us that Justin Trudeau came to his campaign office in 2015 with the promise that it would be our last election under first past the post and that he would ensure the environmental assessment process would be rebuilt before any projects would move forward: "Governments grant permits but communities grant permission."

It was not just David who realized that bait and switch power politics is not going to unite us to face this existential crisis.  There were lifelong NDPers and other Liberals who were proud to donate and become members of the Green Party of Canada. People not only opened their wallets but their hearts, committed to working on campaigns, canvassing and sharing their dream for a bright future with fellow Canadians. 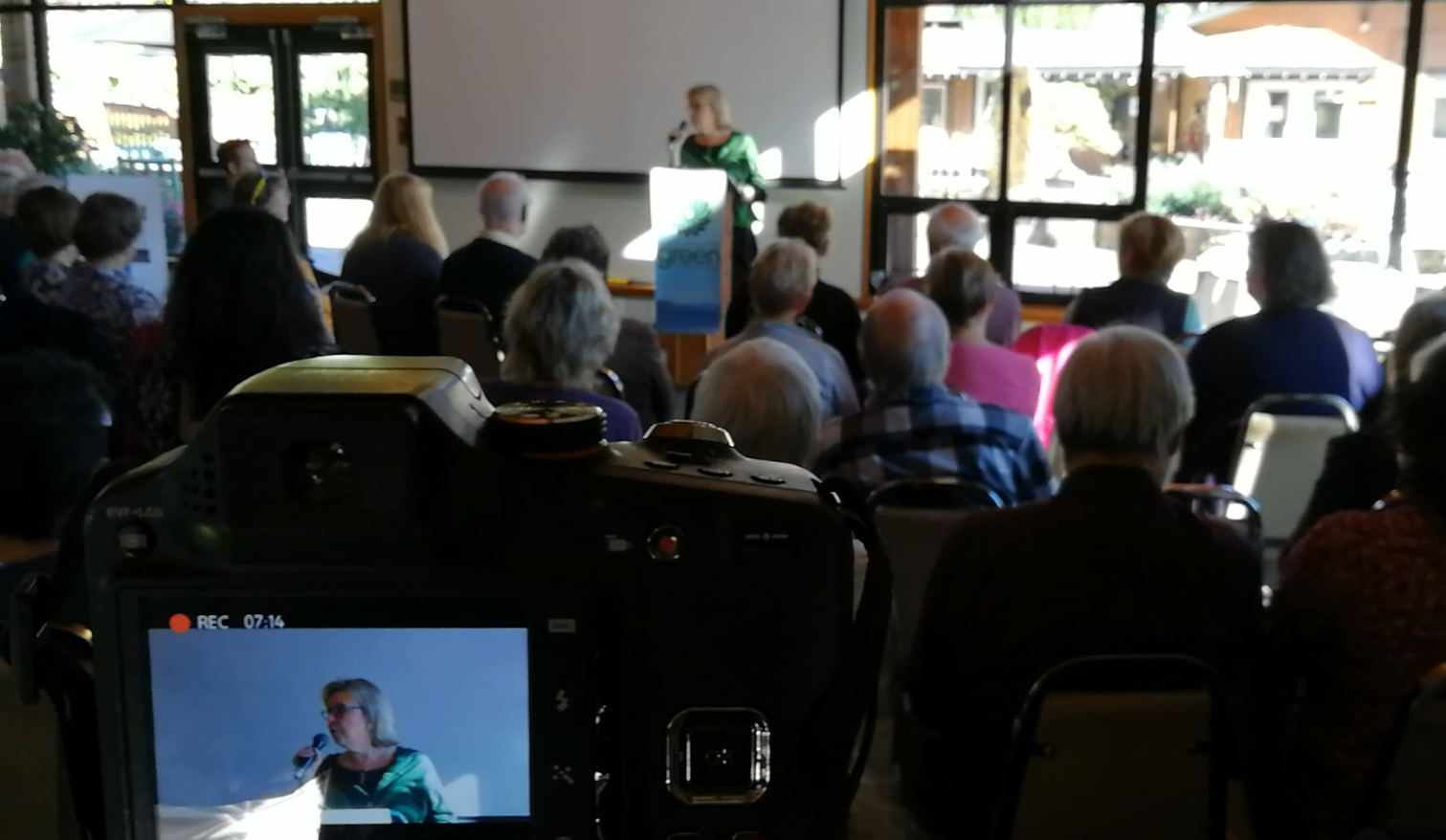 As Elizabeth discusses in this comprehensive podcast interview, the economy, social justice, the environment and our political system are all deeply interconnected and interdependent. There is no time to waste and incrementalism is no longer an option. We must change our voting system to embrace a less confrontational more stable policy development process. When Andrew Coyne comes to Vancouver on October 25th he will no doubt make that point forcefully. But we also have to prepare for a pivotal election under first past the post in 2019.

Future students of history will demand that the parliamentarians we elect next year take responsibility and act decisively to avoid a climate catastrophe. And right now it could not be more clear that this means us. Greens are the only party with the courage to develop a comprehensive strategy which incorporates all aspects of this global challenge. And Greens are the only ones bold enough to envision a future where we can all work together, across borders and political divides, to rescue our civilization.