voices at the table 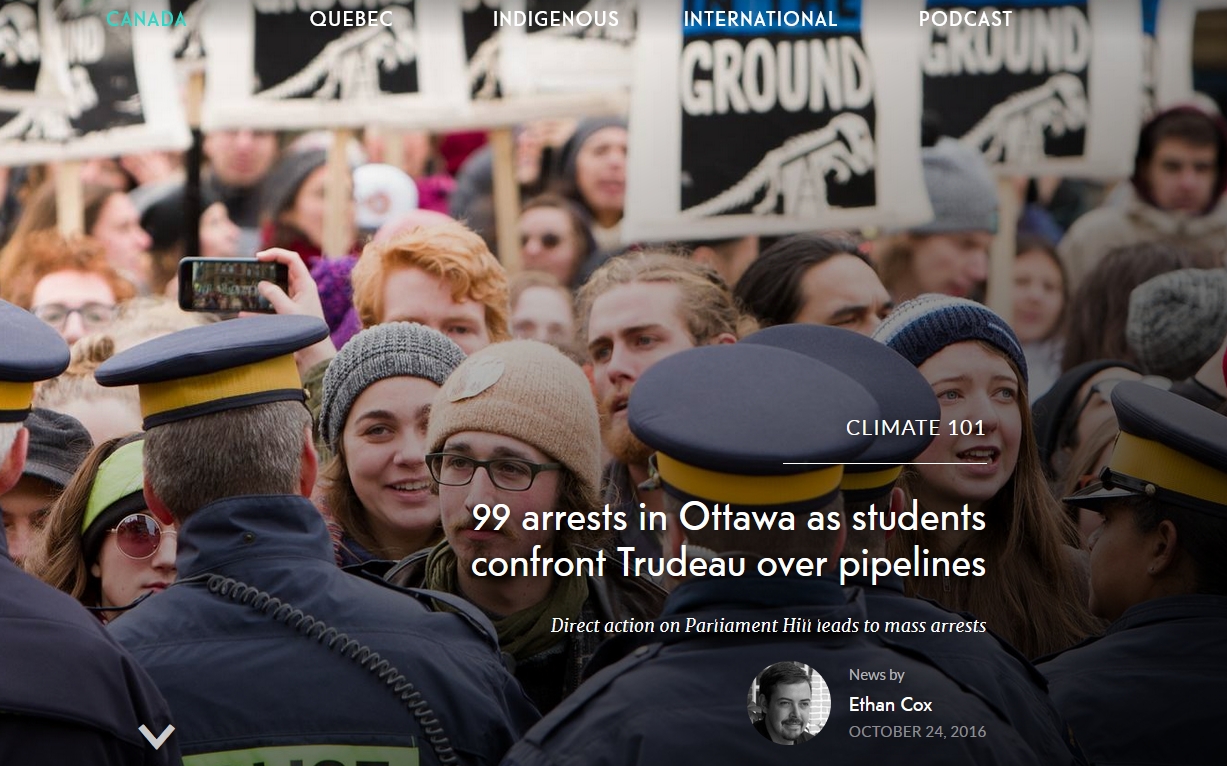 Last Wednesday Ricochet reported that close to 100 students and youth were arrested on Parliament Hill for their participation in what organizers described as the largest act of youth-led climate civil disobedience in Canadian history. “Climate leaders don’t build pipelines,” Sophie Birks, a McGill University student who was arrested at the action, is quoted. “My generation wants to see real action on climate change and Indigenous rights. That starts with rejecting the Kinder Morgan pipeline.”

Meanwhile rabble's headline reads "Trudeau goes bold on emissions..." stating that the Trudeau government has taken the bull by the horns and imposed a carbon-pricing scheme on four provinces -- Manitoba, Saskatchewan, New Brunswick and Ontario -- which account for nearly half of Canada’s population. They report that Elizabeth was happy to give the Liberals at least a passing grade, while adding that there is “much more to be done.”

Exactly how much more, Elizabeth makes clear in her own press scrum in the foyer of the House. "You have to have a plan and you have to have a goal. The goal must be 45% reduction in greenhouse gasses by 2030. To get there you start with a price on carbon. Check. Let's also eliminate fossil fuel subsidies. That's not happening. In fact they have effectively increased fossil fuel subsidies by deciding to buy a pipeline. Let's help Canadians put solar panels on their roofs. Let's talk to municipalities. The mayors and councils across this country have done more since 1992 than any other level of government to deliver climate action. 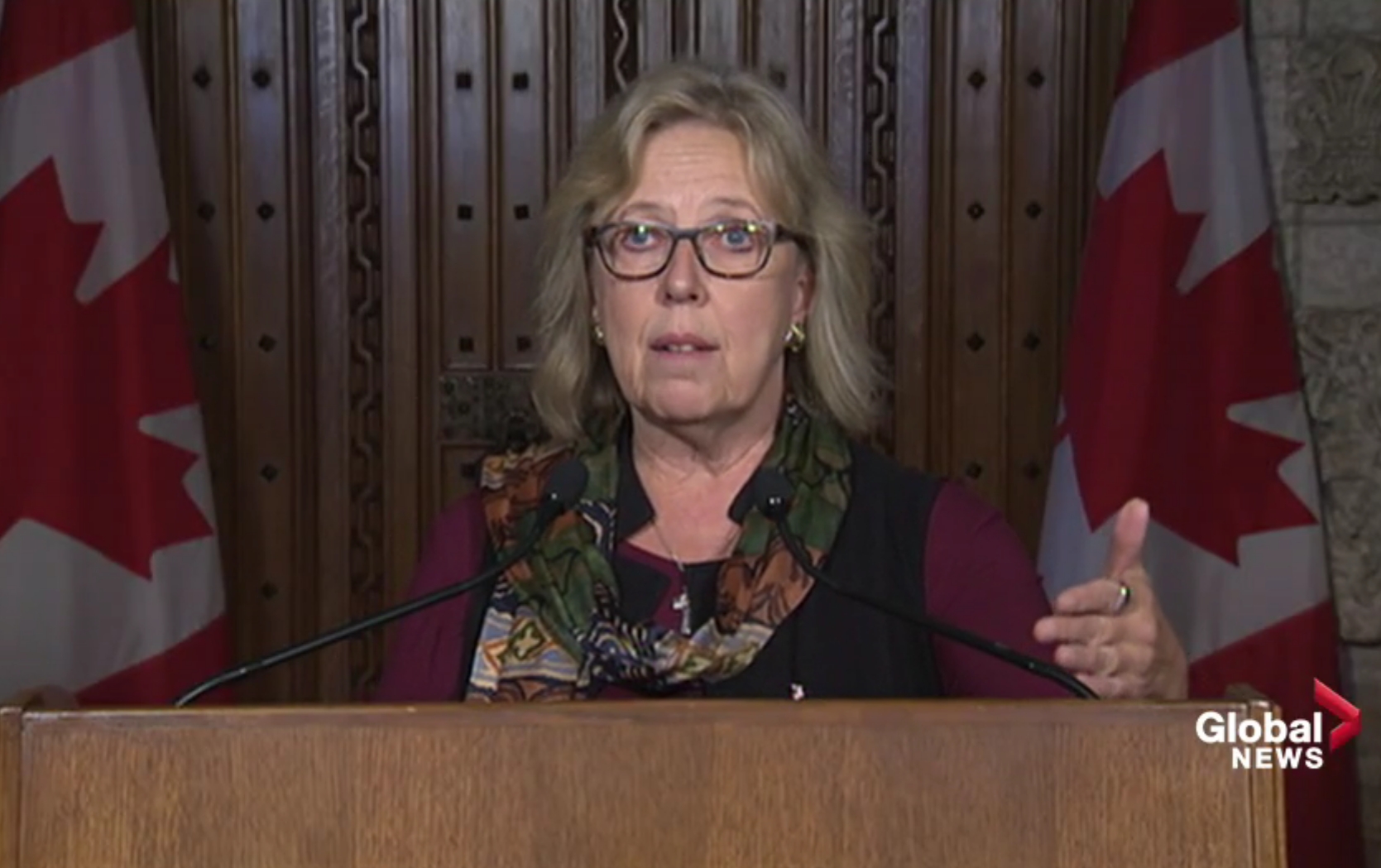 "I can't state strongly enough, the role that Canada has to play in the world should not be missed because when we stepped up, whether it was Brian Mulroney taking on apartheid in South Africa or Catherine McKenna being the first minister from an industrialized country in Paris to say the right target is 1.5 degrees, we had an impact. We were the first in Paris. Within 24 hours all the other industrialized countries said ok, Canada went first, we'll go with them." Imagine if we had not taken the lead, and in light of the recent IPCC report, were now working on a 2 degree global target.

"You're saying we need stronger targets but they're having a hard time selling these," a reporter challenged Elizabeth. "The reason it's hard to sell is that you can't sell mediocrity," was Elizabeth's response. Mediocrity doesn't inspire people, she pointed out. What you can sell is real action. The carbon price alone is not enough (especially at current levels) to meet the Paris targets. Everybody who studies climate science knows this. So when you're attacked on both sides, perhaps it's better to take real, decisive and meaningful action. Then let the conservative argument against this carbon dividend evaporate as the escalating rebate checks start arriving in the mail. 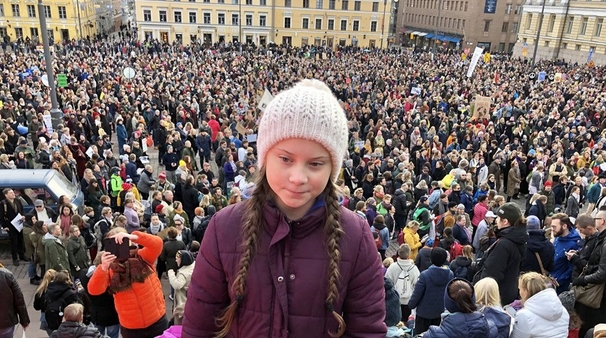 It is this kind of bold and decisive action that is needed to prepare for the technological convergence that Tony Seba keeps warning us about. It's bold action that holds oil companies to account even when they sidestep their seeping liabilities by selling the drilling operations like this company did. It's bold action that would prevent companies from systematically misleading investors about climate change like Exxon did. It's bold and decisive action that could take much more substantial carbon fees and redirect them to things like electric vehicle rebates and the kind of mass transit breakthrough recently implemented in Dunkirk.

And it's bold action that answers the call of this young lady. "The politics that's needed to prevent the climate catastrophe—it doesn't exist today," says Greta Thunberg, a 15-year-old from Sweden Speaking to a crowd of 10,000 people gathered in Helsinki. "We need to change the system." The people who participated in last Saturday's "The Time to Act is Now!" demonstration are demanding that politicians from all of Finland's parties commit to cutting off subsidies for fossil fuels by 2020 and totally outlawing dirty energy by 2035. 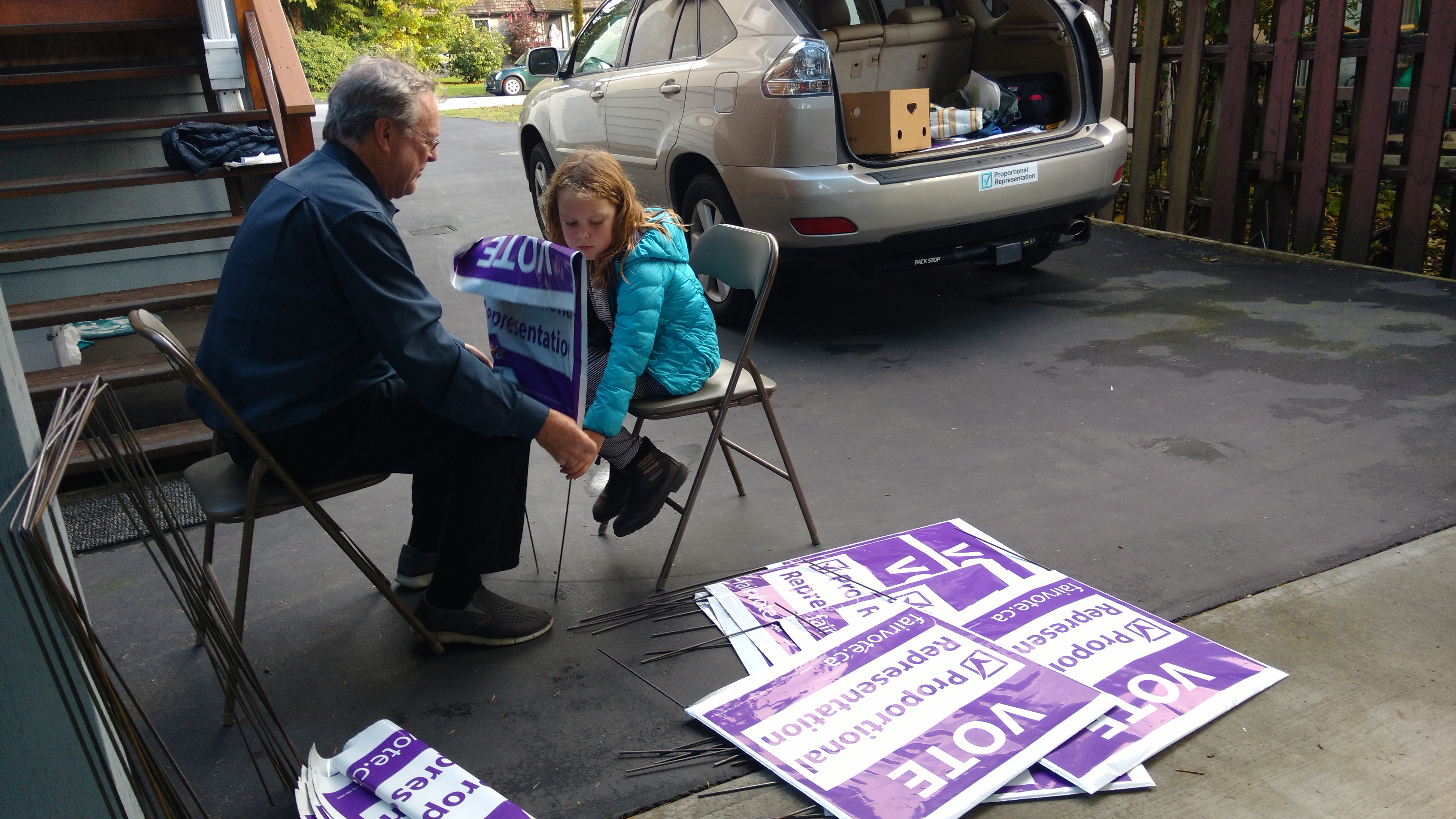 But others are calling for even more. Last Sunday Lorin Fries wrote in Forbes Magazine about "ambitious ideas to meet this challenge is to enable a regenerative revolution, one that supplants our extractive economic model and goes beyond “sustainability” to draw down carbon and reverse course on climate change." The Friday before, the Omega Center for Sustainable Living live streamed an event in North Vancouver that showcased the "Drawdown" project. It offers "the most comprehensive plan ever proposed to reverse global warming."

But to implement these bold steps takes more than individual actions. On their site the team that's making the film 'Well Being Economics' has a clip that talks about the fallacy of the GDP. In this 2 minute clip they ask the question: "Instead of endlessly growing the GDP, what if we started to grow the time we get to spend with our family, if we grew the health of our rivers and forests, if we grew the happiness of our communities, if we grew the quality of life in general?"

There is no law of nature that says the rich must get richer and that the poor must get poorer while the planet must die. "But ultimately nothing is going to change until there is action in politics. Yes, eating less meat, putting solar panels on your roof and donating to charity are all great things to take part in. But, they're not going to be enough. Not by a long-shot. This needs to become political.

In a variety of ways, others are saying the same thing. While promoting his new book, "America: The Farewell Tour," Chris Hedges recently spoke about "the rivets popping off of global capitalism" with Dorothy Woodend of the Tyee. "If there is a not a radical reconfiguration of our relationship to the biosphere, then we’re finished. Sooner rather than later. But for corporations profit is the only thing that matters. Neoliberalism is not even economically rational, because they’re driving the country [the US] towards collapse. It’s an economic and political policy where you force an entire nation to kneel before the dictates of the marketplace. "It is suicidal, as we can see in the refusal to address the issue of climate change. We don’t have any time left. If you’re not in some state of despair, then you’re not facing the reality around us." 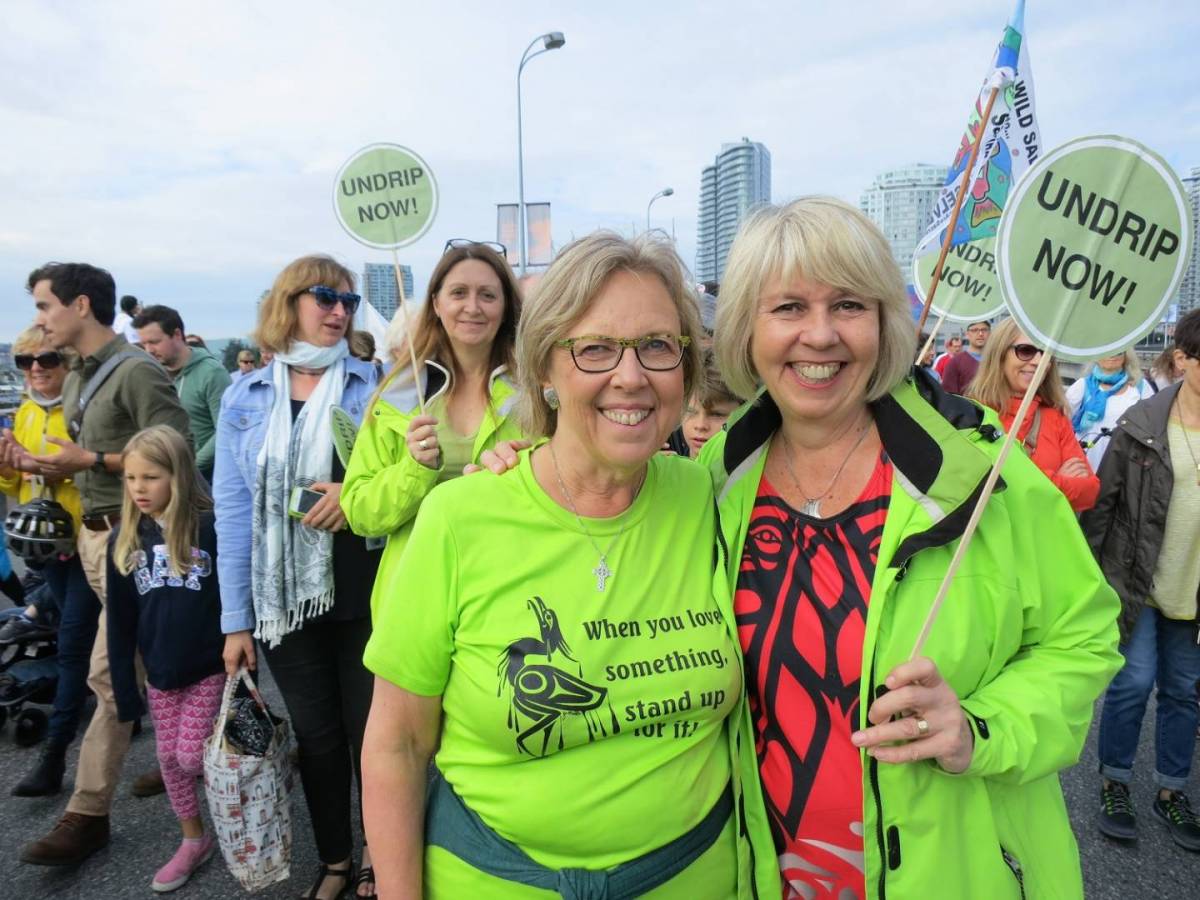 In her second podcast, Jo-Ann Roberts interviews Michael Harris about the state of politics in Canada. Harris is not optimistic. He also sees a tremendous despair in the land. "They make the greatest mistake who think that because they can do little, they can do nothing." Towards the end of the interview Harris highlights Elizabeth's exemplary commitment to bringing integrity back into politics. "Elizabeth doesn't play the game the way a lot of the other ones do. When I said to her once that she better take her foot off the accelerator a little, she told me: "Hey, I wasn't put here to goof off."

And it's that kind of determination that resulted in a Green sweep in municipal elections last weekend. Only a handful of municipalities officially ran candidates under the Green banner but Greens were elected to municipal office across BC. Only three politicians in the October 20th election received more than 70,000 votes—all Greens. The top seven vote-getters in the Vancouver election were all Greens. Perhaps signalling a real awakening to the alternative approach that Greens champion. 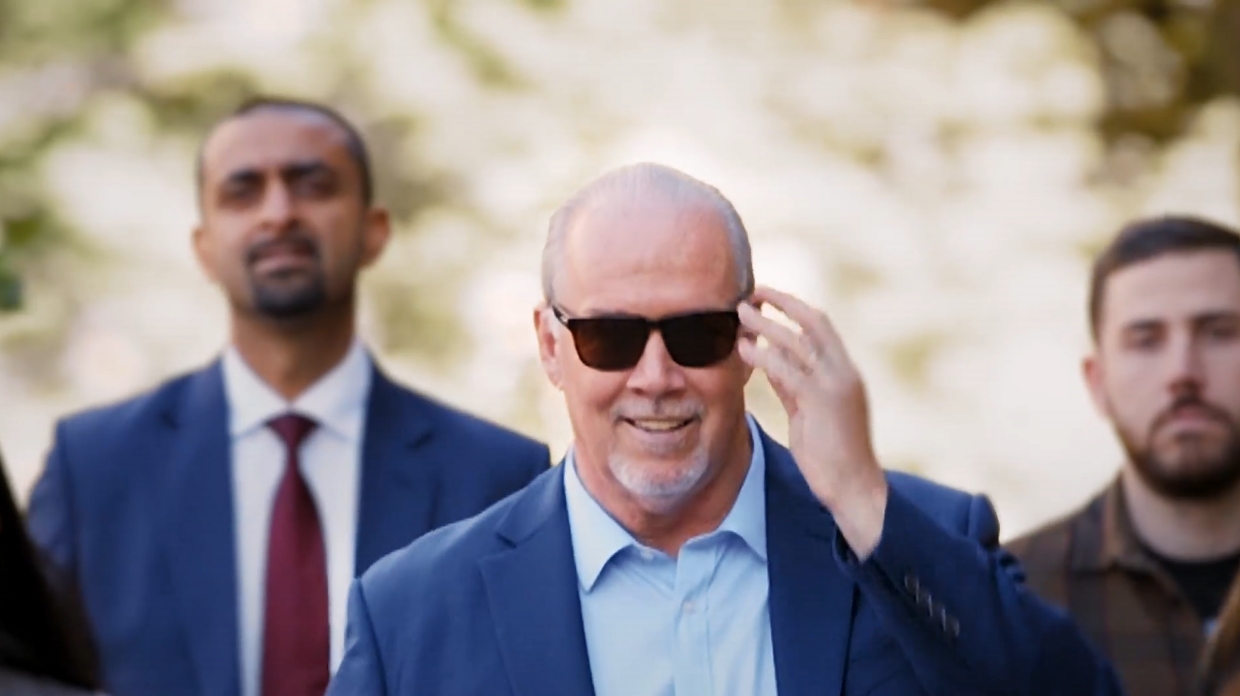 One incredibly important alternative Greens are championing is to finally get rid of rule by false majority. But in this case it's not just Greens. Dan Mangan is clear Pro Rep is where it's at. And last Tuesday we saw BC political history being made when John Horgan and Andrew Weaver spoke at a joint Pro Rep rally in Victoria. Then Premier John Horgan put out this fun video on Thursday and it's already received over 100,000 views. (I must admit I wasn't convinced he would go through with it but it seems that, unlike Trudeau, Premier Horgan is keeping his promise.)

On that same day Andrew Coyne spoke at a Vote PR BC event in Vancouver and you can watch his presentation here. BC has a real chance to be the first province to arrive at the promised land of electoral reform and he invites us to make it a reality. Likewise Gareth Hughes, Green Party MP in New Zealand, also wished us well when he spoke with Sonia Furstenau at our National Convention a month ago in Vancouver. 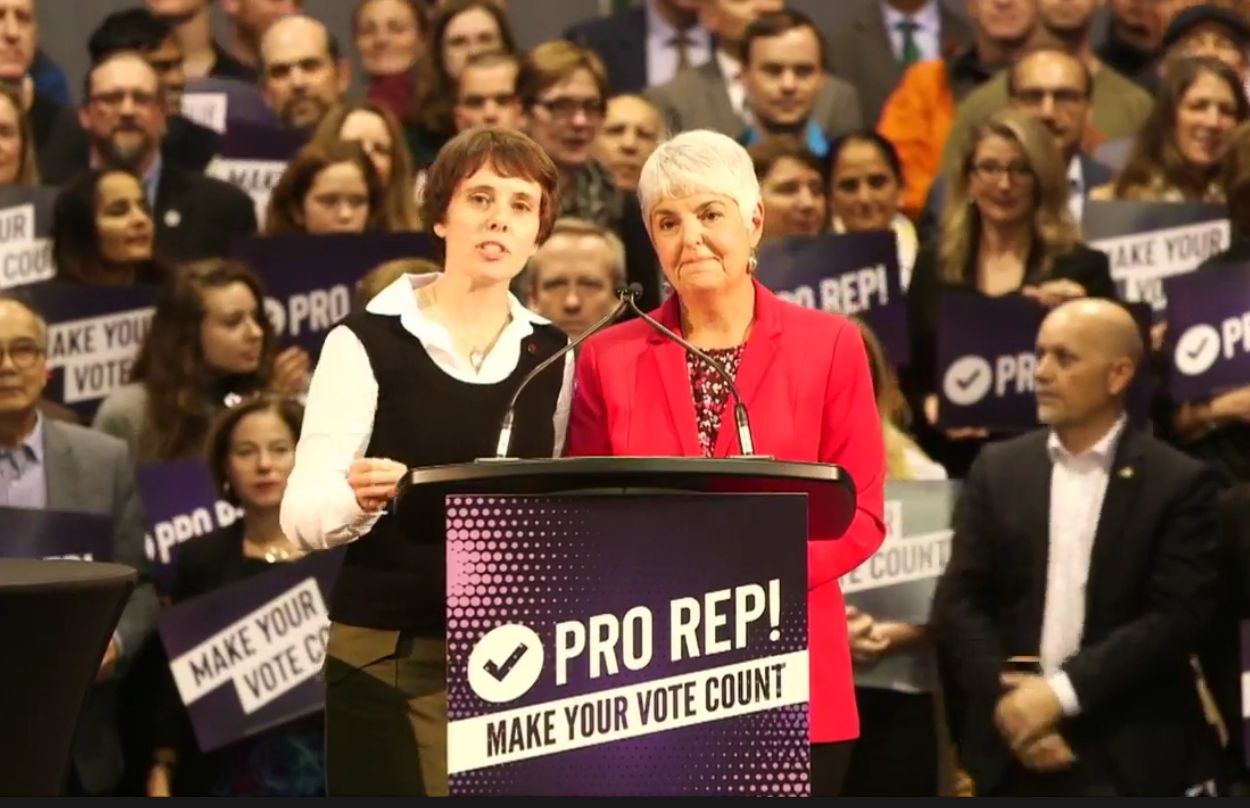 There are many good and detailed explanations on how the systems on the ballot work, and how other countries use them successfully. Here is one link to a page that lays it all out,  here is another, and here is an interactive survey to help you decide which system aligns best with your preferences.
Pro Rep is not a silver bullet. By itself, it won't fix our democracy and make politicians keep their promises. It will however ensure that our legislative bodies more accurately reflect the will of the people. That's important as we face the challenges of our time. Like the guy promoting Well Being Economics said, this has to become political.
So talk to your friends. Talk to your family. I'm reminded of what David Suzuki told Jo-Ann on her podcast. To make a difference, there are two people every young person needs to talk to. Two people who will probably listen. Two people who are worth persuading. Making our voices heard, that's what democracy is all about.
Until next week,
Thomas