The Special Committee on Electoral Reform finally began its important work at its first meeting June 21. The Liberals no longer have a majority on the committee, Ms. May is recognized as an equal voice and is clearly respected by her colleagues on the committee (see the first meeting video here).

Now Canada's hardest working MP, Elizabeth May, will be busy this summer helping to develop recommendations to strengthen Canadian democracy and ensure the composition of parliament reflects Canadian votes. In this recent CTV interview, Elizabeth discusses the importance of the Green Party of Canada to help parliament and why changing our electoral system will benefit us all. Stay tuned!

For more information on electoral reform, why it is so important and how virtually any version of proportional representation would be better than the first past the post system, visit the Fair Vote Canada website here.

Summer is here and the bounty of local food is marvellous. Ripe, sweet berries of all sorts, fresh vegetables, and luscious cherries abound. We are so fortunate in BC. We can produce over 250 foods and approximately half of what we need in the province, all from a relatively small amount of agricultural land. Yet as the global population grows and wildfires and drought in California and elsewhere affect food production, it is clear that we must become even more self-reliant.

With this in mind the deliberate loss of over 13,00 hectares (32,000 acres) of valuable farmland in the Peace River Valley is a questionable move. This is the area that will be flooded by the construction of Site C, the 3rd hydroelectric dam on the Peace River. The permanent flooding and erosion of arable land, a breadbasket that could grow enough to feed a million people, is a high price to pay for a megapower project that many question for many reasons.

The electricity is not needed. Electricity demand in BC is declining; we may never need the proposed extra 1,100-megawatts power. The power required for natural gas fracking in north eastern BC is not (hopefully!) going to increase. The economic rationale for aggressive development of this industry in BC has faltered with the global glut of natural gas. And more of us are questioning the logic of investing $9 to 12 billion of taxpayers’ money on a mega hydro project that will decrease our food security.

Head of the Union of BC Indian Chiefs, Grand Chief Stewart Phillip, stated it bluntly, "Site C is a make-work project intended to hide the failure of Premier Christy Clark's "pipe dream" of creating a liquefied natural gas industry".

The Green Party has long opposed Site C  for environmental reasons and to honour First Nations treaty rights. Please consider supporting groups with campaigns opposing the Site C dam, such as the Wilderness Committee and Leadnow.ca. 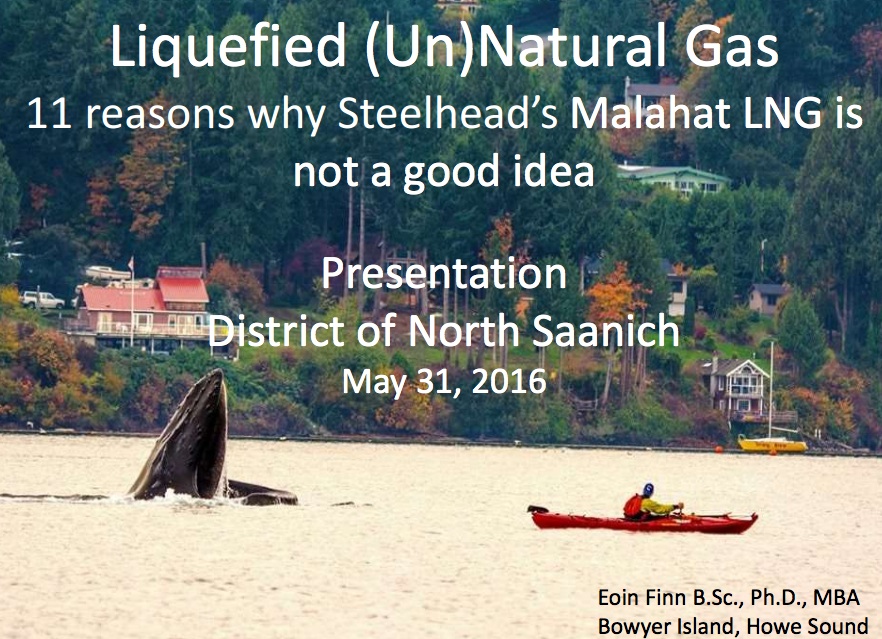 On May 31, over 600 people attended a public meeting in Sidney hosted by the District of North Saanich on the proposed Malahat/Steelhead LNG (liquefied natural gas) processing project. Audio recordings of the meeting and all presentations are available here.

The panel moderator did his best to ensure civility, but many attendees found the project proponents' information vague. Gordon Wilson's outbursts were disconcerting. In response to Dr. Finn's presentation, Mr. Wilson said that he has travelled to 35 communities in BC including 15 First Nations and "none of them believes what you just heard from Eoin Finn" and "it's not even good science fiction". He also stated that he "doesn't go as an advocate for LNG". Mr. Wilson has received an annual salary of $150,000 from BC taxpayers since 2013, a contract the provincial government has recently extended until 2018.

It was a very different atmosphere at the LNG town hall for constituents hosted several days later by Elizabeth May in the same venue. No security checks required, questions and comments welcomed. 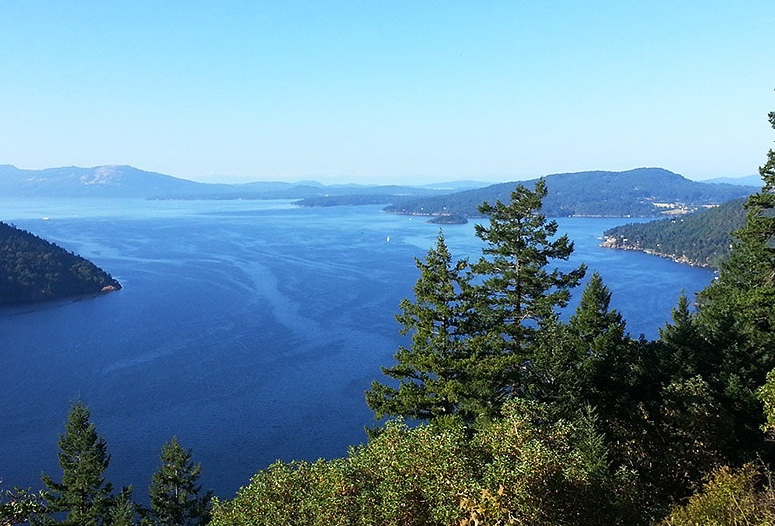 At this meeting, one audience member identified what may be the real reason for the Malahat/Steelhead LNG project - the opportunity for the US-based company Williams Companies to circumvent US regulators, who have denied all efforts to build LNG plants on their west coast. The Steelhead project would need an undersea pipeline from Cherry Point in Washington State to the Island to deliver the high volumes of natural gas for the energy-intensive liquefaction process (900 million cubic feet of natural gas per day).

The audience member pointed out that the proposed pipeline is actually an extension of Williams’ vast US network, plus their connection to the Spectre pipeline in BC. It would be hard to dictate to any company where to source their product, so the gas could just as easily come from Williams’ refineries in the fracking fields of the American Midwest.  Further, if regulatory approvals are obtained for this pipeline, any future attempts by BC or Canada to change regulations for LNG (since we have few) or restrict its export, could be challenged under NAFTA (or other investor-state protections).

Regardless of corporate motivations, any industrial development in the Saanich Inlet would be a foot in the door for more projects.

Saanich Gulf-Island residents can learn more about the hazards of LNG on the BC coast here. For specific information on the Steelhead/Malhat LNG proposal, see this blog and video by Adam Olsen, Deputy Leader of the BC Green Party.

To take action, join the second Paddle for the Saanich Inlet on July 9 (see Upcoming Events below). The event is to celebrate the beauty of the inlet and show solidarity with those opposed to the Steelhead LNG project.

The Saanich inlet Network is organizing another paddle to celebrate the Saanich Inlet and raise awareness of the proposed 6 million tonne LNG (liquefied natural gas) processing facility. For more information and to RSVP, please click here.