Elizabeth May & Friends 4th Anniversary Rally: The Time is Now 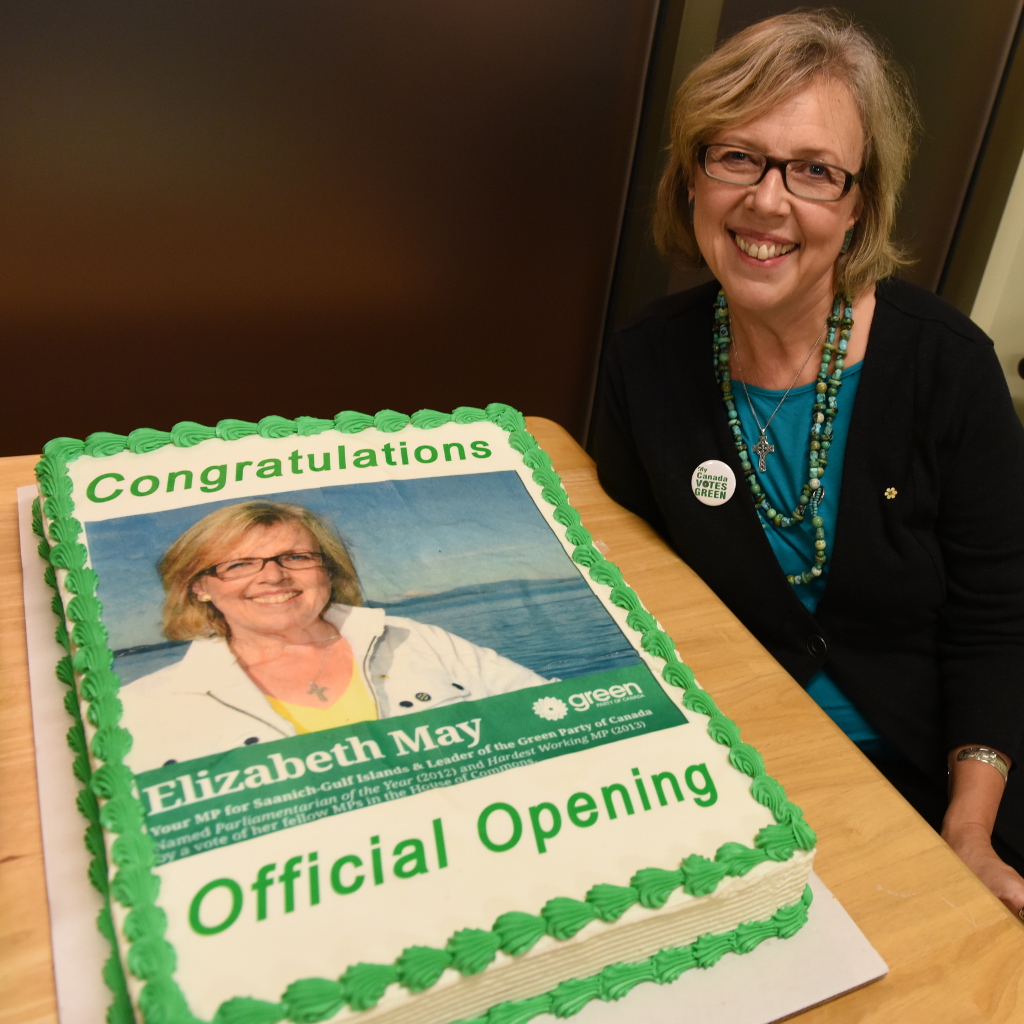 Join the crowds celebrating the 4th Anniversary of Elizabeth May's swearing in as the first elected Green Party member in the House of Commons. This is the official launch of Elizabeth's 2015 re-election campaign and a great opportunity to show your appreciation for Elizabeth. She has done so much in four years!

Come to learn more about Elizabeth's bold vision for Canada in the post-Harper era. 2015 is the year to restore our democracy – the time is now!

Speakers at the Rally include: Elizabeth May herself, Arthur Black, noted humourist and author, Frances Litman, Green Party candidate for Esquimalt-Saanich-Sooke; Andrew Weaver, the first elected Green Party MLA in Canada; Adam Olsen, member of the Tsartlip First Nation and Interim Leader of the Green Party of BC, and others.

Musicians from Salt Spring Island, North Saanich and Victoria and a special appearance by Bill Henderson of Chilliwack will give us more reasons for dancing. Locally produced food and refreshments will be on sale.

Let's send Elizabeth back to Ottawa with a full caucus of highly qualified Green Members of Parliament. Bring your chequebook!  And if you need further inspiration on just how critical the 2015 election is to our democracy and our planet, see our video compilation: Why Now? Because Canada Matters!

The Rally is free but space is limited. Please reserve your ticket now. 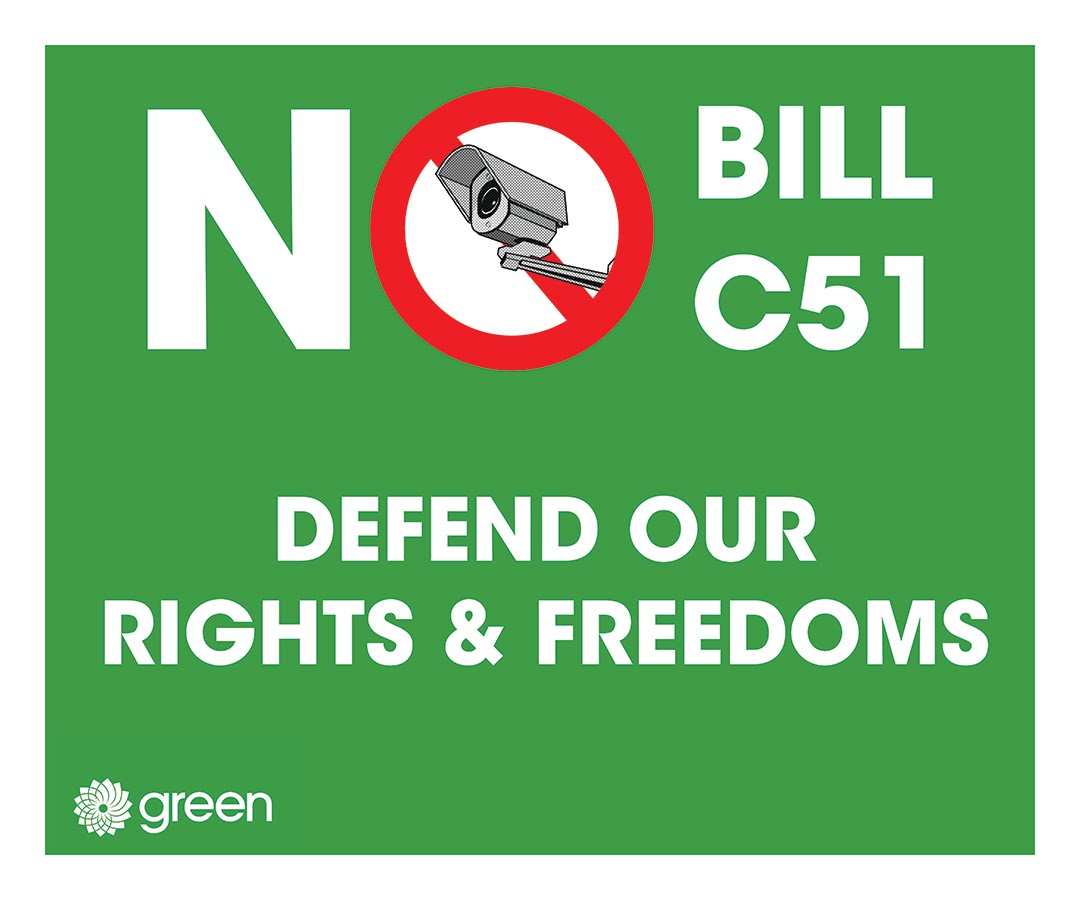 During Stephen Harper’s tenure as Prime Minister, the damage to Canada’s democracy is dramatic.

The now infamous Bill C-51, is just one example. It was rushed through parliament. The Report Stage was moved to Friday 24th April and, as intended by the Conservatives, few MPs attended. Elizabeth cancelled events in BC to be there for the debate. Elizabeth was the only federal party leader present!

Watch Elizabeth’s compelling speech in the House on just how dangerous the Bill C-51 legislation really is to our rights and freedoms.

The Harper administration is still ‘working on’ improved regulations for oil and gas sector greenhouse gas emissions, seven years after promising to do so, whereas the C-51 legislation that strips our democracy bare may become law in record time.

Elizabeth May sees the need to restore Canada’s democracy as not just one issue, but the key issue in the upcoming federal election.  We need committed representatives who will work to repeal Harper's anti-democratic legislation and replace the 'First Past the Post' system of voting with proportional representation that gives equal weight to all votes. We deserve much more than a ‘democracy theme park’ in Ottawa.

Canadians know that most MPs primarily represent their party and special interests. The consequences to our democracy are dramatic: prorogations of Parliament to protect Conservative rule, ever increasing control by the Prime Minister’s Office, omnibus bills that hide major legislative changes, ridiculous limits on debate, and tightly scripted non-answers given in Question Period and to media. Public servants are muzzled, civil society organizations are harassed, even voting is now more difficult — the list goes on.

Elizabeth repeatedly shows a better way, putting her constituents and Canada first.  In 2015, we must send Elizabeth back to Ottawa with a caucus of highly qualified Green MP that will restore Canada's democracy, reclaim the traditions of Parliament that allow government to govern on behalf of Canadians, support a strong, effective public service, independent research and regulatory oversight, and a robust civil society.

In the 2015 election, we can heal Canadian democracy.

Continued Green leadership by SGI voters is key. Help Elizabeth to restore our democracy. Pledge Your Vote. Donate your time volunteering for Elizabeth to support her re-election. Her voice is strong and clear but she needs our help, “making democracy work, is work.” 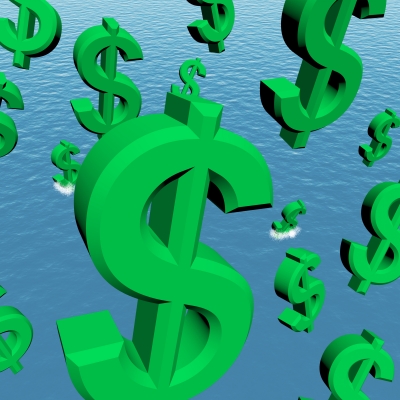 Reviews of the Harper 2015 budget are mostly critical. Only blatant accounting trickery enables the 2015 budget to be called 'balanced', as it:

* Uses $2 billion, that is two-thirds, of the Contingency Fund.

* Takes $3.4 billion from the continued overpayment of Employment Insurance premiums, breaking the late Jim Flaherty’s promise to never do so.

* Uses $2.7 to 3.2 billion from the fire sale of General Motors shares, at a multi-million dollar loss to taxpayers because of its timing.

* Delays proposed infrastructure improvements, such as rapid transit, to 2017.

There are more tax benefits for those who least need them, more money for war in the Middle East, and more announcements or repurposing of money already allocated. Perhaps the most egregious aspect of the Conservatives’ 2015 budget is that it assumes increasing oil prices, using more sleight of hand - a new forecasting approach.

What is missing from the budget is also problematic – no mention of climate change, only a pittance allocated to address the huge financial challenges for First Nations’ education, and no economic strategy to advance Canada beyond a resource-extraction economy.

And even the illusion of a balanced budget this year will not change the reality that the Harper administration's ‘fiscal conservatism’ has increased the Canadian national debt to over $600 billion.

Elizabeth May summarized the problems with Harper administration budgets in an article for Policy Magazine, “Under Stephen Harper a budget is a nearly incomprehensible amalgamation of promises and appearances of promises -- a hodgepodge of boutique tax cuts, nearly infinitely complicating the tax code, plus bribes of all kinds.” 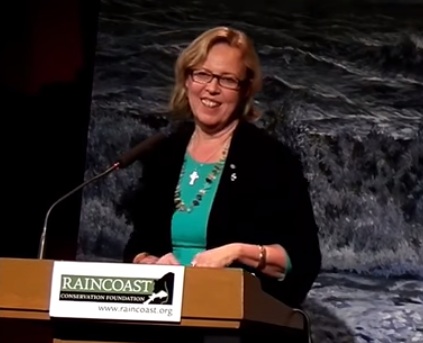 On Earth Day, Elizabeth May, and Green Party candidates Jo-Ann Roberts (for Victoria) and Fran Hunt-Jinnouchi (for Cowichan-Malahat-Langford) walked with hundreds of others in the Earth Walk for Peace and the Planet in Victoria. Elizabeth then joined the exuberant crowds at the 4th Annual Creatively United for the Planet in Esquimalt.

This was Elizabeth’s 45th Earth Day!

But she never stops working for us and for our planet. This Earth week:

* Two Green Party of Canada amendments to the Pipeline Safety Act were adopted. These recognize First Nations rights to sue for damages from pipeline spills and make it mandatory that the polluter pays for environmental damage.

Elizabeth’s keynote address at the Raincoast Conservation Foundation’s Celebrating the Salish Sea event challenged the National Energy Board approval process, bluntly calling it corrupt. Watch Elizabeth at her fiery best in her impassioned conclusion on a Green ‘Omnibus’ bill.

To make this positive vision our reality, donate to Elizabeth's re-election campaign now.

Discussion on the Future of Transportation, Thursday May 21st, Victoria at 6:30pm
Elizabeth May will participate in this town hall hosted by Frances Litman, Green Party of candidate for Esquimalt-Saanich-Sooke. Come and share your vision about ways to improve the movement of people and goods around Greater Victoria.
When:  6:30 pm
Where: North Douglas Church, 675 Jolly Place, Victoria

Bike to Work Week, May 25th-31st, BC
To find out how you can get involved, visit BiketoWork.ca or contact Jan Slakov, coordinator on Salt Spring Island at [email protected] or (250) 537-5251.

David Suzuki Book Launch - Letters to My Grandchildren, Saturday May 30th, Sidney at 2 pm
David Suzuki launches his new book, draws on the experiences and wisdom he has gained over his long life and offers advice, stories, and inspiration to his six grandchildren. Presented by Tanner’s Books. Tickets are $12.

Town Halls with Elizabeth May  - June 12th to July 14th, across Saanich-Gulf Islands
Canada’s hardest working MP continues to reach out and listen to her constituents. See Elizabeth’s schedule for a Town Hall near you.

Come join the excitement - be part of the wave!
Canvass with us to build the community! Volunteer - Vote - Victory!