To ensure you continue receiving the Saanich-Gulf Island Newsletters, please add us [email protected] to your address book. 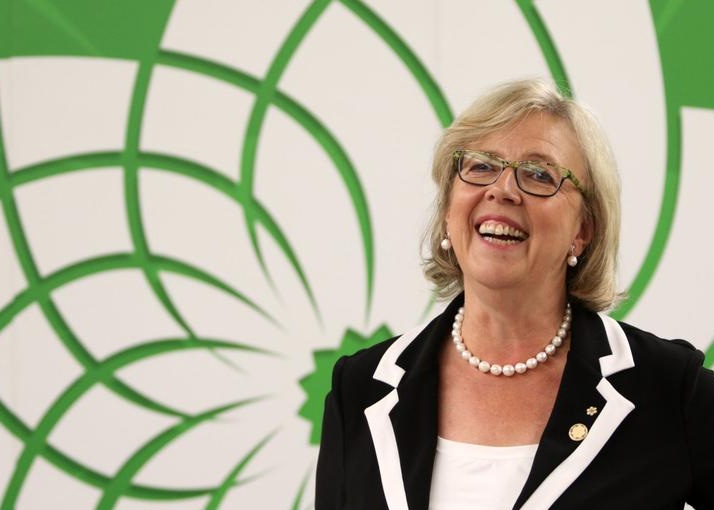 Despite many petitions, letters to the editor, and multiple polls that demonstrate that a majority of Canadians want to hear Elizabeth's perspectives, the Globe and Mail refused to invite Elizabeth May to the debate Thursday in Calgary.

Recognizing that Elizabeth has much to contribute to a debate on the economy, Twitter Canada helped Elizabeth attend virtually. Elizabeth pointed out that live tweeting her responses is “the best we can do, but it’s far from being a fair debate.”

Elizabeth live tweeted her answers and, in brief Twitter video snapshots, she posted responses and commentary on what wasn't being said. For example, her fact check on Stephen Harper's comment that Canada is investing heavily in green technology was clear - it's simply not true. Her closing remarks were a succinct description of the many important economic challenges that were missed in the debate such as pay inequality for women and the poverty of many First Nations.

See the Green platform on a sustainable economy here.

There was a full house at the viewing party in Victoria, watching the debate in Calgary on one screen and Elizabeth's responses on another. Many more people watched via a live Twitter video feed - with over 1.7 million Twitter impressions and 14,000 retweets of her comments. 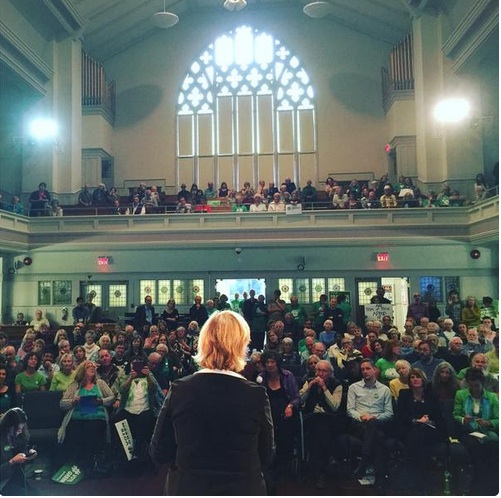 A sample  of the deluge of commentary online, "So the good old boys club strikes again, they have actually shot themselves in the foot by not including the only woman candidate running because it appears they do not want the women's vote,....big mistake, huge....".

Media outlets were astonished with her contribution and commented that she "dominated the debate".

This successful social media work-around shows how people power can stop Stephen Harper from rigging the game. He continues to try to control all messages - the audience, social media, the questions at his own campaign events, and even telling Conservative candidates to avoid all candidates meetings. This will not stop Canadians from getting the information they seek for an informed vote in 2015.

Elizabeth stated, “Canadians rejected Stephen Harper’s bogus corporate debate strategy. Debates are about Canadians. It’s not about me, the Green Party, or Harper’s strategy. Canadians deserve the opportunity to hear from all party leaders. It is critical that the English National Television Broadcasters’ Debate on October 8 goes forward as planned."

Many Canadians are urging Thomas Mulcair to re-commit to attending the National Broadcasters' English debate, so the majority of Canadians can watch their leaders’ discuss issues that affect them. It is an important part of the election process in a democracy.

Please participate as you can to discuss the issues that matter most to you by phone, commenting online, signing petitions and on social media. Without the Twitter debate success, the media would have only discussed the three leaders and not Elizabeth or the Green Party. 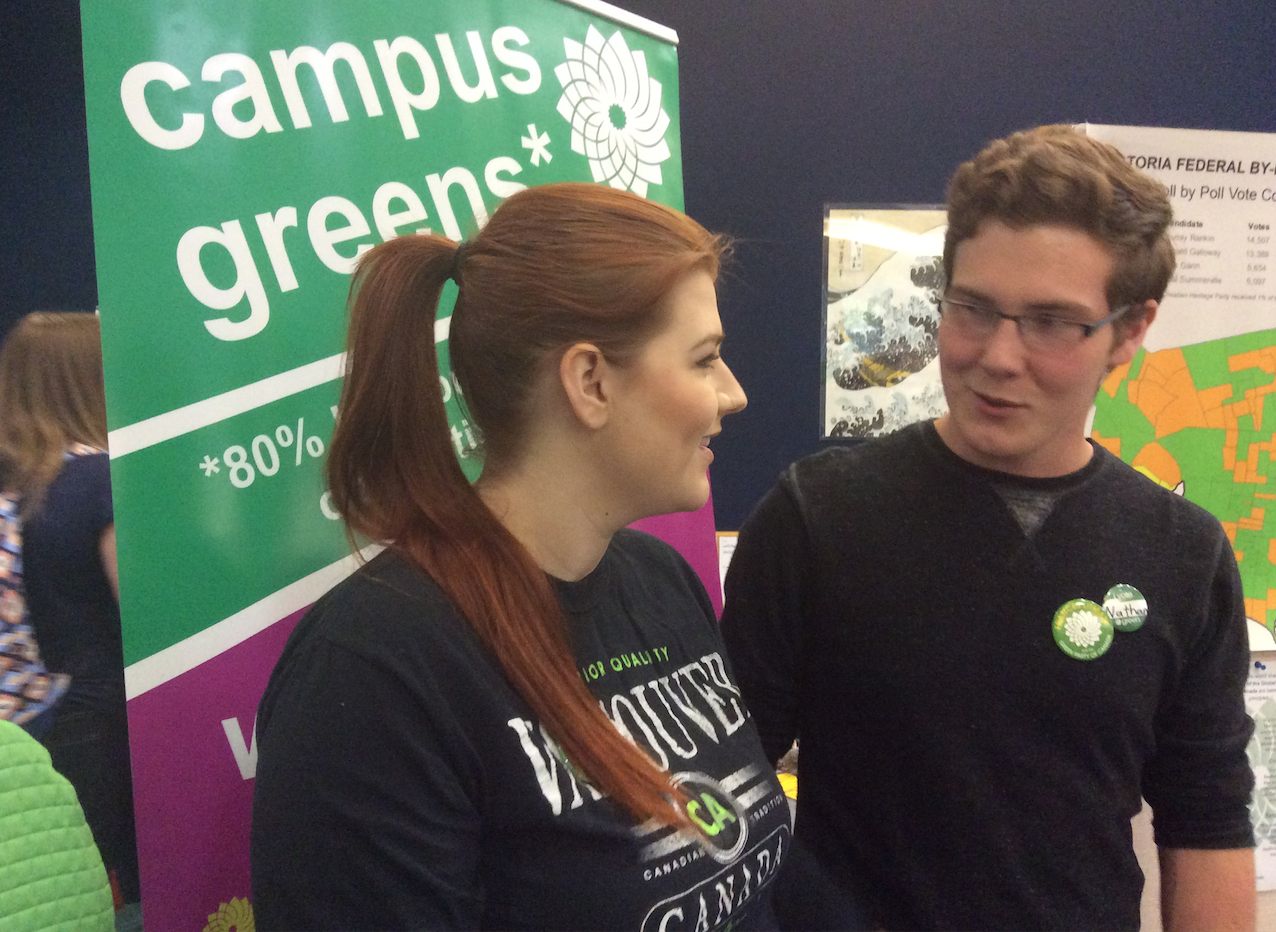 The Green Party of Canada was the first federal party to release a full election platform with the goal of Building a Canada That Works. Together. The ideas are bold, visionary and fully costed.

The Green Party's approach to fostering the success of Canadian youth is to invest in young people. We can build the Canada we want by:

Abolishing tuition fees for college, university and skills training over the next five years. Expansion of public education system to include post-secondary education increases prosperity, equality, productivity, and economic competitiveness.The proposed Guaranteed Livable Income will also give students the financial security needed to pursue an education.

Addressing youth unemployment. Youth unemployment is twice the national average. The Green Party vision is to create a national Community and Environment Service Corps. This will provide $1 billion/year to municipalities to hire Canadian youth to do work that needs to be done. This improves communities and provides valuable work experience.

Investing in sustainable jobs. We need innovative jobs to replace those that are disappearing in the resource extraction. The Green Party wants to help Canada move to a 21st century knowledge-based economy that adds value to our resources before they are exported. Elizabeth says, “Canada has the potential to capitalize on the single-biggest business opportunity in human history — the shift to a green economy through cleantech and green infrastructure investments”.

Canada's success depends on an educated, employed population. The problems with student debt, high levels of youth unemployment and underemployment affect all Canadians. We can do better. Join us by supporting the progressive, visionary ideas of the Green Party. Volunteer for Elizabeth's campaign or your local Green candidate.

Supporting Canadian Democracy - Check That You Are Registered to Vote 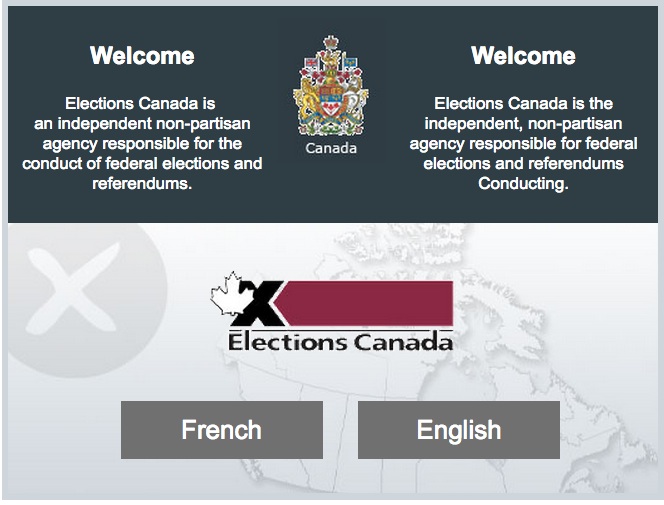 Please share our newsletter with your friends and colleagues and remember to vote, the most important act every Canadian of voting age can do to support democracy. Voting has been made more difficult, so we urge you to please check the Elections Canada website here to ensure that you are registered to vote.  Please consider pledging your vote to Elizabeth.

Examples of the added challenges voters may face:
*  After living in the same location for over 40 years and voting in every federal election, a resident of Salt Spring Island was shocked to discover that she was no longer on the voters list.
*  Couples in Saanich Gulf-Islands have been surprised to discover one spouse, was registered but their partner was not.

You can vote now at an Elections Canada office near you. In Saanich-Gulf Islands, the office is at 1851 Keating Cross Road, Suite 102, Saanichton, BC. See a map here.

The Federal Election Advance Polls are October 9, 10, 11, 12, from noon to 8 pm. Please contact one of the SGI offices, or email us for more information.

Hundreds of volunteers are needed for the Advanced Polls and Election Day - to scrutineer during voting, scrutineer the vote count, and help with data entry, and phone calling.  Please sign up here.

The list of all candidate events is becoming really long, so please click here for current information on local meetings.