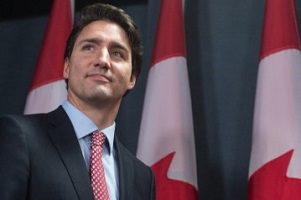 May: It's Trudeau's moment to act on climate change

So much carbon; so little time. It is true globally and it is true for Canada.

From Canada’s early entry as a climate action leader – hosting the world’s first international scientific climate conference in 1988 – until today, most governments have played for time. Stalling tactics and procrastination, two steps forward and one step back, have typified climate strategies. True, most countries in the European Union have met and exceeded their Kyoto targets. But Kyoto targets were understood at the time, back in 1997, to be only a down payment on future action. And shamefully for the last 10 years, Canada has provided cover for other countries to do less, knowing that its aggressive sabotage would excuse its own shrinking ambitions.

That can change on March 3, when Prime Minister Justin Trudeau sits down with the First Ministers to talk about climate change.
Federal leadership is needed. Provinces refusing to do more should meet generous willingness from other governments to take up their slack. Canada will be expected to sign the Paris Agreement at a high-level signing ceremony on April 22, Earth Day. We must not show up with the weakest G7 target, the one left behind by the Conservatives. Time is running out for climate action and for Liberal promises.

By tweeting this page, you are asking Justin Trudeau and his Cabinet to get behind the Agreement on Earth Day.