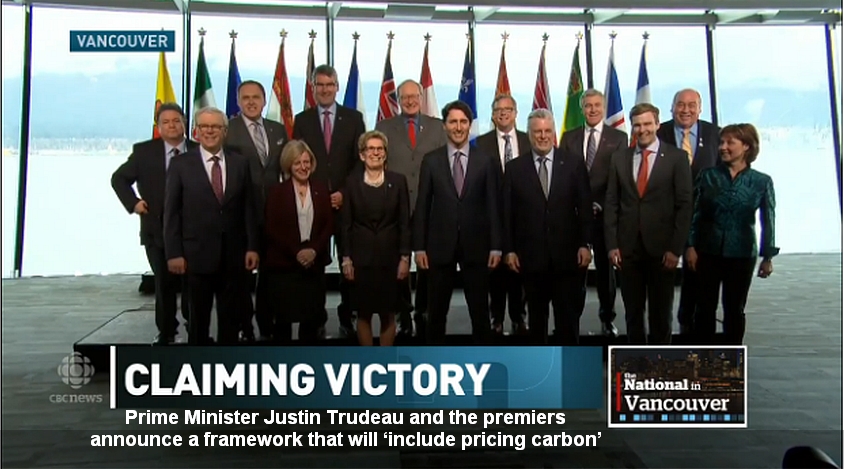 “I congratulate the Premiers and Prime Minister Justin Trudeau on making progress towards a pan-Canadian framework for clean growth and climate action. However, I believe Canada can still achieve stronger greenhouse gas (GHG) emissions targets before we sign the Paris Agreement on April 22,” said Elizabeth May, Leader of the Green Party of Canada (MP, Saanich-Gulf Islands).

To avoid a global temperature rise of more than 1.5 degrees C, Canada will need to improve upon our current GHG target of 30 percent below 2005 levels by 2030 – the weakest target in the G7, Ms. May said.

“As Environment Minister Catherine McKenna has stated, our current target is ‘the floor.’ We need an improved target now so that Canada can walk the talk on its new-found ambition and push other countries to do more on climate action,” Ms. May said.

Bruce Hyer, Green Party Deputy Leader and Climate Critic, said a First Ministers meeting is an improvement over the Harper era, but it is no substitute for a national strategy that includes a price on carbon.

“We need real leadership now, not in six months,” Hyer said. “The Green Party will continue to advocate for the Carbon Fee & Dividend model, introduced by NASA’s climate guru, James Hansen, and promoted in Canada by the Citizens Climate Lobby. Rather than Cap & Trade or another carbon tax, Carbon Fee & Dividend returns every penny of carbon fees directly to every Canadian on an equal per-capita basis, and in a totally revenue-neutral manner. The larger the dividends, the faster it reduces both CO2 and poverty. Let’s get a real plan for future generations now.”

Reach out to the Premiers and the Prime Minister directly by tweeting this page. For a complete list of First Ministers and their Environment Ministers click here