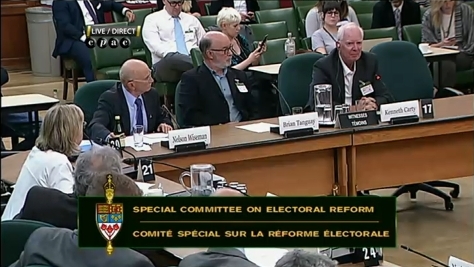 A trio of academics testify as individuals:

Carty, a professor emeritus of political science at the University of British Columbia, was director of research for the B.C. Citizens’ Assembly on Electoral Reform in 2003-2004. He has also served on the province’s electoral boundaries commission and written on Canadian political parties and electoral politics in Ireland. He also consulted for citizens’ assemblies in Ontario and the Netherlands.

Tanguay is a political science professor at Wilfrid Laurier University with a focus on electoral systems and reform. He was the lead author of the Law Commission of Canada’s 2004 report calling for a Scottish-style mixed-member proportional (MMP) system for the House of Commons. Tanguay has been a local executive member for Fair Vote Canada, which supports proportional representation.

Tanguay told The Globe and Mail in April that the clock was ticking on the government’s 18-month promise for a reform bill.

Wiseman teaches at the University of Toronto and is often referred to for comment on elections, voting, and political parties. Wiseman told the Toronto Star last year that the government doesn’t need a referendum to enact change.