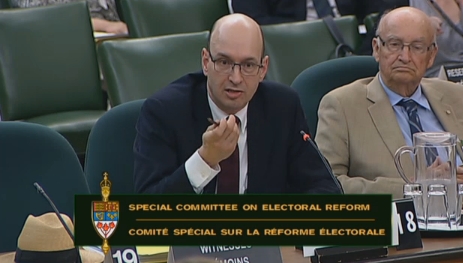 Dutil, a Ryerson University professor of politics and public administration, wrote a Toronto Star op-ed last December that accused the government of “unprecedented arrogance” in promoting voting reform without the promise of a referendum.

Russell is professor emeritus at the University of Toronto and well-known expert on parliamentary and constitutional issues. He has supported Fair Vote Canada and the mixed-member proportional (MMP) system. Russell authored an open letter, signed by more than 500 Canadian academics last fall:

Canada is facing a significant democratic deficit, illustrated by low voter turnout, unresponsive majority governments elected with far less than 50% of the vote, half of all votes electing no-one, superficial partisan posturing, and most disturbing, a growing majority of younger Canadians who see little value in voting or engaging in electoral politics.

As academics at Canadian universities and colleges across the country, we believe Canada can no longer afford to ignore the urgent need for electoral reform. We need an inclusive and functioning representative democracy based on a fair and proportional voting system.

As the 2015 federal election approaches, we urge the parties to include in their platforms a commitment to conducting a process that would bring together citizens and experts to design a proportional model for Canada immediately following the election, and to implement the model in time for the following election.