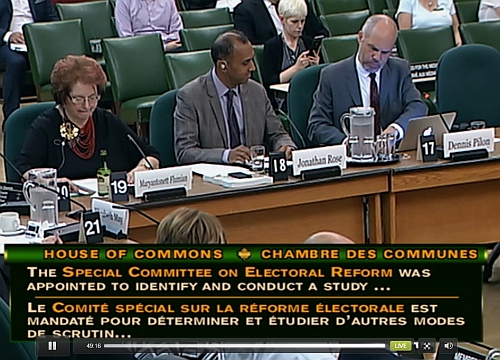 Last panel of the week. The most exciting discussion to date!

From tweets: "Best panel yet!", "Exciting discussion...!", "Pilon is knocking it out of the park...!", "#ERRE Meeting number 12 today was, IMHO, the most lively and interesting: worth saving & re-watching..."

Pilon, who teaches at York University, wrote in February that Parliament was empowered to change the electoral process without a constitutional amendment. He has written extensively on Canada’s voting system and worked with Fair Vote Canada on proportional representation.

Rose, a Queen’s University political scientist, served as academic director of the Ontario Citizens’ Assembly on Electoral Reform in 2006-07. He has called for a similar body to examine federal reform.

Flumian is president of the Institute on Governance.