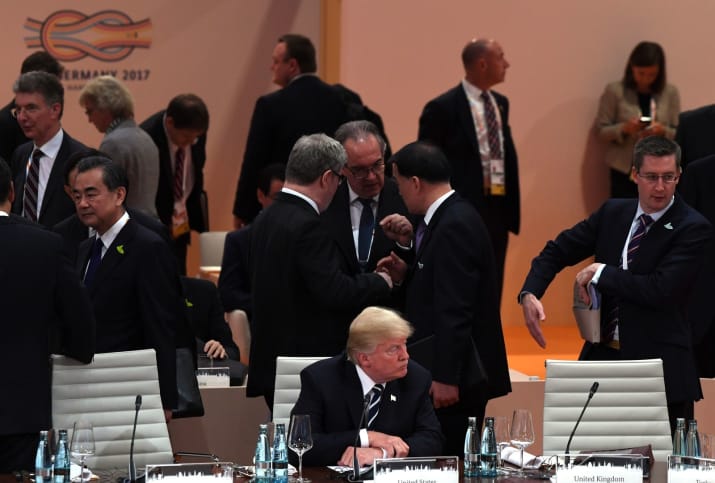 The G-20 represents more than 80% of global growth, more than 80% of global emissions and more than 80% of our resource consumption. And when they met this week to talk about global issues, the main topic of conversation was climate change. German Chancellor Angela Merkel called climate and energy "the one crucial issue" at the G20 and spoke of her frustration at the US choosing to leave the Paris accord. "You are familiar with the American position, you know that unfortunately, and I deplore this, the United States of America left the climate agreement," said Merkel. "But I am very gratified to note that the other 19 member states of the G20 say that the Paris agreement is irreversible." Nineteen of the twenty leaders made it clear that they are moving forward to embrace a low carbon future with or without Donald Trump.

To help them do that, the G20 came up with a new approach known as the T20. Céline Bak, a senior fellow with the Centre for International Governance Innovation, is part of that task-force of leading think tanks. She is working with members of Group of Twenty countries to harness large scale investment in sustainable infrastructure and chart a path towards a low carbon economy. Their aim is to move beyond the lowest common denominator, that so often results after lobbyists chip away at the bold actions promised by politicians, and advocate for serious action on major issues affecting our society.

In this week's edition of CBC's The House, Céline Bak follows Catherine McKenna in Talking Paris in Hamburg: "The Brookings Institute came up with a study that we're going to need to invest between 5 and 7 trillion dollars every year for the next 13 years in order to provide the energy and infrastructure foundations that we're going to need to decarbonize the economy. That's a huge economic opportunity." It used to be that the White House lead the charge to take advantage of this opportunity by opposing the Keystone XL pipeline for example.

Now, instead of joining the world in it's determination to get serious about addressing the globing catastrophe of breaching our carbon budget, the United States has officially decided to turn it's back on future generations. "The times when we could completely count on others are, to a certain extent, over." Angela Merkel said leading up to this summit. "And that is why I can only say that we Europeans must really take our fate into our own hands." 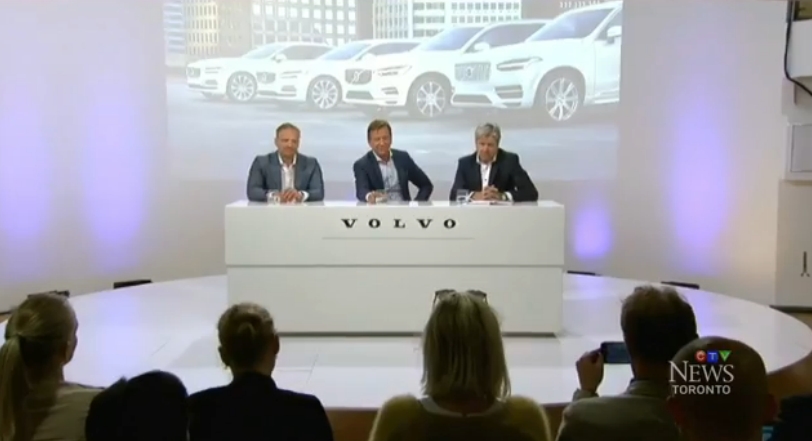 Many states, cities and large corporations in the US seem to feel the same way, as they forge ahead with local and state wide climate action. It's not just Tesla that is leading. The fastest growing job in the US right now is wind turbine technician. And Volvo has just announced that as of 2019, all it's cars will be electrified, offering either hybrid or full electric options. Like other manufacturers that have taken on the challenge represented by Germany's target date, it will eliminate the internal combustion engine entirely by 2025. Under the direction of its Chinese owner, Geely Auto, Volvo is responding to customer demand and has decided that the future is electric. "The change is happening faster than even insiders had thought."

As if to underscore that point, China just switched on the world's largest floating solar power plant. The facility has a capacity of 40 megawatts (MW), enough to power a small town. And in a stroke of pleasing symbolism, the plant floats over a flooded former coal-mining region. It wasn’t too long ago that China had a reputation as a coal-guzzling, smog-blanketed polluter. But that is changing - and fast. Today, China invests more each year in wind, hydro and solar power than any other country on earth, reports this piece from the World Economic Forum: "China and the EU have issued a joint statement reaffirming their commitment to the Paris Agreement and announcing their intention to ramp up efforts on reducing global carbon emissions. Without the US in the accord, it will leave a superpower-shaped hole in global climate-change leadership - one that China seems willing and able to fill." 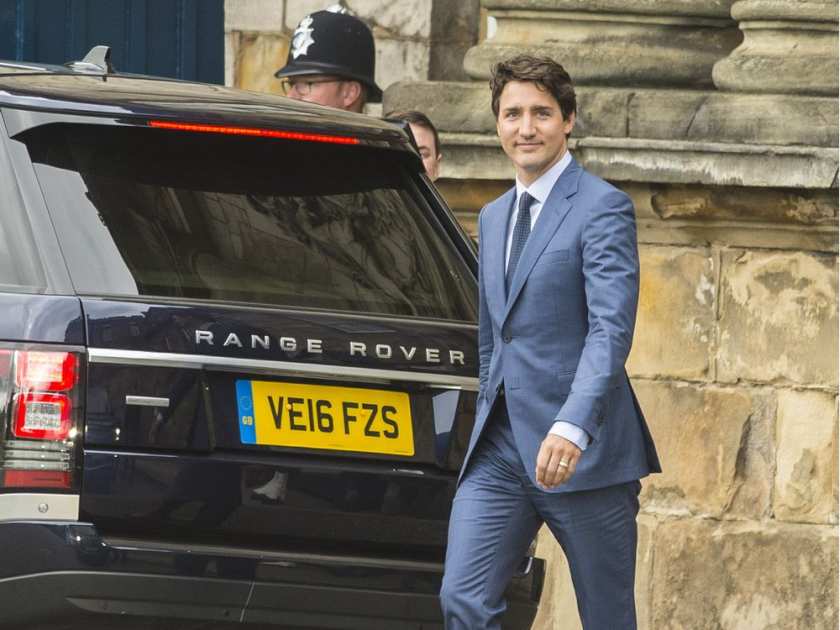 Meanwhile Trudeau is trying to walk the fence between Trump's intransigence and the momentum building around the globe. "In comparing Trudeau’s support for the Paris Agreement to the Trump administration’s “exit” from the Paris Agreement, it is possible to associate the word “leadership” with Canada’s climate policies," writes Elizabeth in this oped published just before the G20 meeting. "However, it is only in comparison with Trump that our policies look at all progressive. In fact, Trudeau will need to commit to far more than anything currently planned domestically for Canada to hold its head high in the company of the European nations, or even China."

"Some of the world’s leading thinkers, policymakers, business leaders and scientists have outlined what is required to fend off catastrophic climate change," Elizabeth writes in her oped. “Three years to safeguard our climate was published in Nature on June 27, 2017. It was co-signed by dozens of experts, notably Christina Figueres, former head of the UN climate secretariat, and received prominent coverage in The Guardian, TIME magazine and outlets around the world. I did not see any coverage in Canada, but that is perhaps because among the dozens of signatories, none was Canadian. Nevertheless, every Canadian should read this call to action and explanation of why we only have until 2020 to put the planet on track to meet the Paris targets." 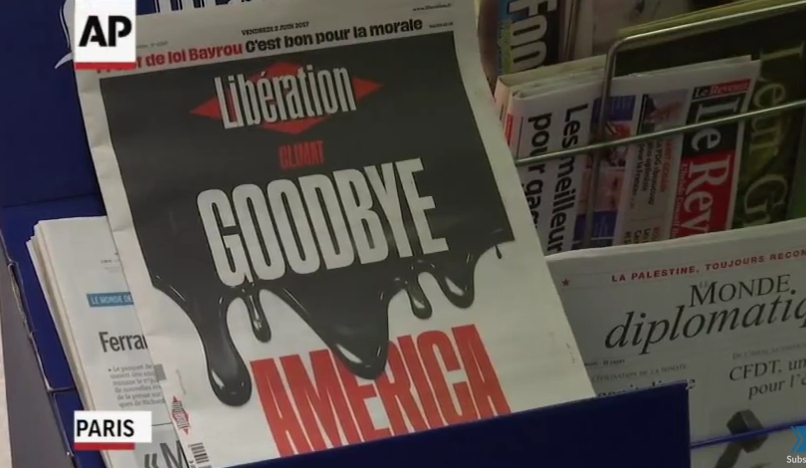 There is no doubt that our economy has strong ties with the US. But limiting our participation in this global energy revolution to appease the current occupant of the White House, only means that we will follow Trump down the drain to irrelevancy. “The green transition is happening,” says Katherine Richardson, head of the Sustainability Science Centre at the University of Copenhagen, “and it’s so underway that one person, even if he is the President of the United States, is not going to be able to stop it.”

There are opportunities for Canada as Elizabeth points out again and again. This week while flipping pancakes at the Calgary Stampede, she did an interview with Danielle Smith, the former leader of the Wild Rose party turned radio host. What was most interesting to me was how much airtime Elizabeth was given and the appreciation that was expressed for her quintessentially nuanced position at the end of the interview. "The argument isn't about pipelines, its about what's in the pipelines."

It's irresponsible to bury our collective head in the (tar) sand. Opportunity is knocking and Prime Minister Justin Trudeau needs to stop walking the fence and start walking the talk of Climate Action. Playing the role of quiet diplomat is typically Canadian but we have to stay on track and within our global carbon budget. Investing in new carbon infrastructure to transport Dilbit, the dirtiest oil on the planet, is not going to get us there. 1.5 to stay alive: If Trudeau wants to maintain credibility at home and abroad he needs to be bold enough make sure that as a country we do what we say and say what we do.

You can help him do that. Add your voice to the conversation. Write letters to your local paper or the Prime Minister himself. Or simply tweet this Good Sunday Morning to @justintrudeau by going to the web version here and clicking on the tweet button.