They're going to keep what Harper did!

It almost feels like "take out the trash day" on that West Wing TV episode. You make it appear as if you are doing a lot of good stuff and then when no one is paying attention you sneak through something you know could really hurt you politically. This is the time of the year in Canada when few people pay attention to politics. And so, here we are facing an August 28th deadline for public submission on a critical issue. 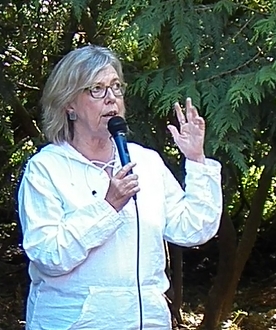 "Apoplectic is how I get when I look at [what] was just put out on a web site at the end of June from the Government of Canada. Basically taking you back to bill C-38 and C-45, the 2012 Omnibus Budget Bills that wrecked the fisheries act, the navigable waters protection act, the environmental assessment act and changed the NEB's role", Elizabeth explained at our annual Green Party Summer Picnic here in Saanich-Gulf Islands. The Liberals promised to address these travesties and launched four different consultation exercises: One under the transport committee to look at the Navigable Waters Protection Act, one under the fisheries committee to look at the Fisheries Act, and two really expensive high level expert panels.

One of these traveled across Canada and had thousands of people participating on Environmental Assessment. It was chaired by Canada's former commissioner for environmental and sustainable development. The other panel, which performed an in-depth review of the National Energy Board (NEB), included the former president and CEO of the Canadian Energy Pipeline Association (CEPA), as well as other well qualified individuals. They provided a fantastic report that said the National Energy Board has no credibility, it should be renamed the Canadian Energy Transmission Commission and it should not be located in Calgary.

This report was entitled "FORWARD, TOGETHER – Enabling Canada’s Clean, Safe, and Secure Energy Future" and here is an excerpt: 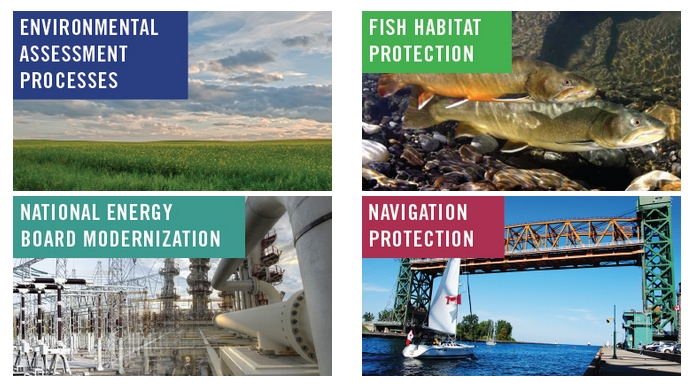 1.1 Aligning With a Clear Canadian Energy Policy
Canadians across the spectrum, from industry representatives to Environmental Non-Governmental Organizations told us that Canada’s energy infrastructure regulator must operate within the context of a clearly defined, comprehensive national energy policy which defines our energy strategy and reconciles economic and social goals with environmental commitments. We heard that today the process for major project approvals is deeply compromised by the fact that stakeholders with legitimate opposing viewpoints find themselves debating national policy questions in the context of regulatory hearings. These hearings do not and cannot provide satisfactory outcomes for groups wishing to have input into higher-level policy, and as a result the integrity of and trust in the regulatory system suffers greatly at the very outset. It is important to note that this is a concern expressed by a range of players including environmental groups and industry. The current system is frustrating for everyone

After these reports were written, they were put out on the government web site for more consultation and then... "They took all of that, and put out something that retreats from all the good things," Elizabeth summarized. "After all the expert panels told them that the NEB should not do environmental assessments, they're saying the NEB is going to do environmental assessments... And the Navigable Waters Protection Act, they're going to keep what Harper did."

The report that ignores all that consultation has lots of pretty pictures and headings like "Call to action" but it sticks with its number one principle that "No project proponent will be asked to return to the starting line", no matter how broken the process was or how destructive the results of this broken process. It's like finding that someone was wrongfully convicted and because it's too expensive we refuse to reopen his trial. This document seems to be designed to serve the industry, not the public: "One project – One assessment. Our approach remains committed to building on what is working well, while seeking to attract and grow investment." Guess a slate of experts and thousands of submissions telling them the system is broken wasn't enough to overcome the pressures of lobbyists.

What strategic voters in the last election failed to recognize is that unless a government, and in our current context that translates to a political party's ideology, is firmly rooted in a paradigm that puts the public interest first, the lobbyists will be all too happy to persuade them that the "advice" they gave the previous government is still sound and valid if they want to remain in power. Stephen Harper riled against omnibus bills back in the mid '90s, only to make them his hallmark once he led a 'majority' government. Justin Trudeau once knew to ask his father "You want to do something that's the right thing and banks and big business push back at you, and they don't want you to do it. How do you deal with those kinds of pressures?" only to succumb to the political strategies of the power brokers now that he himself is the Prime Minister. 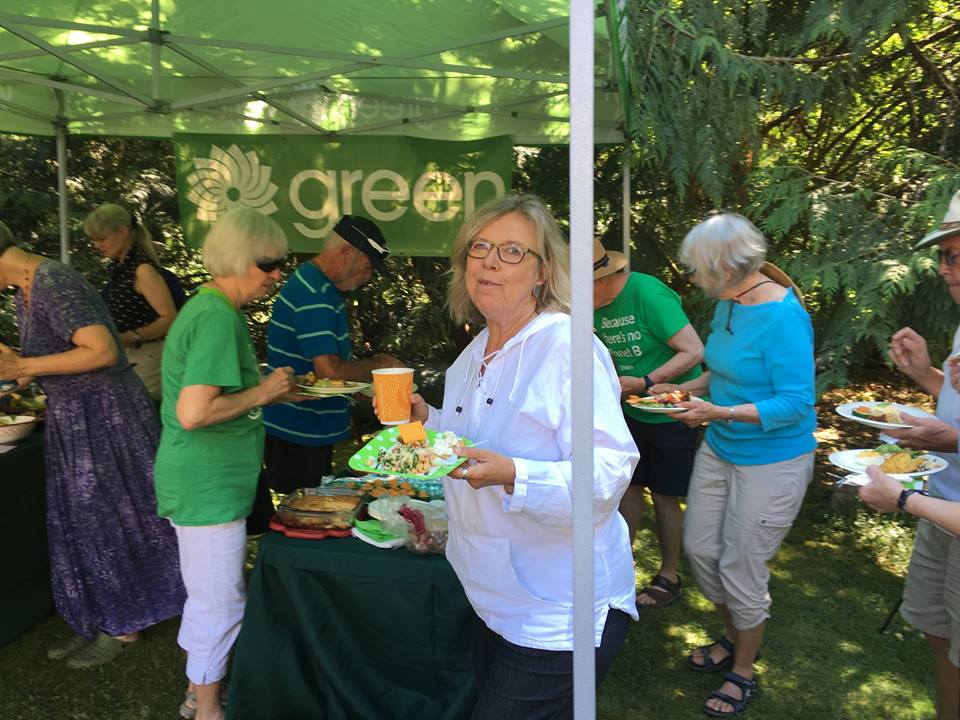 It's a perennial challenge and it is why so many of us find sanctuary and purpose within our Green family. In attendance at this year's summer picnic were members of our SGI Green Media Group, our very active and effective Events Team, our newly elected Executive Committee and some volunteers at large that quietly support the work of our Electoral District Association. It's the one time of year when all of these very active Green citizens unite in a relaxed outdoor setting to share stories of their adventures and compare notes.

After Elizabeth spoke, we passed the mic around so we could make sure everyone knew everyone. One of the last speakers that took the mic reflected on a phrase that he attributed to Elizabeth with a sense of deep appreciation: "It's our job to rescue democracy from politics." That's why we are compelled to stay active between elections and why at this halfway mark between the 2015 and 2019 elections, our little EDA isn't so little. We have actively shifted our focus towards community service, providing folks the opportunity to unite in their efforts to build a better world.

By promoting a broader understanding of the economic opportunities of a stable and prosperous low carbon future, by teasing out the embedded flaws of our trade deals and exposing the perils of Investor State Dispute Settlement provisions, by championing the benefits of a fair and inclusive environmental and economic review process that puts people and our ecosphere first, and by preparing for the technological convergence that is going to change our world, we seek to empower the voices of Canadians. If you live in the riding of Saanich-Gulf Islands, we invite you to join our Events Team, our Green Media Group or our GreenWriters by replying to this email. If you are one of our many readers across Canada, you can still join our GreenWriters and we also encourage you to actively participate by supporting your local Green Party EDA.

We expect to hear more from Elizabeth about this Review of Environmental and Regulatory Processes when we receive this summer's householder in the mail next month. But in the meantime you can log in and familiarize yourself with their input site. You can also review some of the information on our YouTube channel that explores just how broken the NEB is. Then you can make your voices heard on-line and in social media. The NEB was never designed to do environmental assessments. There needs to be an arms length regulator to protect the public interest. It's the only way the review process (and the Trudeau administration) can regain its credibility.