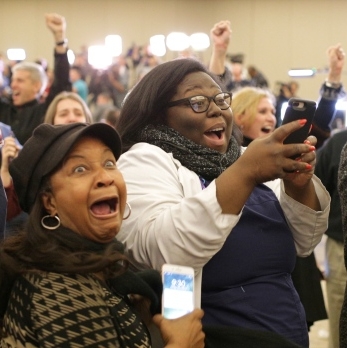 It's pretty exciting when you achieve what is widely accepted as impossible. Electing a Democrat as Senator in Alabama has these folks stunned with elation. We know what that feels like. It happened to us when we elected the first Green MP in Canada. It happened again with every other "First Green..." in BC, New Brunswick and PEI. Peter Bevan-Baker put it best when he said, "If you work hard and stick to your principles, the almost impossible becomes almost inevitable."

Last May we felt the excitement of electing the first Green caucus. We supported candidates that personified our values, that showed integrity and a deep commitment to our community. They put responsible government ahead of political gain and were dedicated to finding the best solutions to the complex challenges of our time. But once the euphoria of election night met the dawn of the next day, most of us felt relieved that the election was over. We were exhausted. We could go back to our daily routine with the comfort that we had elected good people to represent us.

This week we were jarred out of our complacency by an announcement that took many by surprise. As recently as November 4th, at the NDP convention in Victoria, John Horgan seemed prepared to do the right thing and cancel Site C: "The new revelations about more geotechnical problems make it increasingly difficult to look at this project as one that will be in the best interests of British Columbia." However, this article in the Globe and Mail noted that the BC NDP's influential labour allies were pressing for the government to continue with construction.

Turns out these labour allies were not the only interest group that went to work on this government the minute the election results were official. Everyone who stood to gain financially from "the biggest construction project in BC's history" pulled out all the stops. It is hard for us to imagine the relentless pressure that policy makers face at times like these. Just as their grass roots supporters merge back into every day life, they have to find the courage to rely on the certainty of their convictions and stand up to these interest groups. There are huge sums of money at stake for those who wish the project to proceed. So collectively spending a few million to make compelling arguments for the project and putting them in front of just the right people, is pocket change.

That's why over and over again we see good people elected that end up making bad decisions. Lobbyists don't necessarily try to influence the decision makers directly, instead they influence the people who influence the decision makers. Remember this video from Jody Wilson-Raybould, now Minister of Justice, where she was clear that this project was trampling on Native Rights? Now she has a provincial counterpart. This clip of now Minister of Energy and Mines, Michelle Mungall, where she was really clear about finding better ways of generating electricity is just as hard to watch. Michelle called it a 1953 solution to a 2016 problem.  Likewise George Heyman, Minster of Environment and Climate change has spoken out against this project and John Horgan himself has expressed deep concerns. And yet, here we are with a political decision that will very likely backfire on the NDP. 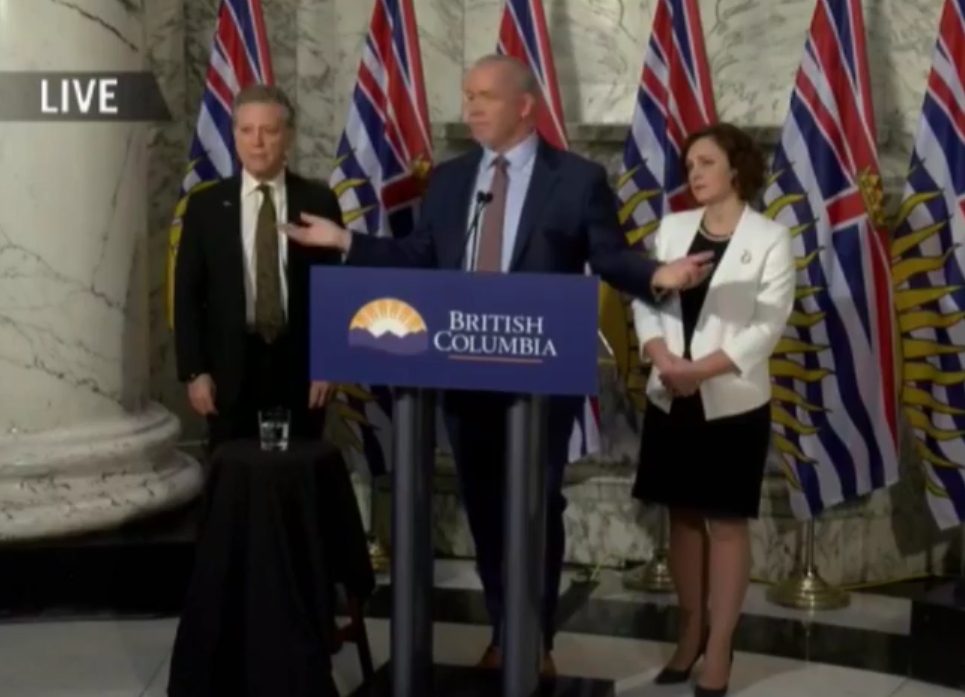 As Adam Olsen points out in this sad and somber video, government has once again chosen politics over sound, evidence-based decision-making. It's a pattern that is repeated over and over again and I for one find it very hard to believe that all these politicians, generation after generation, through the 40 some odd years of my adult life, are all deceitful. My heart went out to John Horgan and the two Ministers flanking him who are sworn to cabinet secrecy. They participated in a decision that in their heart of hearts they likely still knew was wrong. But in the end, just like the federal Liberals with Kinder Morgan, they let political agendas overrule their better judgement. And we need to hold them to account.

Elizabeth put it so well in her year end interview aired on CBC's "The House" yesterday when she said that we would all be much better off if we could take the political operatives and shut them away until the next writ period. Elizabeth quoted Adam when she pointed out that we need to put the emphasis on creating good policies instead of striving for political advantage. "I'd rather get Justin Trudeau to do the right thing on climate than celebrate a bad record when we come to the next election because the stakes are rather too high to be playing politics with whether our kids have a future." 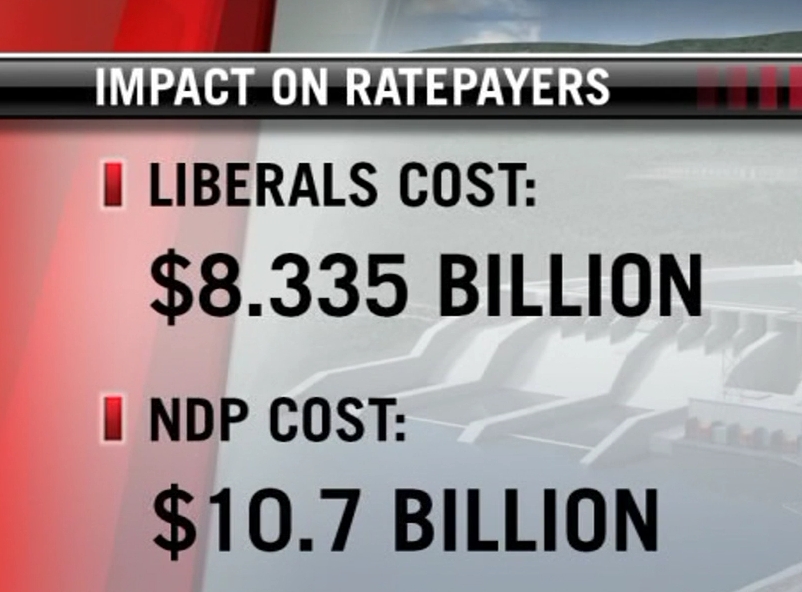 For all the faith that the politicians put into the strategist's advice, they don't always get it right. The media apparently didn't waste any time associating cost overruns on Site C with the NDP. As you can see by the spin in this graphic on CHEK news, what only cost the ratepayers $8.3 billion under the Liberals will cost them $10.7 billion under the NDP. That's how it's done. Influencing the narrative so that even those who report "the news" play into the spin of the moment.

Now that the decision is made that we are "past the point of no return," what will the NDP do when they are told it will cost $15, $18 or even $20 billion to finish? Will they fire them all and start again or just belly up to the bar and shell out more? What power do they have to prevent cost overruns? If they won't cancel at $4 billion, will they cancel at eight?

This excellent piece in the Tyee points out that few hydro dam projects ever deliver a positive return. Researchers know that energy alternatives that can be built sooner and with lower risk of schedule overruns, e.g. through modular design, are preferable. "The economic evidence shows that engineers severely and systematically underestimate the actual costs and schedules of large hydro-power dams." Maybe that's because when they go over budget, the engineers, suppliers, consultants, workers, unions, even the lawyers, everyone who has a stake in the project, benefits.

In comparisons, the modular design of competitive, distributed energy generation carries much lower risk. It is subject to continuous market forces and competition. Currently it costs about $36,000 to produce enough solar electricity to power a BC household for 30 years. And that cost is continuing to drop. With even a $10,000 subsidy from government homeowners across the province would happily pay the balance to become energy producers. To incentivize a transition to solar for the 400,000 homes that Site C is aiming to supply, would cost no more than $4 billion. Add that to the $4 billion it would have cost to cancel the project, and we would still be ahead by over two billion dollars. 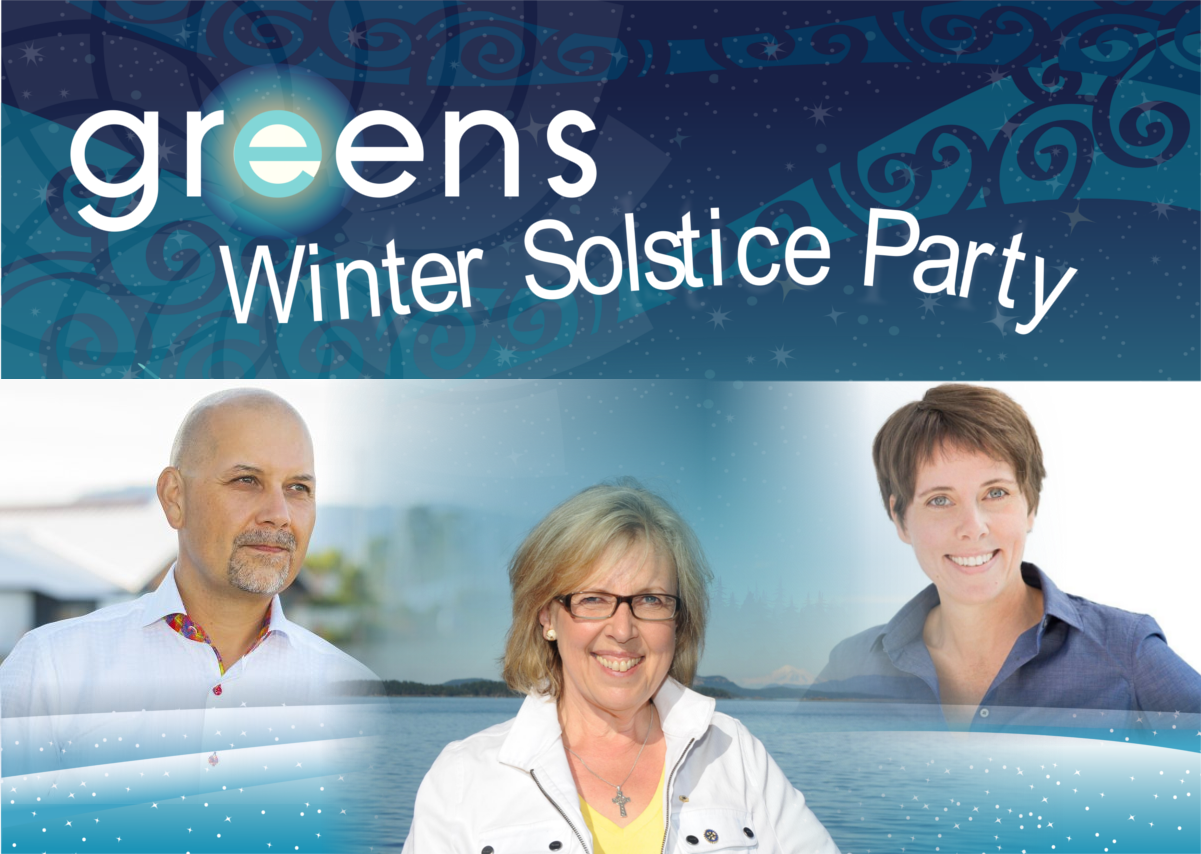 Clearly it's not enough to cast your ballot once every four years. The Site C decision reminds us again that democracy (and good governance) is too important to be left in the hands of politicians. As Greens we celebrate our commitment to forging better government. We pride ourselves on supporting policies that make sense no matter where they originate. And we stand firm on our principles when we need to call out the political games that cost us all dearly. Precisely because it's not easy to govern, Elizabeth holds Town Halls throughout her riding and Adam has flung open the doors of his constituency office, inviting the public to participate in Community Dialogues. They want to hear from you!

Democracy is not a spectator sport. It requires citizens like you and me to participate. Our representatives work hard for us. But they can't do it alone. They need us by their side and that's what federal Electoral District Associations (EDAs) and provincial Riding Associations (RAs) do. They mobilize and organize active citizen engagement. It is this constant engagement that keeps our democracy strong and offers us hope for a sustainable, fair and prosperous future.

So what are you doing Tuesday night? Well, you have an opportunity to hear from three of your Green champions and meet some fabulous people who are dedicated to good governance and responsible government. People who know that we all have a personal responsibility to secure a better world for our children and grandchildren. People who love this country, love this province and want to build bridges across the chasms that divide us. Come join us and meet active members of Green EDAs and RAs from across southern Vancouver Island. We will have fabulous food, live music and inspiring speeches from our favorite parliamentarians. For tickets click here.

See you on Tuesday!!!!
Thomas

P.S. If you know anyone who would like to come to the Solstice Party but is having trouble making ends meet, please let them know that because of the generosity of early bird ticket holders we still have a number of sponsored tickets on hand. They can be claimed on a first come first serve basis by emailing [email protected]


"It is our job to work tirelessly for justice, for peace, and for a planet that can survive with a human civilization that thrives. This is the challenge that we take on as Greens." Elizabeth May, October 19th, 2015

We do not wish to intrude.  If you would rather not receive this email once a week, please let us know right away. But before you go, please accept our pledge that this weekly exploration is not about fundraising. It's about the future. Our future. Yours and mine. In arapidly changing world that cries out for sustainable alternatives to vexing problems.

This weekly missive is authored by Thomas Teuwen, our SGI EDA Synergist/Coordinator. Opinions expressed are his own. We welcome your comments and feedback. If you were forwarded this email by a friend and would like to subscribe, simply click here. You can also go to the archives section of our SGI website to read back issues.

For the latest updates or to support our efforts, please visit our web site.

Our "Good Sunday Morning" blog is made possible by the generosity of sustaining donors like you.