Elizabeth May is Needed in All of the 2015 Leaders' Debates 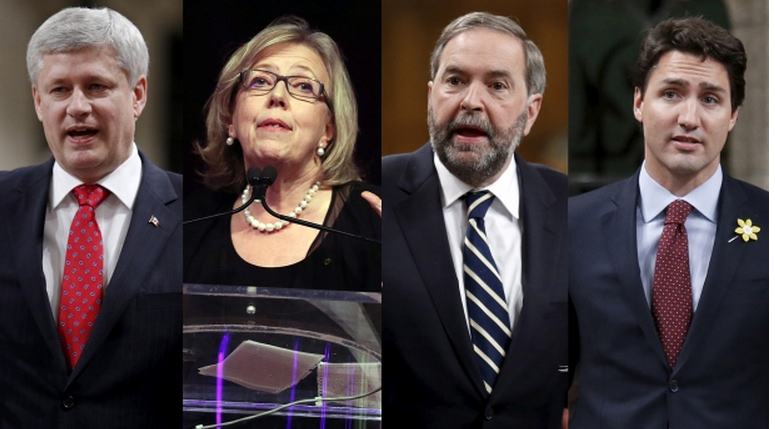 More than 80% of Canadians want to hear Elizabeth May in the 2015 election leadership debates. Yet Justin Trudeau is the only party leader so far who agrees Elizabeth should be in all of the debates. Thomas Mulcair remains mute and Harper continues to evade any discussion of it.

Harper has refused to participate in the traditional debate hosted by the media consortium (CBC News, ICI Radio-Canada Télé, CTV News and Global News). This is the debate likely to have the greatest reach across Canada, including remote communities across the country, because live-streaming and social media broadcasts are also included. In 2011, 14 million Canadians watched.

Instead, Harper is negotiating directly with other potential debate hosts. This means he can define the format and dictate who participates. The debates to be hosted by Munk Debates and the Globe and Mail are deliberately excluding Elizabeth May.

The first and, so far, the only debate with all four party leaders will be hosted by Maclean's/Rogers on August 6th (details below).

Canadians deserve to hear Elizabeth's voice in all the leaders' debates. Canadians, the business community, and other MPs recognize her strengths.

So, the big question is why exclude the 2012 Parliamentarian of the Year, the 2013 Hardest Working MP and the 2014 Best Orator? The Green Party has two MPs in the House, will be running candidates in all ridings across Canada, has more than 5% of popular support, and the majority of Canadians want to hear Elizabeth May in the leaders' debates.

Central Saanich resident Scott suggests, "Harper's afraid of debating such a skilled speaker with her knowledge and experience. And Mulcair thinks he won't shine as brightly if she is there. It's just cynical cowardice." 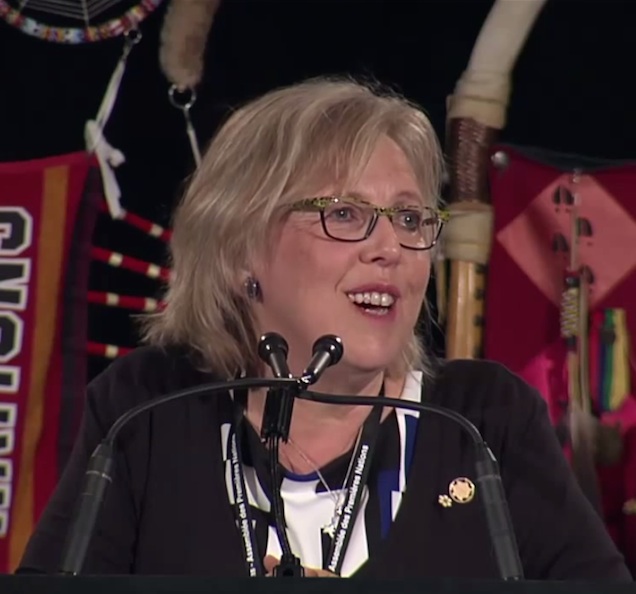 Elizabeth's talk highlighted the findings of the Truth and Reconciliation Commission, what needs to happen now, and how we need to learn from FN peoples to have stronger respect for people and our environment.

The Green vision for reconciliation begins with the formal recognition of the cultural genocide from the residential school system and its ongoing consequences. The second step is the creation of a new system for decision-making in partnership. Elizabeth described this as a better version of the council of the first ministers. The new council would have representation from federal, First Nations, provincial, territorial and municipal governments. Its mandate would be to work together, in respect, to collectively address the pressing challenges facing us all.

Help to make her vision of reconciliation a reality, please pledge your vote.  For more information on the Green Party platform, see Vision Green.

Where There is Smoke, There is Climate Change 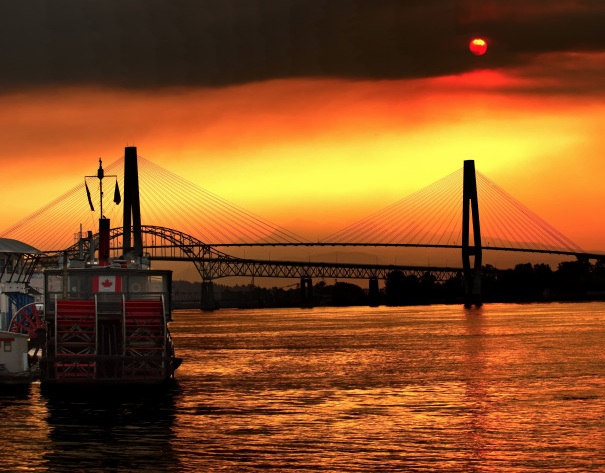 Many people on the south coast of BC recently experienced Beijing-type air quality. Many more communities across the province are affected by over 200 fires.

We worry that the smoky haze, fires, and the alarming red sun are the 'new normal' of extreme weather. Berries ripening 6 weeks early in this hot, dry summer may be great but the intense drought and the already over-budget fire season are a concern.

Experts say this early and intense start to the wildfire season is the result of a combination of climate change and an especially warm ocean. This is a realistic preview of our future without significant, immediate action on climate change.

Of the federal parties, only the Green Party has a strong and realistic climate action platform. Equally important, we have a leader in Elizabeth May who has actively participated in almost all of the United Nations climate negotiations. Only Elizabeth has the experience to be an effective negotiator for Canada.

Although the Liberals and NDP are beginning to echo Green climate policies, none of the other parties see climate change as the most urgent issue. With Elizabeth May in Ottawa, we have a federal leader who makes protecting our climate a top priority.

We all pay for the impacts of climate change on BC's fishing, forestry, tourism and agriculture, as well as the health consequences and increased firefighting costs. Canada needs Elizabeth May in Ottawa. You can help, donate to Elizabeth's re-election campaign. Let's send a strong message that Saanich-Gulf Islands will not stand by while our province and planet burn.

And What About Our Health? 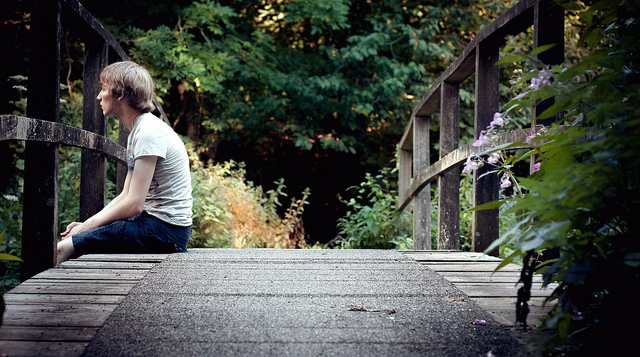 Poor air quality affects us all and so does our struggling healthcare system. The Harper Conservatives want a privatized system. Eileen, a North Saanich resident, puts it bluntly, "Harper has quietly implemented measures that will destroy universal healthcare if we vote him back in this fall."

First, the 2014 Harper budget replaced the Canada Health Transfer with a per capita transfer. The result - it will be increasingly difficult for provinces with isolated or older populations, such as BC, to deliver universal healthcare.

Second, Harper's administration deliberately failed to renew the Health Accord between the federal government and the provinces. The new federal program pushes more healthcare costs onto the provinces, linking funding to economic growth. The result - during economic downturns, when Canadians need the most access to healthcare, the federal transfer will be reduced.

All of this paves the way to for-profit healthcare, something Harper voiced support for when he was president of the National Citizens Coalition, an organization first founded to fight our universal public system. The Harper Conservatives are good at ignoring the evidence. But it's clear that rates of devastating diseases, including cancer and dementia, are increasing. We are heading for a crisis.

We can't wait - Canada needs to develop a well-coordinated strategy across all levels of government to ensure universal access to quality healthcare for all Canadians. The Green Party has a strong healthcare policy platform to improve access, ensure all Canadians have a family doctor, and stop the privatization of cleaning services that has increased hospital infection rates.

Elizabeth May has championed the creation of a national strategy for elder care, called on the House to develop and promote a national pharmacare plan, including a federal bulk purchasing agency to reduce the costs for provincial healthcare. She understands the impact of a for-profit system where the wealthy can go to the front of the line and access advanced drugs and treatments, while people with the greatest needs can't find family doctors.  Support Elizabeth's fight to restore and build our universal healthcare system, by volunteering for her re-election campaign. 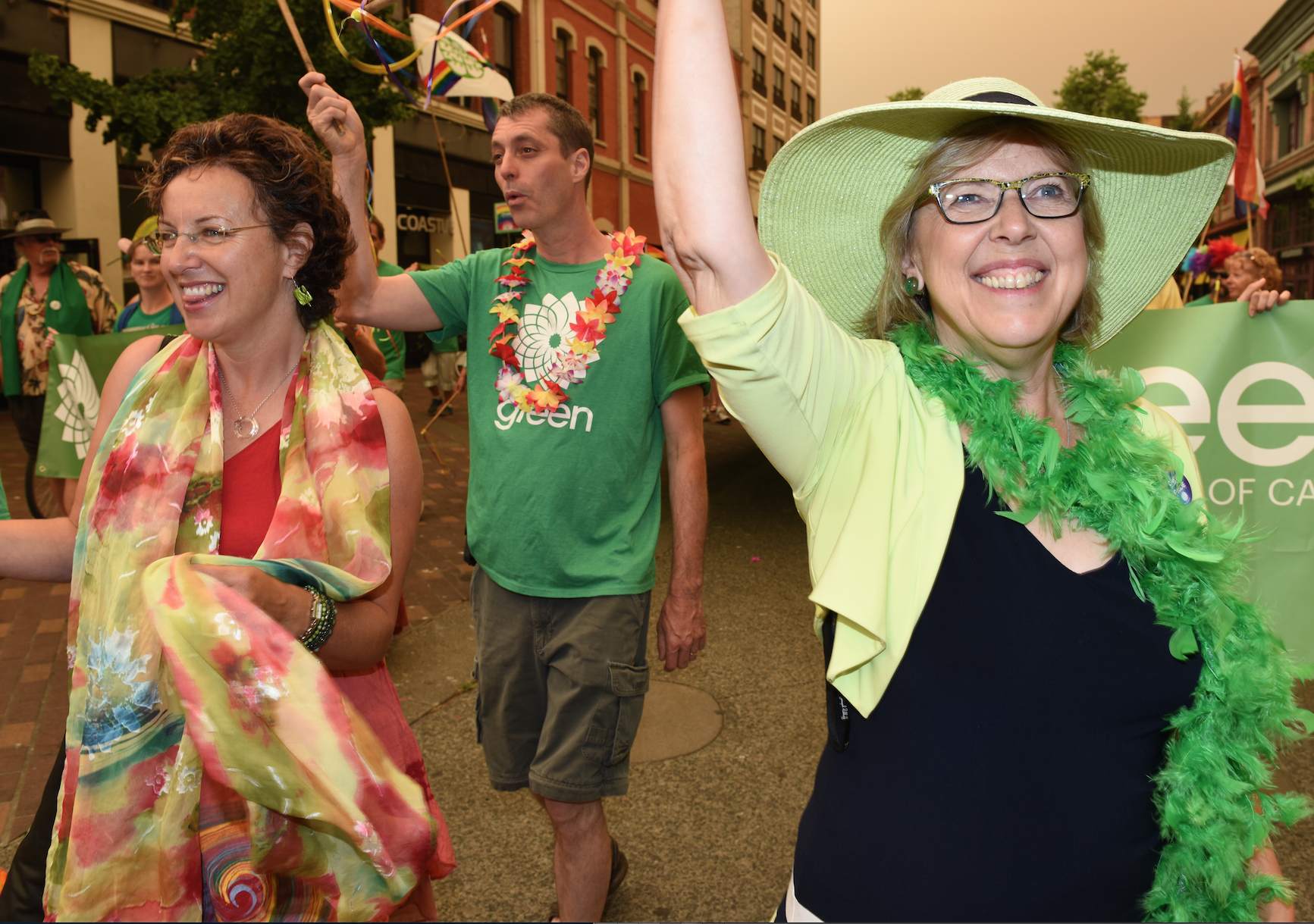 After the parade, voter registration was the theme at the well-attended Green Party booth in MacDonald Park.

Show your pride in Elizabeth by reserving a lawn sign for the 2015 election.

Canada’s hardest working MP continues to reach out and listen to her constituents, holding Town Halls in every part of the riding in June. Mayne Island will have the last Town Hall this summer on July 14th.


BC Greens Lead Protest on LNG Tax Break Legislation, July 13th, Victoria
The BC Liberals are dead-set on locking BC into a 25-year LNG (liquified natural gas) project development agreement which freeze the tax rates for LNG projects at unacceptably low levels and future governments won't be able to do anything about it. The rare summer sitting starting July 13th is specifically to discuss policy for the Petronas LNG project in Kitimat.

Andrew Weaver, BC Green Party MLA for Oak Bay-Gordon Head has a petition to protest the special tax legislation. The petition is available here.

When: Sunday 19th July at 2-4 pm
Where: Meaden Hall at the Salt Spring Island Legion

Garden Party with Elizabeth May, July 29th,  6:30-8:30 pm, North Saanich
All current and future volunteers are invited to Gary and Nancy's lovely garden in North Saanich for a meal and social time with Elizabeth May. The Harper era is about to end and we are thrilled to be working with Elizabeth to rebuild our democracy and take our country back. Come to the party and join us, share your stories and spend a relaxing evening in this marvelous setting. We will provide pizza. You are welcome to also bring food and drink to share. Please RSVP and get more information here. 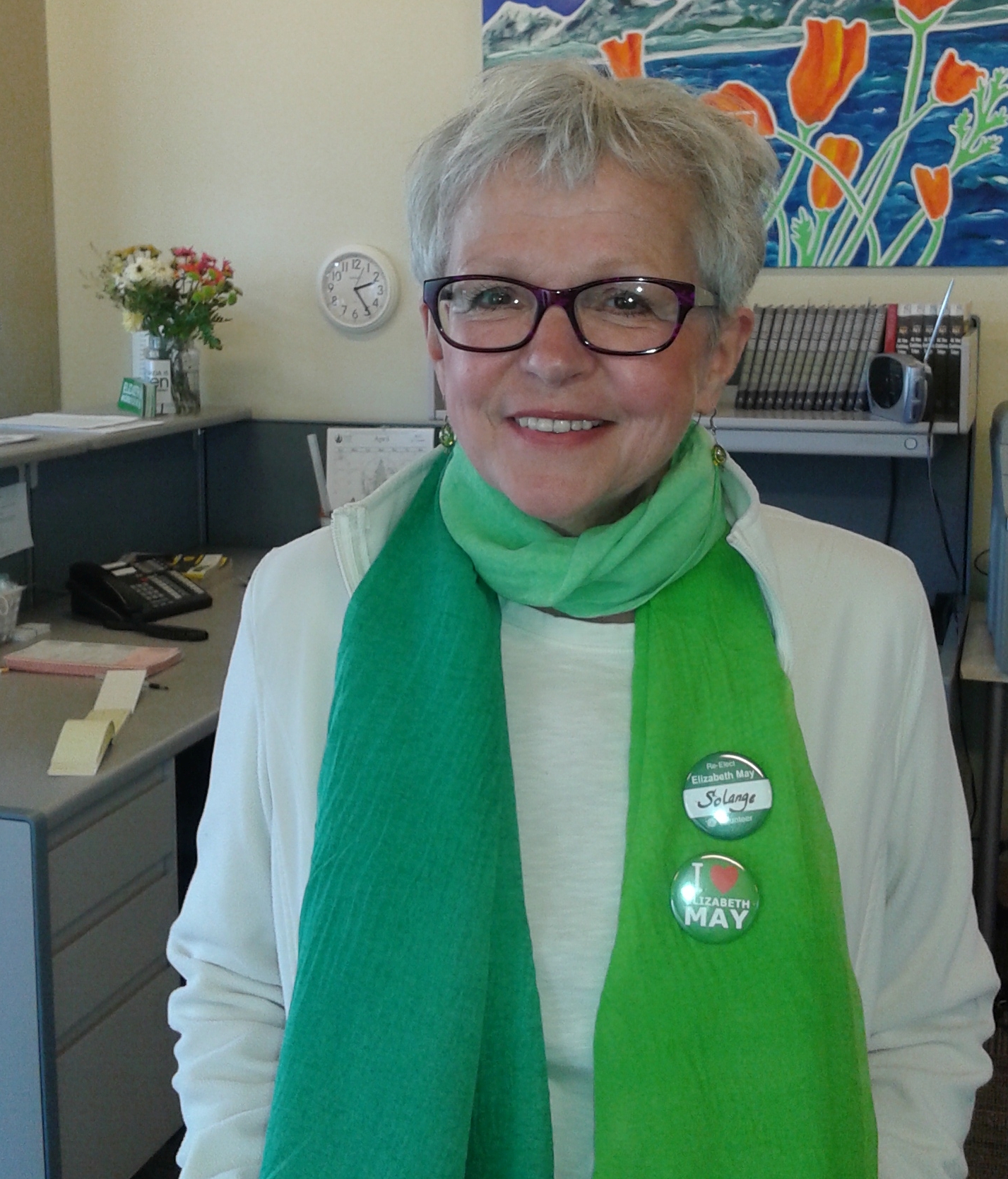 Come join the excitement - be part of the Green wave! Canada needs Elizabeth and we need to help her by re-electing her with a strong voter turnout. We need volunteers to help canvass - no experience needed.

North Saanich volunteer Solange Valiquette says, "I enjoy canvassing because it reinforces my faith in the value of the Green Party.  I am already a great believer and supporter of Elizabeth, but what tickles me is the enthusiasm of the younger generation.  I also appreciate the "Canadianness" of the people at their door, being polite if not already supporters for the cause. And I'd like to add, that Thomas is the best Canvassing Coordinator we can dream of!"

Please consider volunteering for the campaign.

Visit our YouTube channel to watch Elizabeth, volunteers and the growing Green community in action. Donations to the campaign are always welcome.