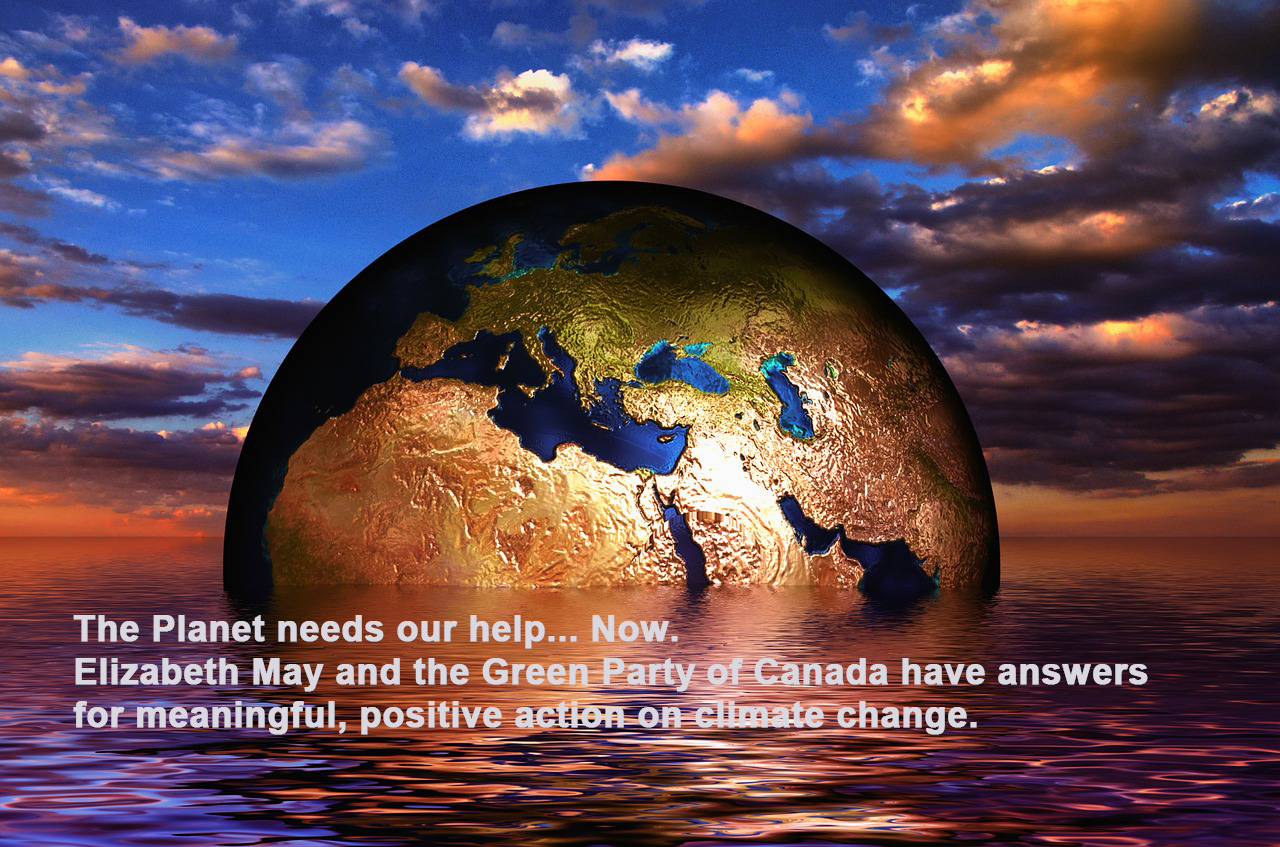 (OTTAWA) August 28, 2015 – Elizabeth May, Leader of the Green Party of Canada (Saanich – Gulf Islands), was one of more than 100 signatories to a letter sent to the provincial and federal government, as well as the RCMP, expressing support for the Unist’ot’en community’s right to defend their lands from oil and gas development.

“One of the significant concerns regarding Bill C-51 is language that can lead to legitimate protesters being seen as security threats,” said Ms. May. “The Green Party supports the Unist’ot’en and their right to provide consent for the use of their lands. I join Grand Chief Stewart Phillip of the Union of BC Indian Chiefs in denouncing any attempt by the RCMP to conduct mass arrests on unceded Unist’ot’en territory.”

“It is imperative that the RCMP does not provoke a conflict; it would be reckless and irresponsible,” continued May.

“This camp has been peacefully defending the land since 2009,” said Brenda Sayers, Green Party candidate (North Island-Powell River), “Why would the RCMP choose now to contemplate mass arrests? Is it related to the election?”

“The good people of this camp are defending their responsibility for stewardship of the land. Their rights were reaffirmed by the Tsilhqot'in decision last summer. The people of the Unist'ot'en Camp are peaceful. Police escalation is inappropriate and dangerous,” said Lynne Quarmby, Green candidate in Burnaby-North Seymour.

“It is necessary and important that our governments and the RCMP know that we are watching and that we care. We care about the people in the camp and we care about the land that they are protecting. Especially in election time, when there is temptation to use these types of issues as hot-button issues, we must all remain calm,” continued Quarmby.

A total of eleven companies are currently proposing to run oil and gas pipelines through Unist’ot’en territory, but the Unist'ot'en have not given their consent for the project, and continue their blockade of the area.

Other signatories include Union of BC Indian Chiefs, BC Assembly of First Nations, Canadian Union of Public Employees Local 718, Idle No More, Council of Canadians, David Suzuki, and Naomi Klein. A full list of signatories and the letter is available here:http://goo.gl/forms/BbthxPNRmh

“This earthquake confirms that fracking is a dangerous and environmentally irresponsible practice,” said Ms. May. “An earthquake of this magnitude could have devastating implications for the environment and the Halfway River First Nations community.”

According to B.C.'s energy regulator, many earthquakes have been caused by hydraulic fracturing or the "fracking" process that energy companies use to extract gas. Studies have linked fracking with earthquakes in the U.K., Oklahoma and B.C.

Stephen Harper closed Canada’s only emergency preparedness college and eliminated the Joint Emergency Preparedness Program. A 2014 report from the B.C. Auditor said that the province’s disaster response was woefully inadequate. Greens support working through our proposed Council of Canadian Governments to strengthen Earthquake Monitoring and disaster response. The Green Party also supports the elimination of all fossil fuel subsidies, including fracking subsidies introduced in the 2015 Budget.

“The link between earthquakes and fracking has been proven, so why does Stephen Harper continue to allow fracking, while providing subsidies to big oil companies? The Green Party is against subsidies and supports to the oil, coal, gas and coalbed methane industries in Canada. These industries are not sustainable and contribute to greenhouse gas emissions.”

“Canada must invest in sustainable energy and the Green Party is committed to working with the renewable energy sector to accelerate the construction of green infrastructure. Clean energy jobs are better for the Canadian economy, people and environment. We must focus on the future, one that does not involve putting our environment at risk.”

Green Party Says No to Risky Pipeline and Tanker Schemes

“Every pipeline – whether it’s Enbridge’s Northern Gateway, Kinder-Morgan’s expansion through Burnaby Mountain to the Burrard Inlet, Energy East, or Keystone XL, are all about one thing: getting raw, unprocessed bitumen to coastlines,” said Ms. May. “These pipelines and supertankers are premised on a risky economic strategy. We have already seen how Harper’s strategy of putting all our eggs in the bitumen basket has hurt our economy. On top of that, one accident could cripple the entire billion dollar fisheries and tourism industry upon which our coastal communities depend. It is time to think like a country again and develop a national approach to a diversified energy strategy.”

Working with all other parties in the next minority Parliament, Green MPs will:

Lynne Quarmby, Green Party Science Policy Critic and candidate (Burnaby-North Seymour), became the face of public opposition to Kinder-Morgan’s pipeline expansion when she was arrested as a protester on Burnaby Mountain in November 2014.

“I am opposed to any expansion of the oil sands and resulting pipeline and tanker projects. Any new infrastructure for transporting diluted bitumen to tidewater, or for export in any direction is inconsistent with avoiding dangerous levels of climate change,” Dr. Quarmby stated. “Unfortunately, Stephen Harper aggressively supports a reckless strategy that endangers communities. The other parties, notably Thomas Mulcair’s NDP, refuse to stand against risky pipeline schemes that Canadians oppose. If Mr. Mulcair is truly sincere in his efforts to avoid catastrophic climate change, then I call on him to give a clear answer on whether he opposes the Kinder Morgan expansion and Energy East pipeline.”

“We remain firmly opposed to all transport of bitumen destined to be exported through Québec. A rubber-stamp from a flawed environmental assessment will not change our position,” said Daniel Green, Deputy Leader of the Green Party of Canada and candidate (Ville-Marie – Le Sud Ouest – Île-des-Soeurs).

“These supertanker and DOT-111 pipelines do not bring anything more to Québec but danger, damage;s and additional costs to taxpayers. They do not offer a future for our youth, or a source of income for Québec residents. The people of Québec are internationally recognized for their artistic, medical, and scientific achievements, and we are proud of this. We don’t want to see toxic bitumen, which is also responsible for the climate crisis that threatens our population, pass through our beloved province.”

Elizabeth May has often commented on how the Harper administration not only avoids any meaningful action on climate change, it has actively blocked progress: "At this point, we are missing our obligations to the world, to Canadians and to our children".  The recent G7 talks concluded with vague, far off goals - deep emissions cuts in 2050. Canada and Japan were the nations that blocked efforts to commit to no fossil fuels by 2050, moving the deadline to 2100. Apparently, Harper is fine with leaving the legacy of climate change to his great-great grandchildren. He adds insult to injury with his comments on the need to identify low emissions energy technologies. Most of the developed and developing economies, and of course residents across the Gulf Islands, are already actively using these ‘yet-to-be-discovered’ clean energy sources.

Canada also missed the deadline for submitting greenhouse gas reduction targets for the upcoming climate change summit in Paris (COP21). The even more absurd excuse this time - a need to check with the provinces and territories first. The Harper administration has made no efforts to consult with the other levels of Canadian government. Worse, its unfettered promotions, lobbying and tax breaks for oil sands development nullifies the reductions achieved at the provincial, territorial and municipal levels.

We can move Canadian climate change policy into the 21st century, stop the Harper regime's denial of reality and recognize and address our impact on the planet. It is critical to halt the current and deliberate assault on research identifying the environmental and social impacts of our resource-extraction economy. We must invest in innovation that considers the total impact of our actions and inactions on the climate system.

To restore Canada's positive leadership role in addressing this critical issue for humanity, Greens will:

In BC, our peoples and places are threatened by careless resource extraction, inaction on climate change, and provincial and federal governments with little respect for our natural systems. Climate change is warming waters, acidifying the ocean, increasing the number and intensity of droughts and floods. This creates havoc with our forests, fisheries, water supply, and agriculture. The lax, unenforced or simply uninformed regulations that govern resource extraction and transportation are exacerbating the damage to our natural resources and the communities who depend on them.

See Elizabeth May's comment on the critical issue of our time - climate change, here in a brief video.

No Pipelines, No Tankers

In June 2014, the federal government approved the Northern Gateway Pipeline subject to over 200 conditions recommended by the National Energy Board and further consultation with First Nations.

This approval came in spite of the fact that a majority of BC residents are against the pipeline. First Nations whose territories are in its path have rejected it and Kitmat, the town that stands to benefit economically voted against it.

The proposed growth in pipelines and tankers is to serve only one purpose: to support Stephen Harper’s plan to increase oil sands production to 6 million barrels per day. In Copenhagen, Canada promised to reduce CO2 emissions from our 2005 level of 737 megatons (MT) to 607 MT by 2020. Under Stephen Harper’s leadership our emissions are on track to be 734 MT -- all progress on emissions reduction at the provincial level is being wiped out by growth in the oil sands.

This is why we oppose all of the proposed pipeline expansion, including Kinder Morgan's TransMountain, Keystone XL and Energy East. They put our planet in peril and prevent us from making the changes we need to make to reduce greenhouse gas emissions to an acceptable level. Lend your voice to help put a stop to reckless fossil fuel infrastructure expansion by signing our petition against more pipelines and tankers now.

The 1200 km pipeline carrying toxic diluted bitumen (dilbit) would pass through endangered wildlife habitats and the traditional territories of some 40 First Nations. Its construction would irreparably destroy some of Canada’s most majestic wilderness, and a leak or rupture would have devastating environmental consequences.

The tankers that would pull into Kitimat to meet the pipeline are another threat. To reach foreign markets, tankers would have to pass through the Douglas Channel, a narrow 320-km inlet crowded with islands (in contrast to images provided by the Harper administration). It is prone to storms, high winds and thick fog. Super tankers would pass through the Hecate Strait, which, according to Environment Canada, is one of the four most dangerous bodies of water on the planet. An accident is a virtual certainty.