The Site C project was approved in October 2015 by both the provincial and federal governments, after a three-year joint review panel overseen by the BC provincial government and the Harper regime. The joint panel stated that Site C would have severe and permanent adverse effects on traditional uses of the land by First Nations. The panel commented on the impact to local fisheries:

“the Project would cause significant adverse effects on fish and fish habitat,” and that “there would be a reduction to fish health and survival due to sedimentation during construction and headpond and reservoir filling.”

The federal government elected in November 2015 promised Canadians a new relationship with First Nations, based on respect for treaty and aboriginal rights.  In a recent interview with the Hill Times, the Minister for Fisheries and Oceans, Hunter Tootoo, stated that there will be consultations with First Nations before issuing a permit for BC Hydro to proceed with the project.

The Department of Fisheries and Oceans confirmed:

“DFO has received and is reviewing BC Hydro’s application for a Fisheries Act Section 35(2)(b) authorization for the Site C main civil works (i.e., dam, generating station, spillway, and associated works) and operations. DFO is currently consulting potentially affected indigenous groups prior to making a decision on issuance of an authorization.”

This may be the last opportunity to stop this massive, destructive project. The BC provincial government is still investing thousands of taxpayer dollars pushing the non-existent and unwanted Liquified Natural Gas (LNG) industry that would be the major benefactor of Site C.

Sierrra Club BC has a petition 'Respect for First Nations Means Stopping Site C' to stand in solidarity with the people of Treaty 8. Click here to sign.

Canada - A Refuge No longer? 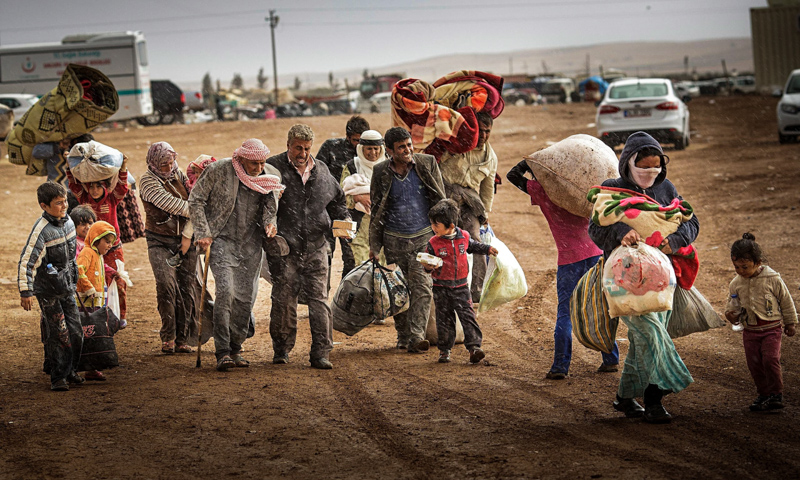 Canada no longer offers hope to desperate refugees trying to escape from conflict. In fact, the Harper administration has made it increasingly difficult through legislation that creates more hurdles to people seeking refuge in Canada.

For example, the 2012 legislation that designates some nations as safe (and thus these countries have ‘no refugees') was recently ruled unconstitutional because it is discriminatory and violates charter rights of refugees. Unfortunately, this only gives refugees the right to appeal - more red tape for people least able to deal with it, and equally troubling, this is only one of the roadblocks.

Our nation has not given the world the hope that this Turkish couple did when they used their wedding savings to feed 4,000 Syrian refugees.

The fear-mongering about potential terrorists is another smokescreen for inaction. Elizabeth blogged, "No one (except Stephen Harper) believes we help refugees by bombing one side in an ongoing civil war.  The truth is the refugees are not escaping ISIS. They are escaping a war that has been raging for four years while the world stood by and did nothing."

The Green Party sees a way to return to the compassionate Canada we want. With political will, we can provide better support for refugees and particularly those with the most urgent needs. We can revoke all the changes made to Canada’s refugee laws under Harper. Using some of the unspent $350 million for refugees that Harper used to declare a 'surplus', we can accelerate the processing of refugees and help people out of zones of conflict

Canada can actively work for peace in the region by helping to address the ongoing drought in the region. Many believe that this was the trigger and continues to stoke the crisis in the Middle East. It is time now to restore Canada's reputation in international affairs - from peace-keeping to real climate action. Prevention is the best cure.

First, buried in the 2014 federal budget is a move that replaces the equalization portion of the Canada Health Transfer (CHT) with a per capita transfer. The result - it will be increasingly difficult for provinces with isolated or older populations, such as BC, to deliver universal healthcare. This one change will create a $16.5 billion funding gap for the have-not provinces over the next 5 years. The only province to benefit from the change is Alberta, with its growing, younger population.

All this paves the way to for-profit healthcare, something Harper set out to achieve since his days with the National Citizens Coalition, an organization first founded to fight the national healthcare system.

The Truth and Reconciliation Commission's (TRC) report on the ongoing trauma from the residential school system was recently released. The Harper administration’s participation was marked by its virtual silence. This sad chapter of Canadian history must be fully heard. The consequences continue to reverberate. We cannot say 'we didn't know'.

Truth telling begins the process of healing. Reconciliation needs much more. It has never been so important for Canadians to work together for social justice. We can create a diverse Canadian culture of respect, acceptance and understanding, a Canada where all children are valued and treated with compassion.

In Elizabeth's words: "Reconciliation means forging new relationships in the light of this history - extending the respect and equality to First Nations that has been withheld for generations. These recommendations give us the means to work with aboriginal communities to begin to overcome the historical and ongoing injustices of brutal colonialism and cultural genocide. We can, and must, all take action to redress the legacy of residential schools."

On July 8th, 2015 Elizabeth's spoke at the Assembly of First Nations (AFN) Annual General Assembly in Montreal highlighting the findings of the Truth and Reconciliation Commission, what needs to happen now, and how we need to learn from FN peoples to have stronger respect for people and our environment.

The Green vision for reconciliation begins with the formal recognition of the cultural genocide from the residential school system and its ongoing consequences. The second step is the creation of a new system for decision-making in partnership. Elizabeth described this as a better version of the council of the first ministers. The new council would have representation from federal, First Nations, provincial, territorial and municipal governments. Its mandate would be to work together, in respect, to collectively address the pressing challenges facing us all.