Support for Bill C-51 is dropping. And as Canadians learn more about “the dangerous provisions” in the bill, our opposition grows. The proposed legislation opposes Canadian values of fairness, justice and the right to express opinions without fear.

Elizabeth May was the first federal party leader to denounce Bill C-51. In Parliament on February 2nd, she called the bill "so overbroad” that it “could apply to anything” and questioned its legality. Weeks later, the NDP also spoke against it. The Liberals continue to support it with amendments. And now opposition by Conservatives themselves is growing.

Elizabeth and a chorus of respected observers argue that the bill is so flawed that all Opposition parties should reject it outright.

Elizabeth first raised the alarm about the vague, expansive definition of ‘terror’ in the bill that could criminalize freedom of expression and legitimate protest, including non-violent civil disobedience and activities such as anti-pipeline and tankers protests. She was the first to recognize the sweeping new powers it gives to CSIS - creating a secret police. The horror of terrorism is very real, but this legislation does not address risks to Canadians and will not make us safer – rather, Bill C-51 itself has "dangerous collateral consequences” to our security and rights. 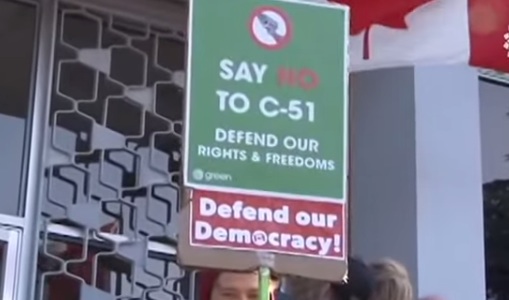 Elizabeth participated in the National Day of Protest against Bill C-51 on March 14th, along with thousands of us in Victoria, Salt Spring Island and across Canada, denouncing this attempt to stifle our right to peaceful protest and dissent.

A detailed bibliography of analyses, individuals and organizations objecting to C-51 is hosted by Lawyers’ Rights Watch Canada here.

As Elizabeth states so well, this bill fails to distinguish between terrorism and legitimate protest. Because it targets any activity CSIS considers may be a threat to the “economic and financial security” or “critical infrastructure” of Canada, Canadians who object to the Harper government’s obsessive public and financial support for fossil fuels, for instance, are vulnerable to being labelled as ‘terrorists’. The bill would allow CSIS agents to infiltrate and disrupt suspected terrorist groups. Suspects could be arrested without warrant and held in secrecy without trial. It is clear that this ‘anti-terrorism’ bill could “unleash CSIS on a lot more than terrorists”.

In response to Bill C-51, the BC Civil Liberties’ Association states “Criminalizing people's words and thoughts is misguided and won't make Canadians any safer. This new law will impose a broad chill on legitimate political speech without enhancing public safety, and is likely unconstitutional."

During the bill’s development, the Privacy Commissioner of Canada was neither consulted nor permitted to present to the review committee. He had to send a letter detailing his concerns about the impact on our privacy. 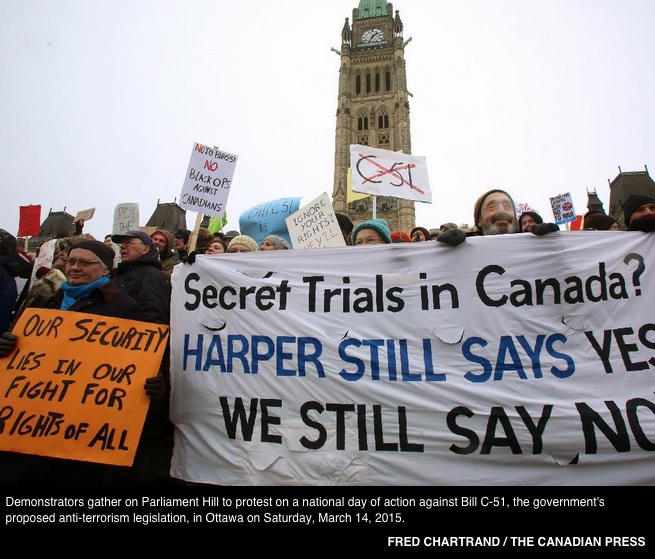 The bill gives broad new powers to CSIS, expanding its role from intelligence collection within Canada to include pre-emptive, covert action against anyone, anywhere suspected of ‘terrorist’ activity.

The bill authorizes CSIS to actively disrupt suspected threats to national security without parliamentary oversight. CSIS could act beyond the law, in Canada or globally, with minimal accountability.

In Why I am Fighting Bill C-51, Elizabeth notes that the bill “takes a system that is currently working quite well and threatens to turn it into a three ring circus, without benefit of a ring-master”.

Bill C-51 will protect the secrecy of information used by CSIS, including that supplied by other countries and obtained by torture. Allegations do not have to be verified or tested by a judge.

Most Canadians remember the case of Maher Arar, a Canadian with dual citizenship. Wrongly accused of terrorist connections, he was detained at a New York City airport, secretly transferred to Syria, imprisoned for 10 months without charge and tortured. It took years for Canada’s courts to find that there was zero credible evidence against him. Under Bill C-51, such evidence would never be tested.

Bill C-51 is the Wrong Approach

Bill C-51 not only fails to deal with the problem but could easily make it more difficult to identify potential terrorist activity.

Bill C-51 has no resources to enable communities to identify and help people at risk or to support programs to counter radicalization. 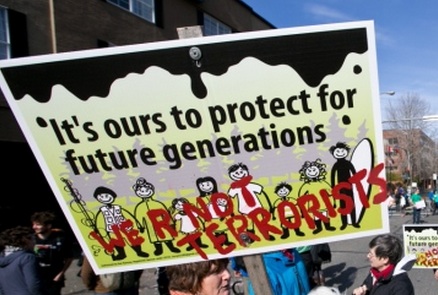 Now that he can no longer claim to be a good manager of the economy, many observers recognize that Harper wants to divert our attention from economic troubles by exaggerating threats.

Canada is one of the safest countries in the world. We cannot ignore terrorism but laws to deal with it already exist.

Bill C-51 is propaganda for an 2015 election campaign based on fear.

As part of her ongoing work to support democracy, Elizabeth led the way in exposing the flaws in this legislation, courageously opposing Bill C-51 when she was the sole voice in Parliament.

Bill Ward, stated in his recent Letter to the Editor, Times Colonist: "Canadians need to immediately make it clear to their MPs that Canada is no home for Bill C-51, secret police or any political party that thinks otherwise."

Pledge Your Vote for leadership that comes from a “vision of an equitable and sustainable future and from creating a path to reach that common future”.

Negative reaction to this bill is rampant. Concern for the implications of Bill C-51 on our democracy has broad and growing support across Canada. Here is a small sampling from social media; legal analyses; letters to the editor; articles and opinions in Canadian media e.g., Ottawa Citizen, Vancouver Observer; international and online media e.g., ipolitics.ca, Rabble.ca; protestcanada.ca; plus rants, blogs, and advice.

Official Opening: Campaign Office, Thursday 9 April, 7 pm, Saanich
Please join Elizabeth May, MP for Saanich-Gulf Islands and Frances Litman, Green Party Candidate in Esquimalt-Saanich-Sooke, for the open house for this shared campaign office. Elizabeth and Frances will speak. There will be refreshments and volunteer opportunities. Bring your chequebook! Please RSVP.

Re-elect Elizabeth May Campaign Sidney Office, Hours Changing
After Easter, the office at 2355 James White Blvd, Sidney will be open 10 am-4 pm Tuesday to Saturday.

Was this newsletter of value to you? Please let us know.