Why is Canadian LNG Largely Unregulated?

British Columbians need to have a say on the provincial government’s commitment to link the province’s economic future to a very large bet on LNG. The total number of plants currently proposed for BC approach in volume the entire current global capacity. Yet, any review of the global industry reveals declining demand. When examined for its greenhouse gas implications, the LNG bet is a bet against making our targets and avoiding catastrophic climate change. The natural gas in the BC industry is not conventional; it is fracked. And fracked natural g 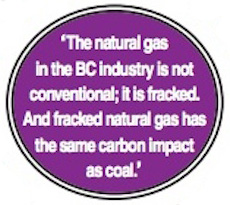 as has the same carbon impact as coal.

It is instructive to review the rules and regulations surrounding the LNG industry in the US and compare them to those in Canada. Whether one is for or against Premier Christy Clark’s commitment to tie the economic future of BC to the LNG industry, at a minimum, British Columbians would assume that the industry will be stringently regulated for the safety of all our citizens.

But the more I dig into it, the more Canadian regulation of LNG reminds me of the way Transport Canada regulated the railcars perched on the hillside above Lac Megantic, Quebec. It did not violate any Transport Canada regulation that highly dangerous Bakken crude was left unattended without the brakes on, in an antiquated rail car on a train track on the hill above the town. We know that the railcars rolled down hill creating a fireball that destroyed the centre of the Lac Megantic, killing 47 people. Following that disaster, Transport Canada began tightening up the rules.

We cannot afford to establish a highly dangerous industryin BC—or anywhere in Canada—without first ensuring we have a robust regulatory system to ensure public safety.

Liquified Natural Gas, while a fossil fuel, does not behave anything like crude oil or bitumen. It is highly volatile and flammable. It is shipped once it has been super-cooled to minus 160 degrees. Condensed it is smaller by volume. An accident causing LNG to leak will not coat our coastlines with a toxic and nasty crude-like mess.

A pierced hull can result in the ship going off like a bomb. Or the LNG can leak out and pool above the water. In the case of a leak over ocean water, the volume of LNG grows once escaped from its frozen condition on board. The rising water vapours from the ocean can convert it into a toxic gas cloud. Such a cloud could be enormous, covering a very large area. If it comes in contact with an ignition source, by, for example, floating back from the ocean to reach the land, there are many potential courses for the spark that sets off the toxic cloud. Then it can still go off like a bomb. Protecting adjacent populations, especially populated areas from such extremely unlikely, catastrophic events is the responsibility of governments.

In the US, there are two kinds of regulations to address these threats. One is a set back—or exclusion zone—preventing any other vessels, whether commercial ships, fishing boats or recreational crafts, anywhere near the LNG tankers. The setback zones can be as large as 1.5 kilometres in all directions from the vessel. The US government has specifically raised the concern of LNG vessels becoming the target of opportunistic terrorist attack. (No need to make your own bomb if the LNG industry does it for you.)

Canada as yet has no such exclusion zones. The previous government explained this by saying Canada did not have the same risk of terrorist attack. Odd, since the secret police act C- 51 was justified based on claiming Canada was being specifically targeted by jihadi extremists and we seem to think our airport security has to seize toothpaste in packaging that allows more than 100 ml of the dangerous stuff—but LNG tankers are just fine. I believe the new government will have to establish exclusion zones. LNG industry sources tell me they do not expect to have exclusion zones more than 250 meters.

Meanwhile there are also US rules about the proximity to populated areas along the travel routes to ensure toxic gas clouds cannot form and annihilate a community in an accident. In this the LNG Canada project proposed for Kitimat BC has already been reviewed in the TERMPOL process by Transport Canada. In a document prepared by Transport Canada, it is claimed that the best science used in the US, from the Sandia National Laboratories calls for avoiding critical infrastructure or populated areas within 250-750 meters. The report provides a footnote to a Sandia report. But when you go to that footnote, the zone considered at risk is not the 250-750 meters claimed in the TERMPOL report. In fact, Sandia estimates the danger zone at up to 1600 meters. Transport Canada will have to explain how and why they cited an erroneous margin for safety.

Lastly, within the US, there are regulations coming into force to deal with the amount of waste heat dumped into the waterways near the LNG plant itself. California has just taken action to phase out and ban single use water systems. So too has New York. The waste water does damage, particularly in smaller enclosed waterways, like Howe Sound or the Saanich inlet. Every new major LNG facility proposed in BC is being built to the new standard for zero discharge of waste heat. That is, every major new LNG facility, except the Woodfibre plant planned for Howe Sound and Steelhead LNG attempting to be approved in the Saanich Inlet.

In the case of Steelhead LNG the cooling will be done by taking in ocean water, and then dumping it back in the inlet, ten degrees hotter than the intake. The water will also be chlorinated. The volume at Steelhead’s facility will be 50,000 tonnes/hour of warmed water dumped back in our small enclosed inlet. At the least any LNG facility on our waterways must use best available technology of closed loop systems.

As a federal MP, I will apply my efforts at working to ensure regulations are put in place ahead of the approval of plants without proper regulation.

This article was published (March 24, 2016) in ‘Island Tides’, an independent, regional newspaper distributing on the Canadian Gulf Islands, on Vancouver Island and, via the internet, worldwide.’

To see this entire edition of Island Tides click here.