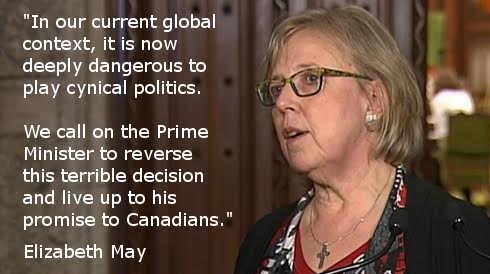 "Why am I so willing to give the benefit of the doubt? It is because I know how critical it is to keep hope alive. I do not want to feed the bad wolf. Citizen engagement and faith in the system are essential ingredients for our survival." ~Elizabeth May

How Justin Trudeau fed the wrong wolf
Our promising (pun intended) prime minister must take stock. This is a moment for urgent course correction. Do not feed the wrong wolf. Too much is at stake...
Read: National Observer, Elizabeth May, Feb. 2nd, 2017
Watch: CPAC News Conference Feb.1st, Elizabeth May on Electoral Reform 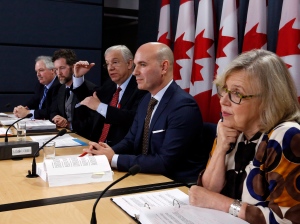 Listen in on CBC's The House for Feb. 4th:
Interview with Karina Gould 6:35min, What's next for electoral reform?

"Green Party Leader and special electoral reform committee member Elizabeth May isn't calling the time of death yet, hoping the government "recalibrates. "I don't want to give up," she said. "I think they will find rage from Canadians."

It's not too late - Tweet, email, post a letter, fax, or phone - Voice your Hope for Democracy: http://www.sgigreenparty.ca/30_ministers

"We, the undersigned, supporters of electoral reform, call upon the Government of Canada to 1. Immediately, declare its on-going commitment to ensuring the 2015 election be the last Federal Canadian election under the First Past The Post system."