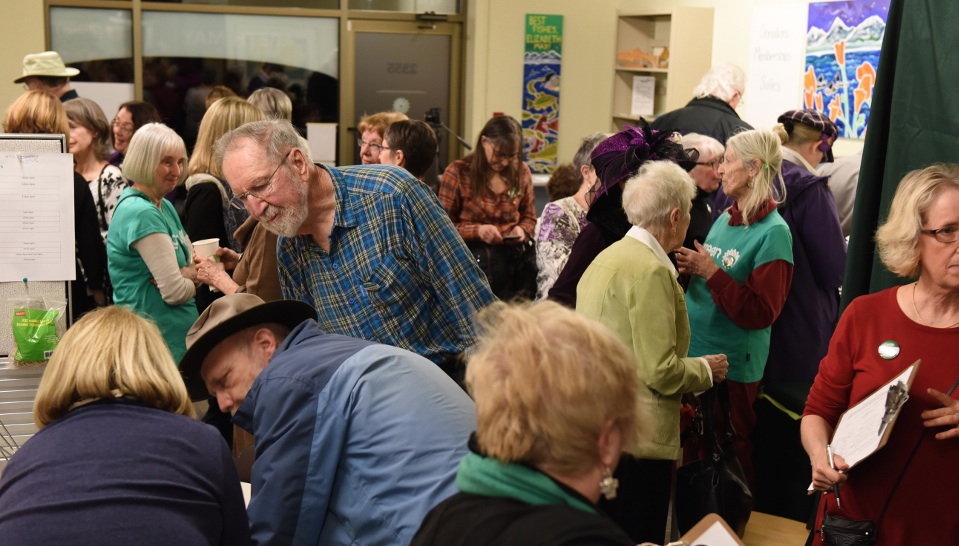 Standing room only at 2355 James White Blvd in Sidney!

An enthusiastic crowd of over 100 Green supporters listened to Elizabeth. They were eager to take on the challenge issued by Jo-Ann Roberts, Green Party candidate for Victoria, to see which riding will have the highest voter turn-out in 2015. Saanich Gulf Islands had nearly the greatest voter turn-out across Canada in 2011 (two small ridings in PEI did have a slightly higher percent turnout).

Thanks to the Greens and Leader Elizabeth May's demonstrated commitment to an effective Canadian democracy, an amazing roster of candidates is emerging. The Green Party of Canada has an excellent chance to grow the positive influence of Green values on our democracy: Mair Predicts: Greens Will Hold Balance of Power and Elizabeth May, Power-Broker.

Show Your Support for Elizabeth

We are so fortunate to have Canada's best MP. Elizabeth has done a phenomenal job. It is Valentine's Day - Show your love and appreciation for Elizabeth's hard work by pledging your vote.

Are You Registered to Vote? 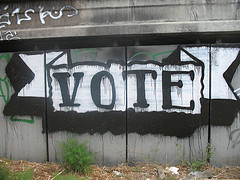 The changes in the election rules from the Fair Election Act (Bill C-23) affect us all – voter identification, new campaign-spending loopholes that favour the Conservatives (no receipts required for wooing big donors!), and the dramatic limits on Elections Canada.  Its as if the Act were designed to discourage voting…

All of us need to check our status on the Voters List - this is especially important if you have moved in the last four years or are a new voter. To ensure that you are registered to vote in the next federal election, check the Elections Canada website.  Follow the prompts to confirm that you are on the list and your information is current.

Please encourage your friends and neighbours and urge all first time voters to make sure they are registered.  Let's demonstrate that Canadian democracy is alive and show how we appreciate Elizabeth's work as our MP by increasing voter turnout. 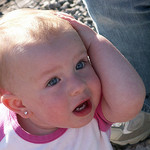 As Canada heads into the 2015 federal election, most Canadians are anxious to see Harper out.  And many of us are thinking about the Canadian habit of voting ‘strategically’ or, worse, wondering whether to vote at all.  The vote splitting myth and deliberate voter suppression are fundamental challenges to Canadian democracy.

In fact, the Liberals and the NDP's refusal to work together kept Harper's minority governments in power until they achieved their majority.

Vote Splitting – Myth and Reality The strategic vote idea is a handy tool for the Liberals and the NDP to push the vote-splitting fear button - essentially that a vote for a Green candidate will stop the other parties from moving Harper out.  This view simply serves Harper.  Telling Canadians that voting is risky, that you cannot vote for who you want because you might guess wrong and elect the ‘wrong’ party, is leading by fear.

The results: reduced voter turnout and a ‘majority’ government elected by a minority of Canadians.

Voter Suppression – Harper’s Best Bet As shown by the recent failures of so many pre-election provincial polls to predict the outcome of the “only poll that really matters”, the major challenge to Canadian democracy is not vote-splitting, it is voter suppression.  In the 2006, 2008 and 2011 elections, the single largest voting block was the shocking 9 million Canadians who did not vote at all; 37.5% of eligible voters. Voter suppression is in Harper’s interest.

George Monbiot recently commented, “if you never vote for what you want, you will never get it”.

The best response to vote-splitting fears is to elect Green MPs who will support any minority government that commits to a real climate plan and proportional representation. For more on why its important to  re-elect Elizabeth see Elizabeth May proves what one MP can do.

Elizabeth May is the only party leader to speak against the proposed Bill C- 51 Anti-Terrorism Act.  See some of the fallout for the other leaders.  Even mainstream media noticed!

Her recent article in The Tyee, Harper's Police State Law, highlights the significant threat to Canadian democracy, our privacy, and freedom of expression.  Her questions in Parliament to clarify whether this Act will apply to non-violent civil disobedience (e.g. protesters blockading a pipeline route) received the usual non-answers.

Take action, sign our Defend Our Rights and Freedoms petition.

Please show your appreciation for Elizabeth's dedicated efforts to lead the way to a more open, transparent and effective democracy by donating to Elizabeth May's 2015 re-election campaign. Your support is greatly appreciated!

Salt Spring Island Seedy Saturday, February 14th
Visit us the Green Party information table 10 am to 3 pm at The Farmers Institute. Ask questions and provide your input on the issues that matter most to you.