Kinder Morgan and the Carbon Bubble 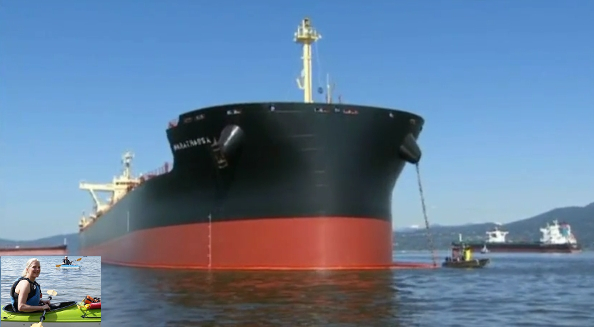 “That’s what is so frustrating — nobody’s interests in this have been served,” Adam told CHEK news. “Not the environment, not people, not industry and the economic interests have not been served.” Adam stands strong in his opposition to this five fold expansion of tanker traffic and explains why the Salish Sea is particularly vulnerable.

Both Adam and Elizabeth were intervenors in the failed NEB process and with your support, they continue their fight to expose the misinformation surrounding this issue.

Economist Robyn Allan wrote last October that Governments are being dangerously mislead: "There is no market for Alberta’s heavy oil in Asia. If markets in Asia ever develop it will take many years and Asian purchasers are not going to pay a higher price for Alberta’s crude than it commands in North America."

And that price is now being undercut by solar. Protests and court cases are great tools to show opposition and slow down the process. But we should also remember to spread the news that this just doesn't make economic sense nor is it in the best interest of Canadians. 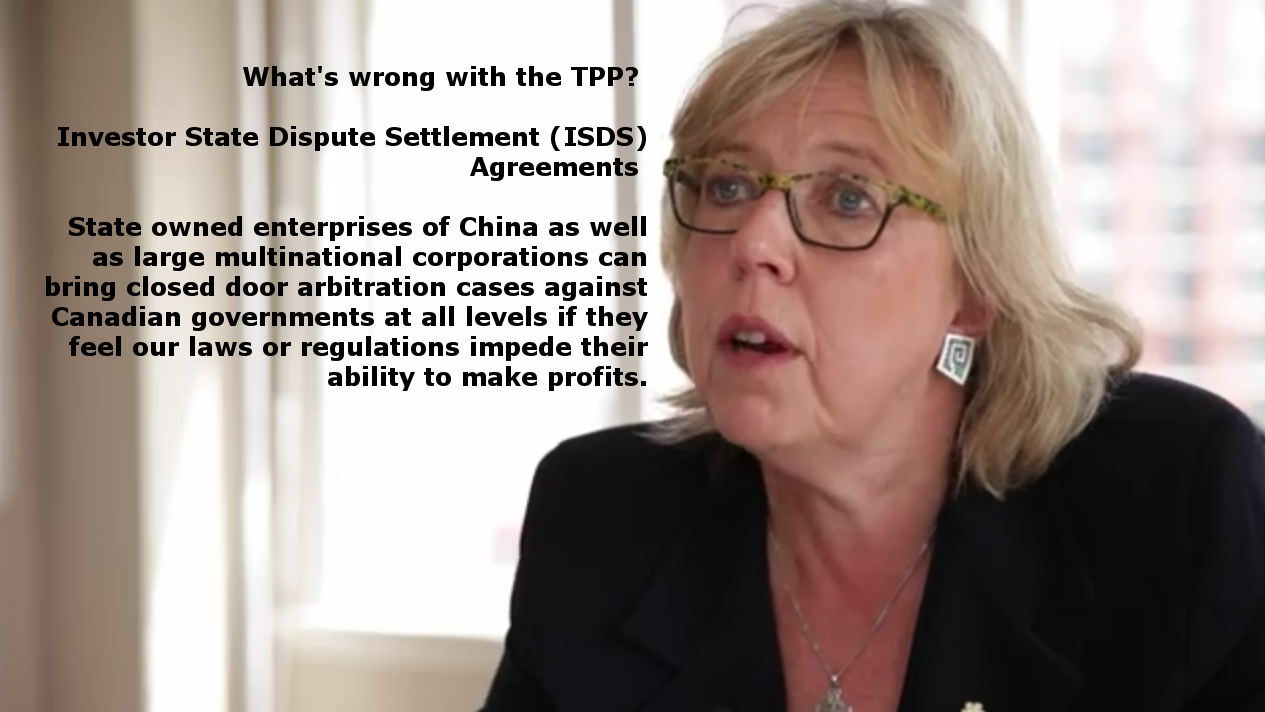 Almost a year ago Elizabeth wrote this about the ISDS agreements:

These provisions allow a foreign corporation to bring a challenge by way of private arbitration against a government if that government’s actions can be interpreted as “tantamount to expropriation.” Ever since Chapter 11 of NAFTA where this anti-democratic instrument first emerged, arbitrators have been willing to find that perfectly reasonable measures by governments have reduced foreign corporations’ expectations of profits.

“Tantamount to expropriation” ceased to mean anything close to actual expropriation. It has become a way for foreign corporations to threaten and punish governments for regulating to protect health, safety and the environment around the world. Trade lawyer Steven Shrybman once correctly described them as “fundamentally corrosive to democracy.”

The deadline for public submissions has been extended until January 27th. That's the same date that the submissions to what's been dubbed "the largest consultation ever undertaken on the Parks Canada Agency and its mandate." Just a little ironic considering the approval of a pipeline that will threaten the Gulf Islands National Park Reserve and its resident families of Orca.

“Let's Talk Parks, Canada!” invites all Canadians to share their views on Canada's national parks, national historic sites, and national marine conservation areas and on the Parks Canada Agency from January 9 to 27, 2017. For the first time ever, all Canadians are being invited to participate in the Minister's Round Table required by the Parks Canada Agency Act (1998). Tell them we don't want dilbit tankers in the Salish Sea.

The Carbon Tax, Tar Sands and other perils of town halls. 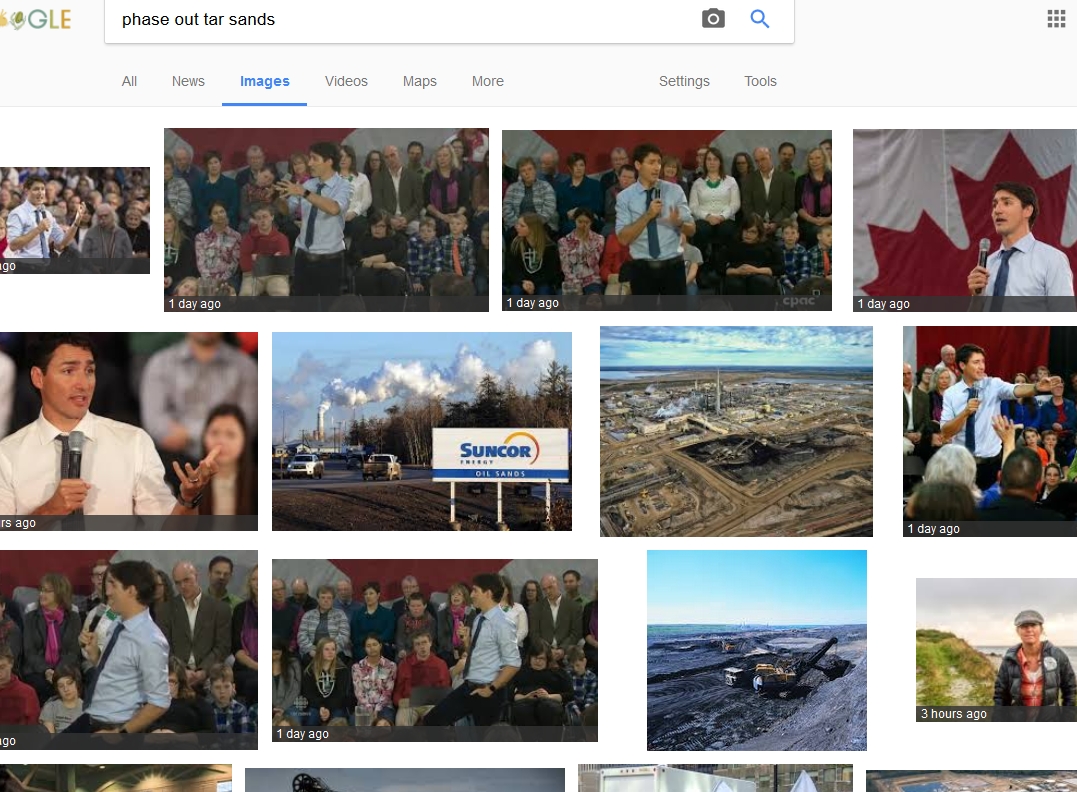 So Prime Minister Trudeau is back on the selfie circuit trying to strike a balance. It has to be every spin doctor's nightmare to have a leader answer questions in a town hall. Elizabeth does it all the time and will do it again next week but I suspect no one, half way across the country, will get their knickers in a knot over anything she says. She has been telling us the truth for years now and everyone expects her to be candid and forthright. But that's not usually how politics works and Canadians have a ways to go before we expect that level of authenticity from all our politicians.

Interesting that it was Trudeau's defense of the Oil Sands that got him into hot water because he 'wobbled' off his talking points and stated a hard reality. We will have to phase them out. A simple truth, in the context of a world that has embraced a 1.5 degree target, we must accept. But guess what, it will be the market, yes that impersonal, all-knowing, guru of the political right, that will force the hand of those that decide when this 2% of our GDP will have to be replaced with new, sustainable jobs. It is simply prudent to anticipate that timing and prepare for it. With solar breaking the $10 per barrel equivalent price barrier it's time to pay attention. Especially when you realize that dilbit sells at a 44% discount to light crude.

Two weeks ago we talked about Statoil, the $59 billion oil giant, selling its Kai Kos Dehseh (KKD) assets in Alberta's oil sands and then winning a wind lease off the coast of New York. Well this same oil company has also just invested in an Oxford University spinoff company that, like many others, is about to offer a 30% increase in solar cell efficiency. Furthermore they are also using their experience with semi-submersible oil rigs to help design and install semi-submersible wind turbines. Like so many smart energy companies they are shifting their investments from the past to the future.

When Elizabeth received the Conservation Eagle Award in Vancouver last week, she was recognized for her relentless work on climate change issues and her important contribution to the negotiations at the Paris conference. It's been a long battle and it's not over yet but there can be no doubt that the shift is under way. We just have to make sure that as a country we are not foolish enough to be the last ones investing in our version of Peabody coal.

Next week Elizabeth will start her January town halls.  It's also a time to say so-long to Elysia Glover. For the past two years Elysia has dedicated herself to choreographing Elizabeth's west coast schedule, flying by her side, keeping her on time and protecting per personal space. Now Elysia is moving to Ottawa to take over for Jaymini who is leaving the Hill Office to come out here and work on the provincial election. This creates an opening for a Member's Assistant to work out of the constituency office in Sidney.

We wish both Elysia and Jaymini success in their new roles. We will miss you Elysia.