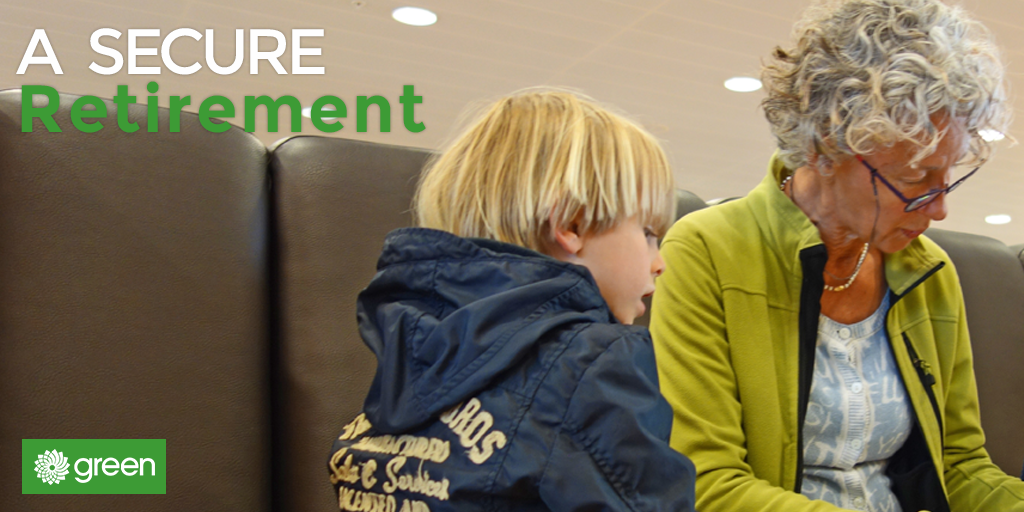 We are living longer. While this is unquestionably good news, a great many of us haven’t saved enough for a longer retirement. A weak economy has caused frightening collapses of some private pension funds, and younger Canadians are questioning whether the public system they are contributing to today will be there for them in future decades. At the same time, seniors want to remain active and stay in their own homes. Many seniors and health advocacy organizations, including the Canadian Medical Association and the Canadian Association of Retired Persons (CARP), support the creation of a National Seniors Strategy.

The Green Party commits to creating a plan to ensure seniors retain their dignity as they age.

In a wealthy country such as Canada, this is unacceptable. Eliminating poverty while supporting healthy communities will pay for itself in reduced healthcare costs, as poverty is the single largest determinant of ill health. Eliminating poverty will pay for itself in reduced crime rates. Failure to eliminate poverty will cost our society far more than an effective program to make poverty history in Canada. The Green Party supports the creation of a Guaranteed Livable Income to eliminate poverty in Canada.

The GLI would replace federal transfers for social assistance (welfare), disability supports, the Old Age Supplement (OAS) and the Guaranteed Income Supplement (GIS) for the elderly; the Canadian Child Tax Benefit (CCTB) and National Child Benefit Supplement (NCB) for parents with children; and the Working Income Tax Benefit for the poor – all of which are already very GLI-like. The GLI would not impact the Canada Pension Plan (CPP), the Quebec Pension Plan (QPP), social housing, or drug benefits. Less administration will result from a consolidated program.

445%: Generic drug prices in Canada relative to other countries

Canada is the only developed country that provides universal health coverage to its citizens, yet does not have a national Pharmacare program. Currently, 1 in 4 households cannot afford to purchase medicines as prescribed by their doctors.

Empirical evidence does not support the widely repeated claim that the growth in aging Canadians as a proportion of our population will drive up health care costs. In fact, according to the Council on Aging in Ottawa, the aging population contributes less than 1% to the growth in public health costs. However, 10% of seniors account for 60% of all public health care expenditures for those aged 65+. The Green Party of Canada will create a national Pharmacare program to provide affordable medicine for Canadians.

The Green Party’s plan expands and coordinates the patchwork of public and private schemes that already provide drug insurance to some twenty-two million Canadians. National Pharmacare would also ensure screening of all drugs for safety and effectiveness, by requiring that all provinces participate in the Common Drug Review to address drug safety (based on the approach of the University of British Columbia’s Therapeutics Initiative). According to the Pharmacare 2020 report released in July 2015, a national Pharmacare program would save Canadians up to $11 billion annually, while only costing the public sector an additional $1 billion annually.

90%: Percentage of seniors who deal with at least one chronic disease. Treating those diseases amounts to 60% of all senior health care costs.

Canada is the only country in the G20 with no national health care strategy. Continuing care is excluded from the Canada Health Act – in contrast, many Nordic and European countries have long-standing public, comprehensive, and universal continuing care programs. Those who need long-term care must stop being forced into emergency facilities that are not designed and are not equipped to deal with their needs. Every time someone cannot find a room sin a long-term care facility and is forced to go into a hospital, they are costing taxpayers. A hospital bed costs the taxpayer 6 times what a long-term care bed costs and about 20 times what home care costs.

Home care in Canada is currently a patchwork, with a mix of varied public and private services among the provinces and territories. As a result, Canadians’ access to health care at home has more to do with where they live than what they need. By establishing common standards across Canada, the federal government could make sure Canadians have equitable access to a certain level of care. The Green Party supports a national Aging in Place approach, modelled after the province of Ontario. This approach would ensure every Canadian can live in their own home and community safely and comfortably.

100%: The percentage of Canadians currently covered under the Canada Pension Plan (CPP)/ Quebec Pension Plan (QPP), including self-employed and those without a workplace plan.

In the spring of 2012, Stephen Harper surprised Canadians, including his own caucus, when he proclaimed from the World Economic Forum in Davos that Canadians’ pension system was about to change. In the 2012 budget, he changed the age at which Canadians qualify for CPP to 67. These changes were made without public or federal-provincial consultations, and ignored the advice of the Parliamentary Budget Officer and Ministry of Finance.

To help Canadians with their retirement security, the Green Party calls on the federal government to take the lead in building a consensus with the provinces to amend and expand the CPP/QPP by:

Currently the YMPE is set at $53,600, and an individual’s defined CPP benefit upon retirement maxes out at 25% of the YMPE up to the $53,600 maximum. This would require an increase in the contribution rate. (Under CPP rules, any new benefit has to be fully-funded so it would have to be phased in to build up enough capital to pay out benefits.)

42%: The percentage of personal capital that comprises a senior’s post retirement income

Green Party policies will create age-friendly communities, where active living and well-being are promoted, where seniors have financial security, and where housing and transportation needs are met.

Long-term care should not be the only housing and care choice. In a Balance of Care model, more care can be provided in a cost-effective manner by home and community support services.

The Green Party of Canada fully supports CARP’s Seniors’ Housing Strategy that allows seniors to stay in their own homes. Greens join CARP in envisioning small groups of seniors living together in a home they jointly own, with the support of a housekeeper. Seniors with similar lifestyles should be matched together, so they can share the costs of homemaking, medicine, and staffing support.

$33 billion: The combined direct and indirect costs of dementia and Alzheimer’s disease in Canada per year

The number one cause of dependency and disability in seniors is dementia.

Our healthcare system needs resources to deal with the increase in age-related diseases, particularly dementia and Alzheimer’s.

We need to significantly improve supports for family members. So often, a senior becomes the full-time caregiver for their spouse. Better respite programs, better supports for home care, as well as more beds in long-term senior care facilities, are urgently needed, with supports from both federal and provincial governments.

9: The number of Supreme Court Justices who voted in favor of lifting the ban on doctor-assisted suicide

We need to grasp the nettle of the thorny ethical problem of assisted suicide and the right to die with dignity. The Supreme Court of Canada has put the issue squarely before Parliament, but the Conservatives have ignored the urgency.

The solutions will not be simple because the problems are complex. Nevertheless, Canadians are demanding better answers. Greens will engage in a respectful, informed discussion, starting with a review of the various legal regimes in use around the world. We need to ensure that the discussion is grounded in bioethics and premised on an acute awareness of the slippery slope of creating the impression that some human lives are worth more than others. What we must not do is to continue to ignore the suffering of well-informed, adult Canadians who wish to make a choice to die with dignity in their own country.