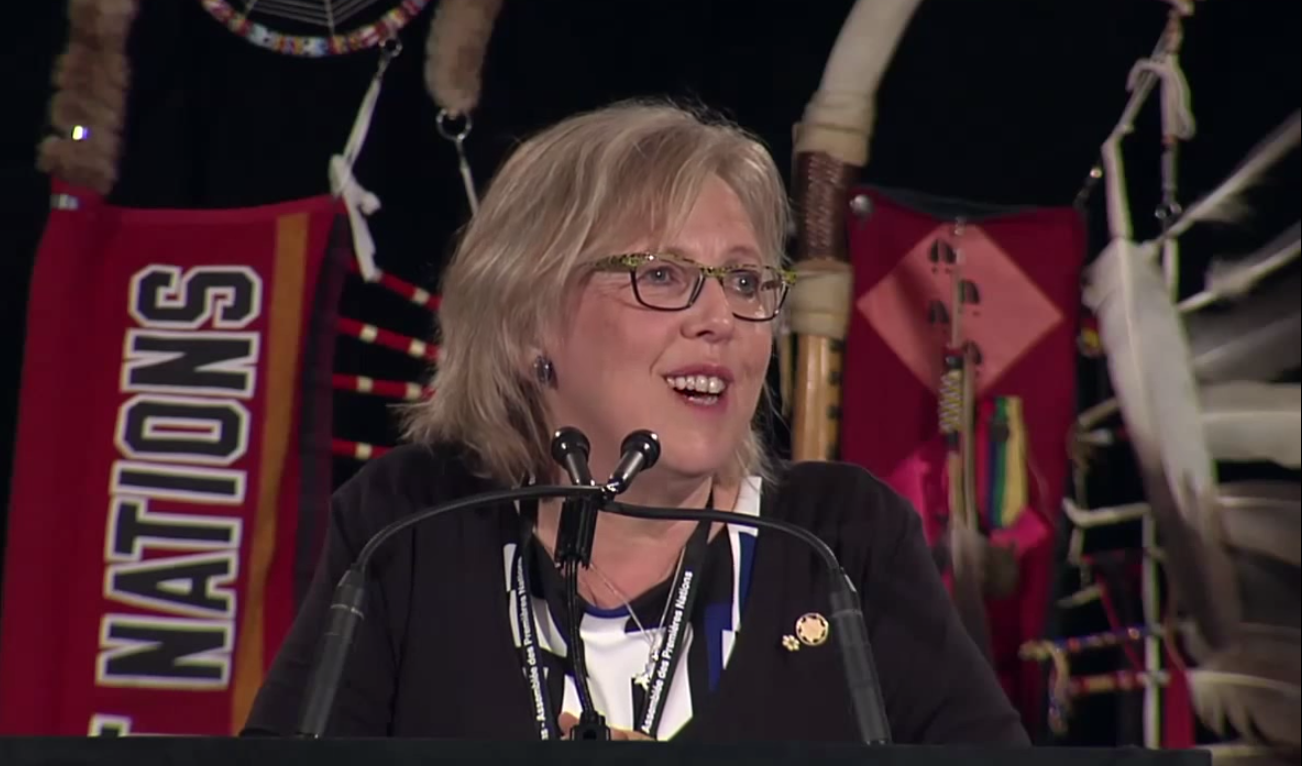 When voters in Saanich Gulf Islands elected Canada's 1st Green Member of Parliament, many people asked, "What can one MP do"? Let's look at what she has accomplished in just her first term:

1. Reports to us, her constituents in Saanich Gulf Islands twice a year in every neighbourhood. This is more than 80 public Town Halls with constituents since she was elected. She reports on what happens in Ottawa. answers our questions,and listens to our concerns.

2. Never heckles or participates in the shouting and childish behaviour in the House of Commons. When others heckle her.she waits for order to be restored,then continues making her point.

3. Publishes the original records of all her expenses on her website.

4. Treats other MPs with respect and kindness even when strongly disagreeing with their policy and style of doing business.

5. Has the best attendance record in the House of Commons of any party leader.

1. Saved the Plant Health Centre in North Saanich,with its 80 jobs,from closure.This was the only time out of dozens of announcements of closures of federal facilities across Canada,that the decision was reversed. Even Conservative MPs could not protect jobs in their ridings.

2. Obtained over 9 million dollars, the largest grant ever from the Western Diversification Fund,for the University of Victoria's Smart Oceans BC to support underwater observatories and monitoring of seismic activity along the coast. When U Vic needed more money, Elizabeth obtained another $20 million from the Ministry of Transport. The program employs many experts and researchers at UVic and supports high tech firms in the riding.

3. Assisted in obtaining $10 million for the Island Corridor Railway from Via Rail to improve the island railbed.

5. Affordable housing is a big issue on the Saanich Peninsula. Elizabeth Initiated a housing round table which led to the Saanlch Penlnsula Partnership working for affordable housing.

6. Advocacy for constituents: Elizabeth works tirelessly for constituents who experience personal issues with immigration,veteran's benefits,and other federal government agencies. This is a confidential service where the privacy of constituents is protected, but some have wanted to go public:

7. Support for Tourism: Elizabeth convinced the Finance Minister to reverse the decision to stop advertising for tourism in the US market. Funding was restored in the 2015 budget.

8. Canada 150 Grants: obtained major grants for the Panorama Recreations Centre and Pender and Saturna Islands in 2015.

1. First federal leader to raise the alarm about the new, so-called Anti-Terrorist Bill (C-51) that makes us less safe and less free.

2. Only opposition member of parliament to attend the United Nations Conference of the Parties (COP) under the UN Framework Convention on Climate Change in 2011, 2012 and 2014.

3. First parliamentarian to alert Canadians to the dangers of investor-state treaties, including the Canada-China Foreign Investor Protection Agreement and the Trans Pacific Partnership.

4. Prepared 6 Private Member’s Bills including the Federal Lyme Disease Strategy Act, which passed into law with unanimous approval of all MPs in the House of Commons and the Senate in December 2014. Fewer than 2% of all Private Members’ bills are passed.

5. Routinely proposes constructive amendments (over 1000 in the last two sessions of Parliament) to Omnibus Budget Bills and other Conservative legislation.

6. Stayed in her seat for 24 hours straight, defending the over 400 constructive amendments she proposed to the first Omnibus Budget Bill C-38, aka the “Environmental Devastation Act” (2012).

7. Had two of her amendments to the Pipeline Safety Act (2015) passed into law, requiring government to go after polluters for costs of an accident and empowering First Nations to do so as well.

8. Voted against bombing Libya in 2011 when a peace plan was on the table. She was the only MP to do so.

9. Got the Report of the Truth and Reconciliation Commission tabled in the House of Commons with the support of all parties.

Ronald Wright, author of A Short History of Progress:

“Elizabeth May is without doubt the most impressive party leader in Canada today -superhumanly hardworking, dedicated, smart, witty, and fearless when speaking truth to power and to the public.”

"Most acknowledge that Elizabeth May is Canada’s most effective MP."

Rafe Mair, BC broadcaster and writer:

“The Federal election is a bankruptcy of real choices. The outstanding candidate by far, and I apologize for damning her with faint praise, is Elizabeth May. It’s a shame that she won’t be prime minister. Far from being just and environmentalist, she has a firm understanding of the history of this country, the geographical distortions and demographic differences, and the sad state of our parliamentary system. She also has a deep love and understanding of our province.”

"Elizabeth May is the conscience of the country and her voice in Parliament guarantees that the voices of all Canadians who care about our environment and our land will be heard."

Vote Green. A Canada that Works. Together.

Authorized by the Official Agent for Elizabeth May